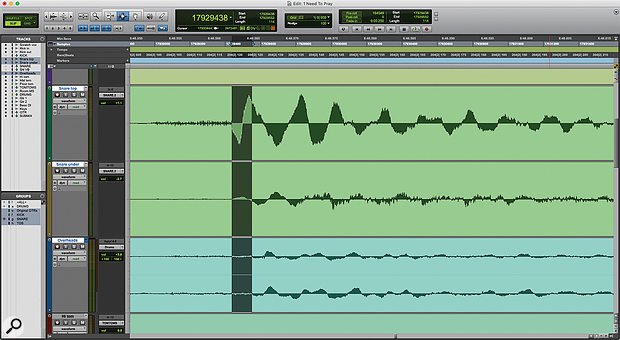 Measuring the delay between snare hits in the Snare Top track and in the Overheads track. Pro Tools reports the Length of the selection as 114 samples (centre, top).

Time-alignment can help solve problems in multi-mic recordings — but it can also introduce new problems!

From pitch-correction to noise reduction, our software DAWs offer endless scope for 'improving' recorded sound. All too often, though, these tools are used in ways that fully justify the use of inverted commas around the word 'improving' — and that's certainly the case with the subject of this article!

We often use close and distant mics on the same source, especially when tracking drums. There are also many occasions on which a mic on one source picks up spill from something else that's being miked separately. In these situations, the same sound reaches the different microphones at different times. Sound travels at about one foot per millisecond so, for example, an overhead mic that's six feet above the snare will 'hear' each hit about 6ms later than the snare's close mic. Set the horizontal zoom level in your DAW high enough, and you'll see that each snare hit on the overhead tracks is a little to the right compared with the close-mic track. Good engineers learn to place mics so that the close and distant mics work well together despite these microscopic time differences, and will invert the polarity on some inputs, where appropriate.

Today, we have another option: we can 'fix' such timing differences in post-production. This is done at the mix rather than during recording, and the process is often called time-alignment. Like any 'fix it in the mix' tool, though, time-alignment is not a universal panacea. Neither is it a substitute for getting things right at the recording stage. It is always a compromise, and an alignment that improves the sound of one source can have negative effects on others. A time-aligned multitrack is not objectively better or worse than a raw one. All that matters is whether it sounds better to you. Some engineers use it routinely, others disdain it altogether, but before you can decide for yourself, you need to learn how to do it...

Make It Easy On Yourself

As I've just mentioned, time-alignment is done at the mix stage rather than during recording. However, if you anticipate that you might want to use it, it's helpful to document your mic placement through photos and measurements. What can also save time at the mix is making the effort to capture an isolated, transient signal from every source position that you might want to correct. The key visual reference for setting up time-alignment is the waveform display in your DAW, but this is only useful if you can identify the same event on all the tracks that have captured it. That's fairly easy with an isolated snare hit, but it's impossible with, say, a legato bowed violin note with lots of spill. Hence it can be useful to get each musician to record a handclap or similar.

The snare top and bottom mics have produced quite different waveforms, but there's enough visual information here to suggest that reversing the polarity on the bottom mic and moving it a few samples ahead might create a better alignment.

The waveform of any event will be markedly different on all the mics that have captured that event, and will be 'upside down' on any mics that have captured it in opposite polarity. If you can identify an initial transient or a prominent zero crossing in all of them, you have a visual reference that can be used as a starting...