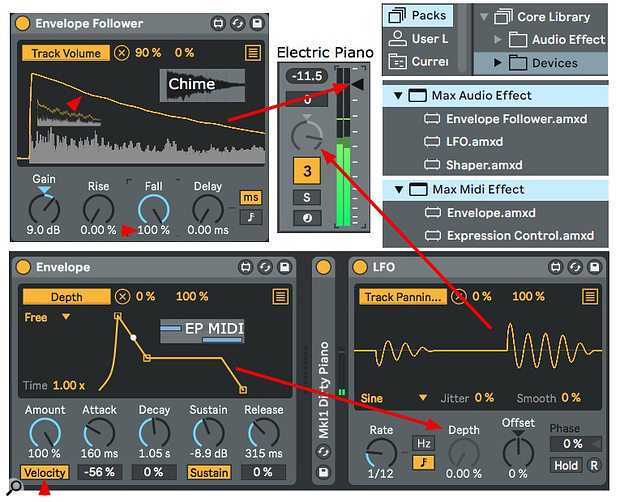 Live's Core Library includes five Max For Live devices that will generate and route MIDI Control Change (CC) messages to virtually any Live parameter. Need one more LFO or envelope to finish off that perfect synth patch? Need to pan the position of the train as it leaves the station? Want to simultaneously fade one instrument in and another out with custom curve shapes? One or more of these devices will get the job done.

Envelope and Expression Control are MIDI effect devices. You insert them on any MIDI track or before the instrument on any instrument track, and they respond to incoming MIDI messages, which they also pass through. Envelope Follower, LFO and Shaper are audio effect devices. You insert them on any audio track or after the instrument on any instrument track. All three pass incoming audio through without affecting it, but Envelope Follower also uses the incoming audio level to create its envelope. You'll find all these devices in the Audio Effects and MIDI Effects tabs of Live's Categories browser, but the easiest way to locate them is in the Max MIDI Effect and Max Audio Effect folders of Live's Core Library Pack.

With all of the devices except Expression Control, you assign their target by clicking the button labelled 'Map' at the top left of the interface and then clicking the control you want to modulate. Clicking the menu icon at the top right of the interface flips to a window offering eight Map buttons, the first of which shows the front-panel mapping. Each of the eight assignments has its own range settings. Virtually everything is fair game for modulation, but for plug‑ins you may need to first configure their controls for modulation.

The Expression Control MIDI effect is a bit different. It lets you map five types of incoming MIDI messages: Velocity, Modwheel, Pitchbend, Aftertouch and Keytrack (MIDI note number). Each instance of Expression Control offers five assignments, and you can select any of the message types for each. In addition to Min and Max settings, each row offers shape (Log or Linear) and Rise and Fall smoothing settings.

The example in Screen 1 (above) starts with an audio track playing a chime sample and an instrument track with an electric piano preset. The Envelope Follower audio effect shown at the top resides on the chime track and controls the mixer volume of the electric piano track. The chime clip creates the jagged envelope curve shown in the inset and the Envelope Follower's Fall setting of 100 percent smooths that into the falling envelope that modulates the piano track's volume. Notice that the Track Volume mapping range is 90 to 0 percent: high chime volume pulls the mixer volume all the way down (0 percent) and as the chime fades out, the volume returns to a bit over 0dB (90 percent).

The LFO audio effect (bottom right) on the electric piano track modulates the channel strip's Pan knob, and the Envelope MIDI effect (bottom left) on that track controls the LFO's Depth knob. Incoming MIDI notes trigger the envelope and the note velocity affects the LFO amount, which in turn controls the panning range. Of the two incoming MIDI notes shown in the inset, the first is of lower velocity, and the different velocities are reflected in the amplitudes of the two panning curves in the LFO graphic. 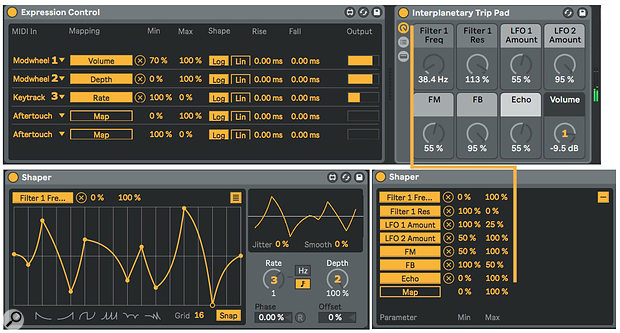 Shaper is a do-it-yourself LFO allowing you to draw in the LFO shape either snapped-to-grid or free. Its Rate ranges from a 64th-note to 32 bars in sync mode and from 0.01 to 10 Hz in free mode, and it offers Depth, Phase and vertical Offset controls. In Screen 2 I've routed seven of its mappings to the first seven Macro knobs of the Interplanetary Trip Pad Instrument Rack from the Ambient & Evolving Sounds section of the Core Library Pack. For hands-on control I've used the Expression Control device to map the Modwheel to Shaper's modulation Depth and to map Keytrack (note number) to Shaper's Rate — higher notes produce faster modulation. I've also mapped the Modwheel to the Instrument Rack's volume to maintain steady volume as the modulation increases. The Shaper map ranges shown are somewhat arbitrary but work well with moderate Modwheel settings.

Because all the effects pass incoming MIDI and audio data through without altering it, you can simply insert the CC devices on your tracks one after another as you need them, so long as the device type (MIDI or audio) matches the location. But I find it less cluttered and more convenient to add them as chains in device Racks: a MIDI Rack with a chain each for Expression Control and Envelope and an Audio Rack with chains for Envelope Follower, LFO and Shaper. You can duplicate each Rack's chains for more instances of the CC devices as the need arises, which is particularly helpful when working with instruments in need of extra LFOs and envelopes. When you use multiple chains you need to mute the output of all but one of them to avoid doubled MIDI and audio output. I prefer to insert a 'pass-thru' chain at the top of the Rack and mute all the others. The pass-thru chain is also handy for adding MIDI or audio effects to the incoming signal. Screen 3 shows the two Racks and setups for MIDI, instrument and audio tracks. The audio track setup is actually a Group consisting of a MIDI track holding the MIDI devices Rack and an audio track holding the audio devices Rack. That lets you use incoming MIDI or MIDI clips to control audio-effect and track settings. 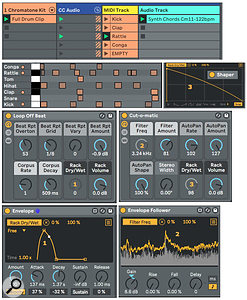 Screen 4: Two Core Library audio effect Racks' Dry/Wet mixes are modulated respectively by the Envelope MIDI effect and the Shaper audio effect. The Envelope Follower effect on the audio track modulates filter frequency and the LFO modulates track panning.Screen 4 shows this setup in action. The drum track holds the Core Library's Chromatone Kit along with a MIDI drum clip to play it. Four of the drum clip's kit-piece lanes have been extracted in separate clips, and those along with an empty MIDI clip occupy the MIDI track of the CC Audio Group. The audio track in the Group loops a synth chords audio clip from the Core Library. The Core Library's Loop Off Beat and Cut-o-matic audio effect Racks are placed in series on that track. Together they reshape the audio clip in various rhythmic ways.

The Envelope effect on the MIDI track is mapped to Loop Off Beat's Dry/Wet knob so that the notes in the clip fade the effect in and out over the length of the Attack/Release envelope curve. The Shaper effect on the audio track is mapped to Cut-o-matic's Dry/Wet knob to fade that effect out in four-bar loops. The Envelope Follower on the audio track follows the level of the audio clip and maps that to Cut-o-matic's Filter Freq knob. And the LFO (not shown) maps a four-bar sine wave to pan the CC Audio Rack's Pass-thru chain — that leaves the channel strip's pan control free for mixing. Using two-bar Follow Actions to sequence the clips on the MIDI track adds subtly changing contours to the synth chords audio clip sync'ed to the rhythm of the drum clip.

Electric, Live's physical-modelled electric piano instrument from AAS, is an interesting if not entirely realistic target for Expression, Envelope and LFO. Here are three things to try starting with any Electric preset: