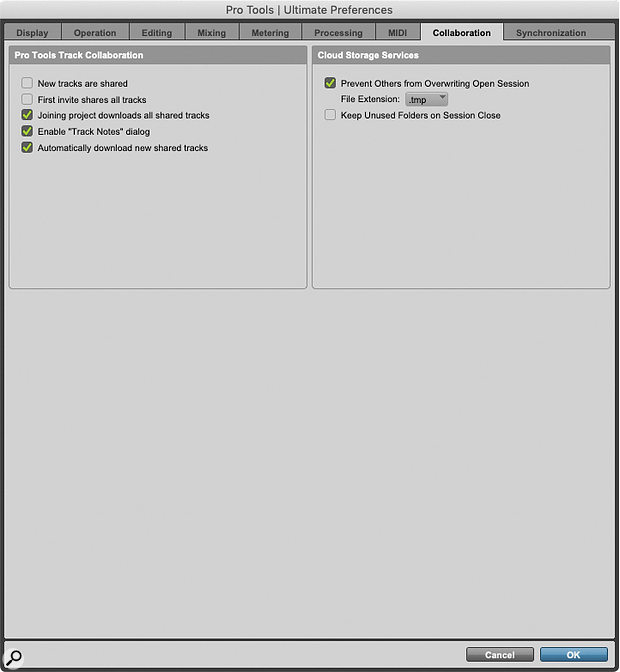 The newest version of Pro Tools brings some useful enhancements to project sharing, whether you're using Avid's Cloud Collaboration platform or a third-party cloud host.

May 2020 brought the second Pro Tools release of the year. There were no big, headline-grabbing additions like the Folder Tracks we've spent so long considering since Pro Tools 2020.3, but although the 2020.5 release didn't add much, it was accompanied by a long-anticipated EUCON update and a hint towards the shape that Pro Tools development might take in the future.

The list of bug fixes was as varied as these things usually are. Bug fixes are a necessary but thankless pursuit for software companies, but taking it as read that bugs are inevitable in software, the order in which they get addressed potentially offers some insight into what is being worked on. In light of the global events of 2020, the fact that at the top of the list of fixes are a series of bugs to do with cloud collaboration can't be seen as coincidental.

With the industry having had to adapt so quickly to remote and online workflows, it is little surprise that the cloud collaboration features introduced in Pro Tools 12.5 — see www.soundonsound.com/techniques/part-1-cloud-collaboration-pro-tools-125 — have come to renewed prominence. These online collaboration features received a mixed reception when launched in 2016 but in hindsight they could be seen as being ahead of their time, and they mean Avid have already done the groundwork necessary to prepare Pro Tools for collaborative workflows.

Now that Standard Pro Tools users are happily using what were previously Ultimate-only features such as VCA Masters, it's easy to forget that a lot of the motivation for the partial homogenisation of features between Pro Tools Standard and Ultimate was to allow easier exchange of Projects between users of those two products.

A principal issue facing people using shared drives, whether on a local network or cloud-based storage, is version control.

With use of Avid Cloud Collaboration having presumably grown, it makes sense for Avid to have prioritised fixes related to those features. And it sounds like some significant issues have been addressed, such as improved reliability when uploading and downloading media from the cloud, alongside more nebulous fixes including a "series of errors that can occur when creating a new project".

This concentration and prioritisation of remote working goes beyond Avid's own Cloud Collaboration platform. For those of us who just want to work with locally based Sessions but want to share them with others using cloud-based exchange systems like Dropbox, Google Drive and Microsoft OneDrive, there's a new set of preferences which promise to make the process significantly easier.

A key issue facing people using shared drives, whether on a local network or cloud-based storage, is version control. If two users open the same file at the same time, changes will be lost somewhere along the way. Sophisticated revision software exists for large projects, but in the case of Pro Tools 2020.5, some simple preferences go at least part of the way towards avoiding these issues when working with cloud-based Sessions (as opposed to Projects).

Under the Collaboration tab of the Pro Tools Preferences, you'll find a new tick box labelled "Prevent Others from Overwriting Open Session". Pro Tools automatically creates a temporary file next to the session file, on both local and cloud-based locations. This temporary file only exists as long as the Session is open and gets automatically deleted when the Session is closed. When this preference is ticked, if another user attempts to open the same Session they will get a warning that this file is in use. They can still work on the Session but will have to save a copy and work on that. It's simple, and in a lot of circumstances, is all that would be needed to avoid 'version hell'.

There is a related sub-preference in this section which allows you to set the file extension of the temporary file. Avid recommend a .TMP extension for use on network-attached storage, and this is compatible with legacy Pro Tools systems. However, as Microsoft OneDrive ignores .TMP files, there's also the option of using a .PTMP extension. There is an additional preference in this section which offers the option to keep automatically created unused folders, like the clip groups or video files folders, which usually get deleted when the session is saved if they are not used. This minimises unnecessary sync operations when sharing Sessions in the cloud.

It was a source of frustration to me that Folder tracks weren't supported by EUCON in version 2020.3, and so users of the Avid Control app and EUCON hardware surfaces weren't able to take advantage of the new features. This has been addressed in the new version, and even users without a control surface can access these features in several ways. 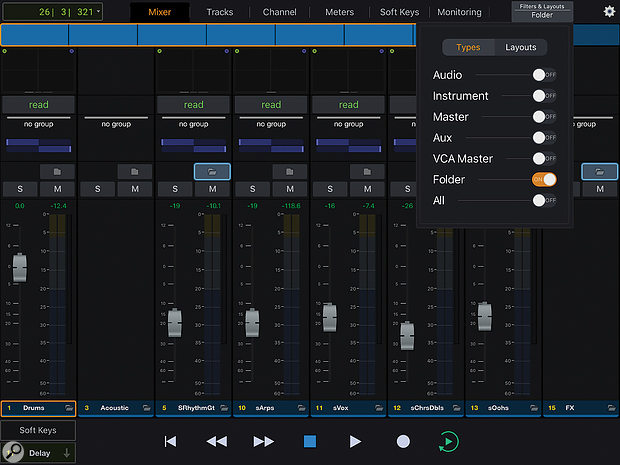 The Mixer window represents Folder tracks much like any other track, but with the addition of a Folder button above the Solo and Mute buttons. This functions identically to the Folder icons in the Mix or Edit windows. One potentially useful way to access elements of your Session, show/hide elements and control the levels of routing folders is to filter the mixer in the Avid Control app by track type, and to show only Folder tracks. As the filtering in the app mixer is independent of the mixer view in Pro Tools, the combination can be useful, especially if the filtering is combined with VCA and Master Faders.

The Tracks view is perhaps a more obvious place to control show/hides, however. The Tracks view has always offered access to Input, Record, Solo and Mute, and I find the Solo and Mute functions particularly useful when mixing, but the addition of an Open option makes this the perfect place to control folders, especially if you use the filtering to display only Folders. Folder tracks can be controlled en masse using modifiers and clicking either on the folder icons in the Edit or Mix windows or using the disclosure triangles in the Tracks sidebar (which is also visible in both the Edit and Mix windows). For example, Option-clicking toggles the open/closed state of all Folder tracks on the same level of the folder structure. Assuming you have Folders nested in other Folders, this becomes increasingly useful. These modifier-driven operations can be directly accessed from the Control Surface soft keys section — those 12 buttons which can be displayed at the bottom of the app in place of the transport controls, and which are mirrored on the Avid Dock by hardware buttons. Go to page 16 and you'll find open, close and toggle soft keys for individual, sibling and child Folders. If you have a Dock and Folders are important to your workflow, this is absolutely the way to go. 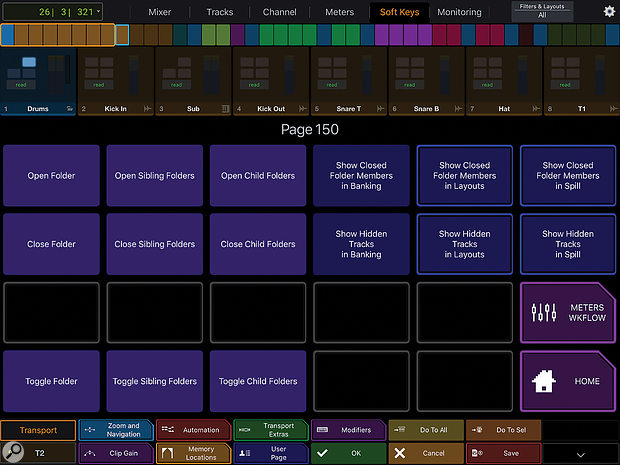 Page 150 of the EUCON app lets you determine how Folder tracks will appear on the app's mixer page or on a EUCON fader surface.

All the same buttons are available in the dedicated Soft Keys page of the app, along with worksurface-specific buttons controlling how closed Folders and hidden tracks present themselves in Banking, Layouts and Spill operations on a work surface. To find these buttons go to page 150. Of course, part of the beauty of EUCON is its combination of deep control and customisability, and if you want to make custom soft keys and arrange them on a custom page, you absolutely can do that. 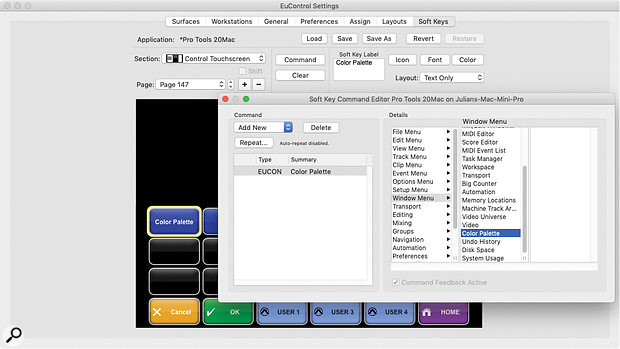 Pro Tools doesn't offer a keyboard shortcut to the Color Palette — but you can set up a custom soft key in EUCON in the EuControl settings window.

On another related note, it's always bothered me that there is no keyboard shortcut to open and close the Color Palette. However, being accessible from the menus, it's a perfect contender for a EUCON softkey. From Pro Tools, simply switch to EUCON and open EUCON Settings. Go to Soft Keys, select Control Touchscreen and, if you are experimenting, go to a free page. Page 147 is the first such page. Select a button, hit the Command button and go to 'Add new Eucon'. Select Window Menu / Color Pallette, and you're done.

This is a small first step and EUCON control can get much deeper, so if you haven't yet tried EUCON, get your tablet or even your smartphone and give it a go. Hardware surfaces are lovely but the integration of EUCON can be explored pretty much for free.