Q. What are my phase-correlation meters telling me? 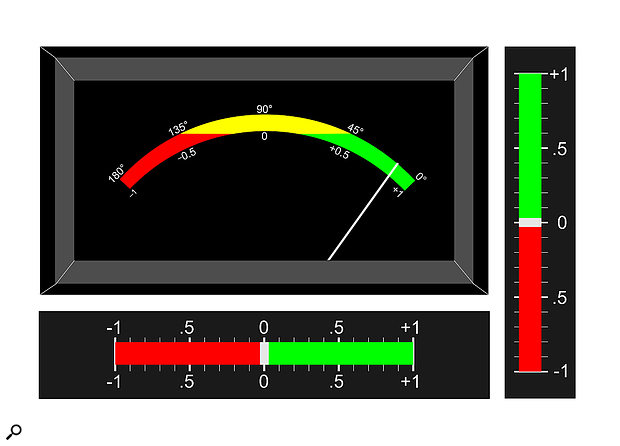 Impressions of a typical mechanical moving-coil phase-correlation meter, and a linear LED version (these are often orientated vertically). Both have been emulated in software metering plug-ins.

I recorded a choir with an ORTF pair and a 40cm-spaced omni pair on a bar, and later viewed these recordings on the Voxengo Span plug-in’s correlation meter. With the spaced omni channels panned hard left/right, the meter stayed predominantly around the centre ‘0’ mark, whereas when I panned the two channels to the centre it went solidly to the right-hand ‘+1’ mark. The ORTF pair, panned hard left/right, spent 90 percent of the time close to the right-hand ‘+1’ mark. I have read the Span manual but remain confused about what this meter is telling me. Can you guide me through what I am seeing and why please?

SOS Technical Editor Hugh Robjohns replies: The correlation meter has been around for many, many decades — it was an essential tool for cutting vinyl records, to ensure the stylus wouldn’t be thrown out of the groove by any strong out-of-phase components. But despite its age, it remains a common facility on high-end mixing consoles and in most metering plug-ins. Essentially, it displays the changing phase relationships between the left and right channels of a stereo signal, but in more simple terms, it can be thought of as indicating the state of a stereo signal’s mono compatibility.

The phase-correlation meter can be presented in many different physical and virtual forms, but the scale normally ranges from -1 at the left, through zero in the centre, and on to +1 at the right-hand side. Often the right half (from 0 to +1) is shaded green, while the left-half (from -1 to 0) is shaded red, and sometimes the linear versions of the meter are set vertically with the +1 end of the scale at the top. The meter’s integration time is usually fairly long, typically around 600 milliseconds, to ensure a relatively gentle and steady meter movement.

The meter is fed the left and right audio channels and displays the integrated phase correlation between them. If the two inputs are identical (a dual-mono signal) they are said to be ‘fully correlated’ and the meter indicates +1. This is not an arbitrary number; it comes from the mathematical cosine of an angle of zero degrees, because there are zero degrees of phase difference between the two channels in this example.

On the other hand, if the two signals are completely different (for example, with two different widely panned instruments, or from the outputs of a widely spaced stereo mic array), they are said to be ‘fully decorrelated’ and the stereo image will be as wide as it is possible to be. Typically, the average phase difference in this situation would be 90 degrees, and the cosine is therefore zero.

Finally, in the case of a dual-mono signal where one channel is polarity-inverted, the phase difference will be precisely 180-degrees, and as the cosine is -1 the meter will indicate at the negative extreme of the scale.

So in simple terms, a correlation meter reading of +1 means that it is receiving a (dual) mono signal, whereas a reading of zero means a fully wide stereo image. Normal stereo material will generally display a fluctuating reading between +1 and zero. If the reading trends towards the +1 end the image is getting narrower and heading towards mono, while trends towards zero indicate a much wider image.

Returning to your specific example, a recording made with spaced omnis will inherently have very little correlation between the two channels and hence a reading close to 0 in the middle of a standard correlation meter’s scale. By panning the two channels to the centre you created a dual-mono signal which is inherently fully-correlated, and hence a solid reading of +1 at the right-hand end (or top) of the meter.

An ORTF array will tend to produce a somewhat more correlated stereo image than widely spaced omnis (but less correlated than a typical X-Y array), so I would expect a more positive reading closer to the 1+ end of the scale. However, the very strongly positive reading that you mentioned indicates a general lack of stereo width, which suggests either that the microphone array was placed too far away from the source for its nominally 96-degree stereo acceptance angle, or the room acoustic was rather dry and lacking in ambient reverberation (or both).