Q. How should I mount a pair of AKG C414s? Skip to main content

I've been trying to use a pair of AKG C414s in a coincident X-Y mode, but am finding it physically difficult to mount the microphones. I've seen references to vertically aligned and horizontally aligned methods, but these terms imply different mounting arrangements to me. I've also heard reference to a Blumlein technique, but I thought that utilises figure‑of‑eight polar patterns, whereas I was planning on using cardioid in order to maintain focus. Can you clarify the correct technique for using X-Y with the 414s, please?

SOS Technical Editor Hugh Robjohns replies: Blumlein is a specific sub‑form of a coincident (often referred to as an X-Y) stereo microphone arrangement. Basically, X-Y is normally used to imply a stereo array with coincident capsules, whereas A-B normally means spaced microphones, although not everyone uses these terms in the same way. The physical angle between the two microphones in an X-Y array (the mutual angle) and their polar patterns is not defined in the umbrella X-Y term. More or less any mutual angle can be used, and any directional polar pattern, and it would still be an X-Y array. Blumlein is a very specific form of X-Y array. It uses coincident capsules with figure‑of‑eight polar patterns, and a 90‑degree mutual angle (although this is sometimes eased out to 80 degrees to alter the stereo imaging).

As for the correct X-Y mounting technique, there is only one arrangement for end‑fire small-diaphragm microphones, shown below in the first example. 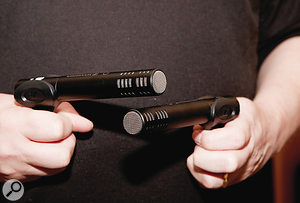 Example 1: This is really the only suitable XY-mounting technique for end-fire small-diaphragm microphones.However, as you have discovered, mounting side‑address large‑diaphragm microphones can often be a little more taxing and requires more versatile mounting hardware. Basically, the two microphone capsules have to be mounted such that they are coincident in the horizontal plane, and that means they have to be placed with one directly above the other. In this way, sound wave fronts from any source arrive at both capsules at the same time. Stereo imaging information is captured by the level differences imposed by the polar patterns and the fact that the mics are pointing in different directions; there are no timing differences between the left and right channels. So, ideally, the microphones should be mounted vertically with one above the other, as in the second example, 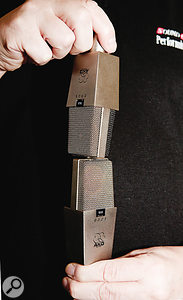 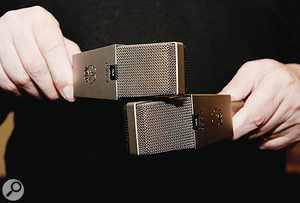 Example 3: Mics mounted horizontally with one above the other.Mounting the mics vertically one above the other generally requires either two stands or the creative use of some guitar clamps, although Microtech Gefell and AEA (among others) make suitable brackets for supporting mics vertically. Mounting the mics horizontally above one another can be achieved a little more easily with a wide stereo bar and some pillars or stacked thread adaptors to hold the mics clear of the bar.

An arrangement that's often used and is far more convenient, albeit with slightly less imaging accuracy, because the capsules are spaced slightly in the horizontal plane (and will therefore capture some small time‑of‑arrival differences, as well as the wanted level differences due to the polar pattern), can be seen in the fourth example. 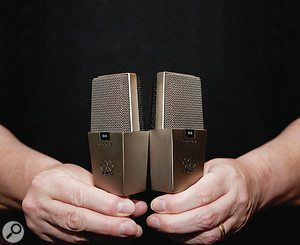 This format can be achieved with a short stereo bar very easily and, in practice, works very well. With a wider stereo bar to allow greater spacing between the mics, you can easily turn this into an ORTF stereo array (capsule spacing of 17cm with a 110‑degree mutual angle on cardioid patterns).

The one arrangement you should never use can be seen in the fifth example. 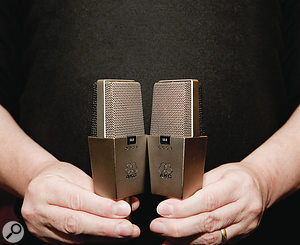 Example 5: This arrangement should never be used, as one microphone will acoustically 'shadow' the other. interfering with stereo imaging.The problem with this configuration is that each microphone sits directly in the active area of the polar pattern of the other mic, forming an acoustic shadow for high‑frequency sounds, which will mess up the imaging fairly comprehensively.