We've had some goodies from Apple recently, but now it gets serious: the updated Mac Pro is finally here! 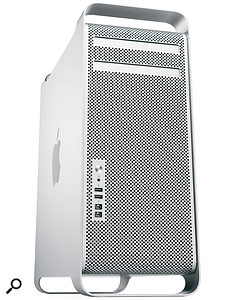 The mighty new Mac Pro comes with up to 12 processor cores in the latest Intel Xeon 'Westmere' processors, running at speeds of up to 3.33GHzPhoto: Apple

How about that? You wait ages for a hardware update, then several turn up at once! It's fair to say that the first of these was not entirely unexpected and, by previous standards, certainly overdue. The new Mac Pro has, as predicted, up to 12 processor cores employing the latest Intel Xeon 'Westmere' processors, running at speeds of up to 3.33GHz. These chips support dynamic speed boosting, so can temporarily maintain speeds of up to 3.6GHz, as well as Hyperthreading to give up to 24 virtual processing cores. As you might expect, the higher-spec chips come as a customer option, with the two 'base' machines being supplied with a single 2.8GHz quad‑core processor (Intel Xeon W3530 with 8MB of L3 cache), and a dual 2.4GHz quad‑core processor (Intel Xeon E5620 with 12MB of L3 cache per processor). The optional six‑core chips are either the 2.66GHz Intel Xeon X5650 or the 2.93GHz X5670.

The single‑processor model is supplied with 3GB RAM (upgradable to 16GB) and the dual machine with 6GB (upgradable to 32GB). Graphics duties in both the machines are handled by ATI's Radeon HD5770, which has 1GB of its own RAM. The faster ATI Radeon HD5870 is available to order.

Although it is possible to add third‑party solid‑state drives (SSDs) to the outgoing Mac Pro range, Apple are now offering this as an option for the first time with the new range. With all four bays filled, you could add up to 2TB of SSD performance. Of course, a combination of SSD and regular hard drive may be the best balance between performance and storage space. Some users have cast doubts on the suitability of SSD for all data‑intensive tasks, so it will be fascinating to determine how these new machines perform with respect to music applications. 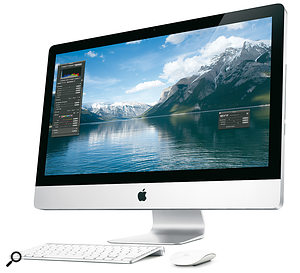 Like its bigger brother, the Mac Pro, the iMac can be supplied with a solid‑state drive, in this case being a built‑to‑order option in three of the four model options.

The iMac range has also received an update. Less widely rumoured, perhaps, but reasonably easy to predict if you've been keeping an eye on Intel's supply chain. Intel Core i3, i5 and i7 processors are now found in all models, and memory now runs at 1333MHz (one thing Apple won't tell you is that this is faster than the Mac Pro's 1066MHz!).

Solid‑state drives also make their first appearance as a build‑to‑order option for three of the four models in the range (the bottom‑of‑the‑range model misses out): 256GB of SSD can be specified to replace the original hard drive or, more interestingly, installed in addition, either as the primary or secondary drive. The former is where the operating system is installed on the SSD for ultra‑fast boot and application loading times, and data is kept on the larger standard drive where, perhaps, the blazing random‑access times of SSDs are less critical (certainly the case for video editors).

With dual‑core speeds topping out at 3.6GHz and the top‑of‑the‑range quad‑core at 2.93GHz (the only i7 processor in the range, available as a build‑to‑order option), the bang per buck contest between the low‑spec Mac Pro and the high‑spec iMac is still very much on. My projection (as I am writing this before the new Mac Pro is available) is that, as before, in many areas of everyday use, including low‑intensity music production, there is little to divide the two machines. It will only become apparent at the limits of performance that the extra bandwidth made available by the internal architecture of a Mac Pro, and the flexibility provided by its connectivity and configurability options, will still make it the machine of choice for music professionals.

If you haven't yet spent enough money, why not grab a new 27‑inch cinema display (replacing the previous 24‑inch model) for your MacBook or MacBook Pro? Combined with the Magic Trackpad (see box for more information), this would make a powerful argument for replacing your current desktop setup with something more flexible and portable, if the ultimate power and connectivity options of the Mac Pro are not prerequisites.

The Bluetooth‑enabled Magic Trackpad allows the kind of touchscreen, pinch‑and-swipe capabilities that are common on Apple's handheld products, and also the MacBook Pro.

Bluetooth always used to be an option on Apple's flagship desktop models, but now comes as standard, primarily to support the increasing range of Bluetooth‑enabled data input devices, the latest of which is the Magic Trackpad. Gimmicky name aside, this is an interesting development and might signpost the future development of both the hardware and operating system. It is essentially a larger version of the glass trackpad supplied with MacBook Pros, and supplies the same range of multi‑touch gestures, such as inertial scrolling, three‑finger swiping, pinch‑to‑zoom and rotation. The Magic Trackpad can be used with any Mac and takes advantage of the fact that such functionality is built into the OS and, therefore, common to all machines that run it.

There is currently a groundswell of opinion to suggest that Mac OS X might be about to undergo a rebranding exercise. Version 10 has been with us for 11 years (if you take the starting point as the release of OS X Server 10.0 in 1999), and the timing of evolutionary cycles in operating systems would suggest that we are due a step change soon. So, extending the iOS theme (the recent re‑branding of the iPhone OS), three versions might co‑exist: Mobile iOS, Desktop iOS and Server iOS. Well, it would certainly resolve the issue of finding another big cat to adopt. Taking this conjecture a step further could see the concept of app control and delivery, which has underscored the phenomenal success of Apple's handheld devices, to all Apple applications. It is notable that the current excitement surrounding apps for the iPhone, iPod Touch and iPad has brought a new energy to software development, and this would be beneficial to many traditional applications whose development has become somewhat stagnant of late (iLife 09 anyone?).

It's likely, then, that the features that have made Apple's mobile devices such a success, such as the ways in which we can physically interact with the device, will find their way onto the rest of the Mac range. The computer mouse is now 40 years old (the first patent was granted in 1970), and the QWERTY keyboard is based on a concept that is over a century old! The next revolution in computing might be something as simple as redefining the ways in which we physically interact with them. The days of point-and-click may be numbered as we pinch-and-swipe our way into the future...

What Do Mastering Engineers Actually Do?
23 hours 50 min ago.