Q. What's the difference between ported and un-ported monitors? 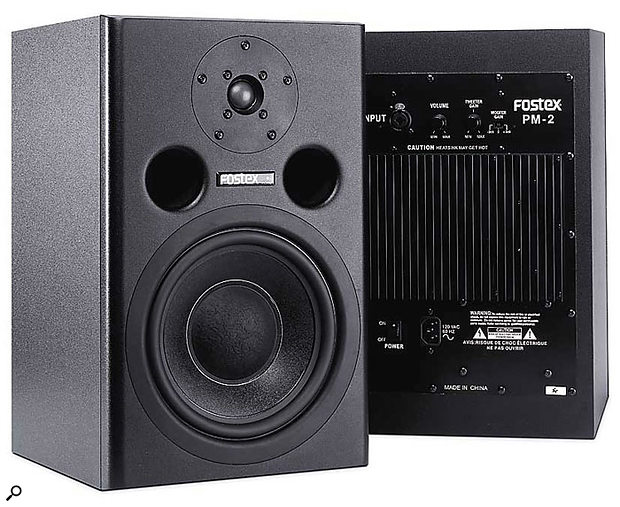 Reflex, or ported, monitors like the Fostex PM2 boost low frequencies at the expense of definition.

I'd like to know more about the difference between monitor designs that feature ports and those that do not. How do they differ in terms of sound and performance? Also, why is the term 'infinite baffle' used to refer to un-ported designs? Surely 'sealed cabinet' or 'enclosed speaker' is a more accurate description.

Technical Editor Hugh Robjohns replies: Strictly speaking, an infinite baffle is exactly that: a baffle panel of infinite size in all directions, so that the front of the loudspeaker drives sound into our world, while the rear of the speaker is loaded by an equally infinite volume of air behind it in someone else's world, and none of the rearward sound can ever reach the front.

This is obviously impossible to achieve in practice, and the simplest solution is to fold the edges of the baffle around to form an enclosed space. This kind of cabinet construction is often referred to as an infinite-baffle or IB design, but it is actually rather different at a technical level. One of the most significant aspects is that the volume of trapped air is obviously finite, and in smaller cabinets acts as an appreciable 'spring' against which the rear of the driver has to work. This affects the linearity of the system, as the driver has to work against different resistive loads when responding to input signals of each polarity, and at differing levels. So, yes, calling it a sealed cabinet would be more accurate and informative!

The most common form of loudspeaker cabinet is the reflex or ported design, with one or more holes in the cabinet — either on the front baffle (as with the Fostex PM2 above) or sometimes on the rear panel. The idea of the port is to make the cabinet resonate at a carefully chosen low frequency — not unlike the effect of blowing across the top of an empty bottle. The effect of the resonance is to bolster the low-frequency response, and thus generate a greater low-frequency output from a cabinet of a given size than is possible with an infinite-baffle — sorry, sealed cabinet — design.

There's no free lunch though. In an infinite-baffle cabinet the bass rolls off gently at 6dB-per-octave, which means that even small cabinets can produce an audible output at surprisingly low frequencies. The reflex design has a 12dB-per-octave slope, which means that although the upper end of the low-frequency region is louder than it is in an infinite-baffle cabinet of equivalent size, the lower end of the spectrum falls away much more quickly. This can give rise to the 'one note' bass effect — where the monitor's resonant frequency is emphasised at the expense of all others — which is common in many reflex designs. Another problem is that the port resonance causes 'time smearing' — its inherent 'ringing' at a low frequency when triggered by a transient signal can cloud low-level detail and give a false impression of the transient dynamics and balance of instruments.

There are several other less common variations on these cabinet themes. Some designs place a 'passive radiator' or diaphragm over the port, so that the cabinet is a compromise between a sealed enclosure and a vented design. The Mackie HR series monitors take this approach, for example. Another technique is the 'transmission line' favoured by PMC. This involves an altogether more complex and expensive cabinet design, and requires drivers with unusual characteristics, but it offers some significant advantages. These include a large reduction in low-frequency distortion, a more consistent balance at different listening levels, and a vastly improved low-frequency extension over equivalent-sized reflex or infinite baffle cabinets.