Q. What kind of reel-to-reel tape recorder do I need?

A friend of mine has a couple of old stereo tape reels which he'd like to transfer to CD. I've seen a number of stereo reel-to-reel tape machines for sale on eBay and I'm considering investing in one, probably a Studer or a Revox, not only to help out my friend, but also because I'm interested in experimenting with tape loops and tape saturation effects. Are old machines by these manufacturers reliable Unfortunately, he doesn't know the make of the reel-to-reel recorder the recordings were made on, or the tape speed at which they were recorded. Are all recorders and players compatible? What different tape speeds are there? Finally, if I want to try editing tape, what equipment do I need? 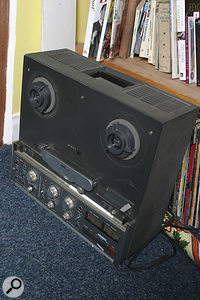 A Revox B77 stereo tape recorder, minus tape reels.Technical Editor Hugh Robjohns replies: Reel-to-reel tape comes in lots of different flavours, and there are even more recording formats. A lot depends on the age of the tapes you're dealing with, but, generally speaking, quarter-inch tape was the norm for domestic mono or stereo tape recorders, while professional mono, stereo and multitrack machines used quarter-inch, half-inch, one-inch or two-inch tape — and still do!

In the case of stereo recording, 'professional' machines are usually stereo 'half-track' recorders, meaning that the left channel occupies (almost) half the tape width, and the right channel the other half. Domestic machines tend to be 'quarter-tracks', recording two channels in one direction and two in the other when the tape was turned over, each track occupying slightly less than a quarter of the total tape width — hence the terminology. The same arrangement is used in compact cassette tapes. Clearly, a half-track machine won't be able to play quarter-track tapes, and vice versa, unless it is fitted with additional heads to accommodate the alternative format. A few recorder models offered this facility as an option.

Then there is the issue of tape speeds. The usual professional speeds for quarter-inch tape are 7.5 and 15 ips (inches per second). 30ips is rare on quarter-inch machines and tends to be used only on the bigger multitracks and half-inch mastering machines. The greater the width of tape you give to each track, and the faster the tape speed, the higher the quality of the recording in terms of the signal-to-noise ratio, although higher speeds also reduce the low-frequency extension of the recording slightly.

The typical tape speeds for domestic machines are 7.5 and 3.75 inches per second, although a lot of machines had the option of a slower speed of one and seven eighths (1.875ips) too. So a tape machine might have settings of 3.75 and 1.875 ips rather than 7.5 and 3.75 ips. Indeed, some tape recorders offer three speed options instead of just two. There is also an even slower speed, used by many radio stations for logging the broadcast output, of 15/16ths of an inch per second! So before you can buy a machine to replay these tapes you really need to find out more about them to make sure your machine has the right type of heads for the tape format, and the correct speed options.

There were lots of different tape recorder manufacturers in reel-to-reel tape's heyday, but the Studer machines, and their domesticated siblings, the Revox recorders, are perhaps the best known and most commonly available. The Revox B77 and the professional version of it, the PR99, are both widely available and have better electronics than the older A77, although this is still a reliable and good-sounding machine when set up well. Other variants include the A700, and older valve machines like the venerable G36.

Although Studer/Revox no longer make these tape machines, maintenance is still quite easy, parts are easy to get hold of, and there are plenty of specialist repair people around. Revoxes come in all the usual flavours with quarter- or half-track heads and standard (7.5/3.75) or high-speed (15/7.5) versions.

The Studer A807 was the last quarter-inch-format machine the company made, and the very last ex-factory stock was sold only a few weeks ago. I reckon the A807 is the best machine of its type that Studer ever made, both in terms of the audio electronics and the superb transport mechanism. Obviously, a lot of second-hand Studers have had a very hard life — particularly those that have come from broadcast environments — so be careful when buying. New heads and motors are available, but a bargain recorder can quickly become a very expensive toy if it needs a lot of tender loving care to get it to perform as well as it should. 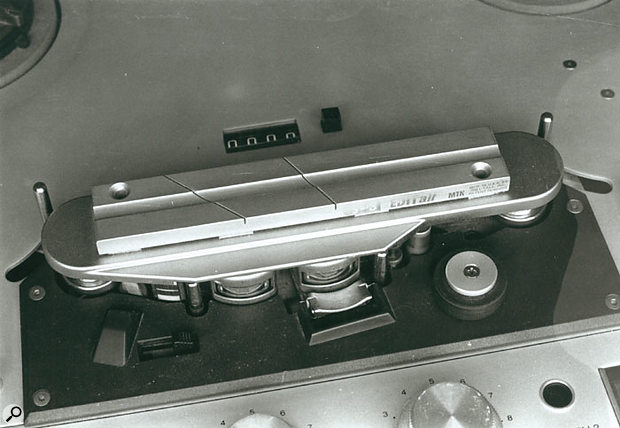 A cutting block for quarter-inch tape with 45- and 60-degree guide grooves.

As to your final question, for tape editing equipment, check out www.canford.co.uk or www.studiospares.com.

Standard editing blocks (also called tape splicing blocks) have the three splicing guide grooves set at 89 degrees, 60 degrees and 45 degrees to the central channel which holds the tape. The 89-degree guide is intended for editing out clicks and isn't normally used for music or speech editing. The 60-degree guide in the middle is the one to use for normal stereo editing work, but it is worth noting that the angled cut means that one channel will fade in fractionally before the other. This becomes more noticeable with the 45-degree slope. This provides the longest crossfade between outgoing and incoming audio segments and so tends to give the smoothest edits. But with stereo material the fact that one channel changes before the other can become very obviously audible with some types of material — something known as a 'flashing edit' because the sound appears to flash from one side of the stereo image to the other.

The basic technique for editing is to move the tape over the machine's replay head (usually the one at the right-hand side of the head block,) to find the 'in' point at which you want to edit, and mark the back of the tape carefully in line with the centre of the replay head using the chinagraph pencil.

Do the same for the other edit point (the 'out') then remove the tape from the machine's heads and tape guides. Place it into the channel of the splicing block, magnetic recording side down, aligning the first chinagraph mark with the middle of the three cutting guides (the 60 degree guide). To save time, you can overlay the second edit point (so that a single swipe of the blade will cut both bits of tape in the right places), or you can cut them one at a time — whichever you prefer.

Having cut the tapes, remove the unwanted section and ensure the remaining tape is aligned neatly at the new edit. Don't throw the removed tape away yet — you may need to splice it back in if the edit doesn't work!

Next, cut off about three-quarters of an inch of splicing tape. I like to stick the end to the edge of the razor blade to move it around as this avoids contaminating the tape with finger grease and makes it easier to align with the splicing block.

If the edit doesn't work for some reason, it is possible to carefully peel off the splicing tape and have another attempt if necessary — just as well you didn't throw that unwanted bit of tape away too soon!