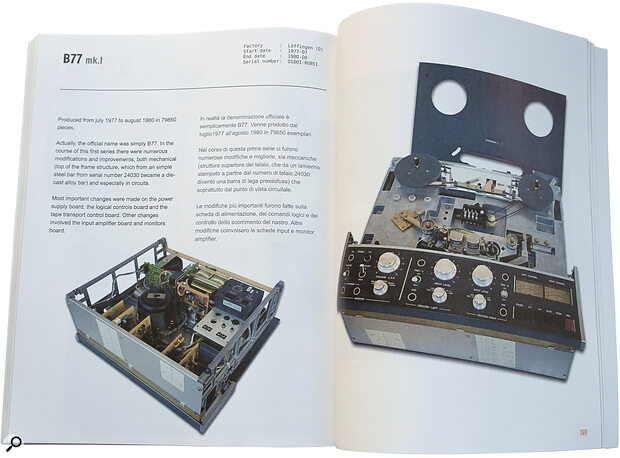 This book’s Italian authors, Luca Maria Olgiati and Paolo Bologna — both very knowledgeable Revox enthusiasts — have created a unique and detailed history of the entire line of Revox tape recorders. Originally published privately in 2016 in hardback form, in 2021 it was made available as a large‑format paperback (10 x 8 inches, 240 pages, ISBN: 978‑1‑36‑659060‑2), and although its niche market means, inevitably, that it is expensive, it is unquestionably a ‘must have’ volume for every serious tape recorder disciple! 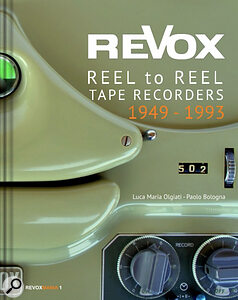 Officially approved by Revox, the company’s entire tape recorder portfolio is described through 34 short chapters, each dedicated to a different model ranging from the original 1949 Dynavox T26, through the entire 36‑series range, the famous A77s (in all its variants including the little‑known A88!), and on through the B77s and PR99s, to the final C27x‑series models which rolled off the production line in 1993.

Every chapter is illustrated gloriously with abundant good‑quality bespoke colour photos showing various aspects of the machines being discussed, along with details of the internal mechanical construction and circuit boards. Most of these images are of the authors’ own collection of Revox machines.

There’s a great deal of fascinating historical and technical information here, with the text presented in two columns for the original Italian and translated English. Disappointingly, the translation appears to be courtesy of Google Translate with some hilarious and frustrating results — although most of it can be deciphered without too much trouble. By way of a typical example, here’s a quote about the B77: “Produced in fast half a million units during 10 years, it proved to have a proverbial quality and reliability, so most of the main components, which on the field demonstrated to have been designed and built in an excellent way, remained the same: motors, heads, solenoids, and especially the audio circuitry, who was a masterpiece of Guido Besimo design.”

Regardless of the un‑English English, though, this really is a magnificently thorough account of the world’s most famous tape recorder manufacturer’s consumer creations, and it’s a genuine delight just to dip into and pore over the photographs when needing a nostalgic fix! A very enjoyable read. 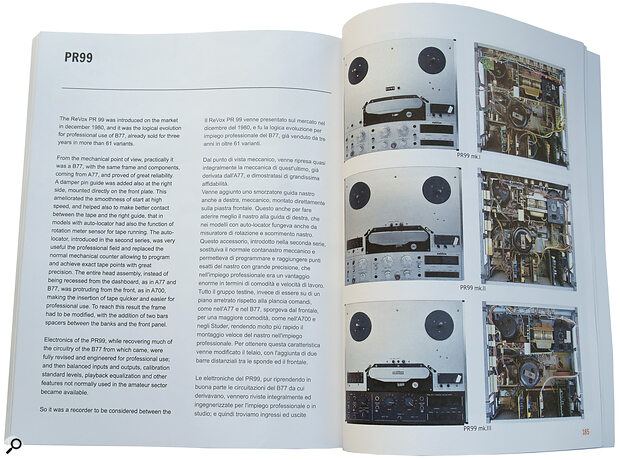 Large paperback format, as reviewed, £108.65. Other versions available from around £60.