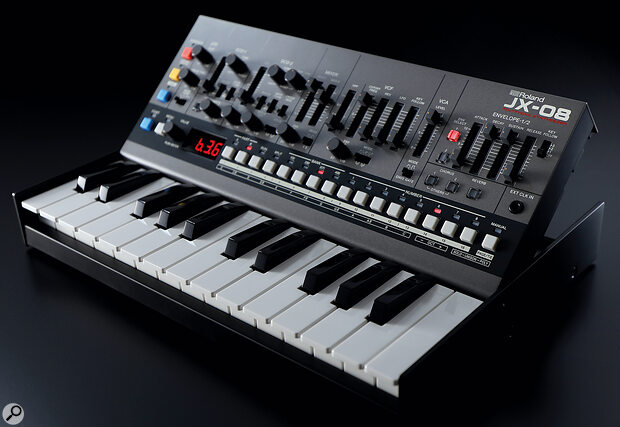 Roland add another classic polysynth to their Boutique range.

The JX‑08 is the second of Roland’s latest Boutique modules, and is based upon the sound engine of two of the most significant polysynths in my life. These are the Roland JX‑8P and the Super JX‑10, the latter of which is, essentially, two JX‑8Ps frolicking in an enhanced bi‑timbral architecture. How significant? Well, between 1984 and 1987, I discarded an impressive but unwieldy pre‑MIDI keyboard rig in favour of one of each, replacing an RMI Electrapiano, a Logan String Melody II, an Odyssey, a ProSoloist, an MS20 and other classics with just these two polysynths. Sure, the nature of the music that I was playing had changed, but this illustrates how flexible and pleasing I found — and still find — the JX architecture and sound to be. Consequently, I had high hopes for the JX‑08.

Like some previous Boutique modules, the JX‑08 panel gives the impression of being similar to its inspiration while being nothing like it. I placed it next to my Super JX‑10’s PG‑800 programmer and it took no time at all to spot numerous differences — fewer controls, knobs where before there were sliders, common controls for the VCF and VCA contours, a smooth fader for the high‑pass filter rather than four preset positions, no physical controls for dynamics, and more.

Internally they’re very different too; the original instruments were DCO‑based analogue polysynths while the JX‑08 has a heart of pure zeroes and ones. The earliest Boutique modules used a technology that Roland call ACB, and this can be used to build highly accurate models of the synths that it emulates. However, it’s processor‑hungry, and this limited the Boutique versions of the Juno‑60/106, Jupiter‑8 and JX‑3P to just four voices. In contrast, the technology used for the JX‑08 appears to be a newer system that Roland calls ABM. This offers greater polyphony for a given processing bandwidth so, while it may not capture every nuance, there’s a strong argument for using it when emulating synths that require more voices.

I set the JX‑08 up alongside my Super JX‑10 and began my tests by comparing their oscillators against one another. This went well and, despite one synth being nearly 40 years old and the other being barely 40 days old, the two exhibited much the same character across all waveforms. Things started to diverge when I turned to the cross‑modulation options that play such an important part in the sound of the JX‑8P and Super JX‑10. On the originals, this has three settings: sync, sync plus x‑mod, and x‑mod, but the JX‑08 has only two. This is the architecture used by the JX‑8P emulation on the Jupiter‑X and Xm as well as the Zenology JX‑8P Model Expansion, reinforcing my view that the JX‑08 is a Zen technology synth rather than a dedicated emulation of the original.

I moved on to the filters, and soon came to the same conclusion. I created a filter sweep on each synth and passed various waves through it at various levels of resonance. The differences were quite audible, so I went hunting for a reason. This was when I discovered the JX‑08’s ‘F.typ’ parameter, which allows you to select from three options for the low‑pass filter. The sparse documentation tells you that this (and I quote) “Sets the change characteristics, modeled after an classic analog synthesizer LPF (low‑pass filter)”. I remembered this architecture from when I reviewed the Jupiter‑X and Xm (which each offer three filters named R, M and S) and the same three options are again found on the Zenology version of the JX‑8P. So if — as seems likely — filter 1 on the JX‑08 is the same as filter R on the Jupiter‑X, I’m not surprised that its response is different from that of the original.

At this point, I gave up on a feature‑by‑feature comparison because it seemed clear that the JX‑08’s synth engine is a Zen technology approximation rather than a specific ACB emulation. I have no problem with this, but Roland’s marketing department does the company no favours when it writes that the JX‑08 is an “authentic recreation of the Roland JX‑8P synthesizer”, which clearly isn’t true.

Nonetheless, there’s much to like about the JX‑08. For example, it’s bi‑timbral. Unlike the JD‑08, where the provision of two Parts was a considerable shortcoming when compared with the original, the two Parts in the JX‑08 elevate it from approximating the JX‑8P to approximating the Super JX‑10 that was, in many ways, Roland’s greatest analogue polysynth. Sure, the Jupiter‑8 is in many people’s minds unassailable in that regard, but it had lesser polyphony, was neither velocity‑ nor aftertouch‑sensitive, and it lacked many of the sound‑design capabilities of the largest JX. Anyway... the two Parts in the JX‑08 can be split or layered across the keyboard and can be used to create some of the lushest pads you’ve ever heard as well as complex sounds that would be impossible to obtain using a single Part.

The JX‑08 also benefits from increased polyphony. Although Roland were initially reluctant to say what this is, it turns out to be 20 voices, which means that you can play up to 20 keys when using a single Part or the two Parts in split mode, and up to 10 keys in dual mode. I regularly ran out of notes...