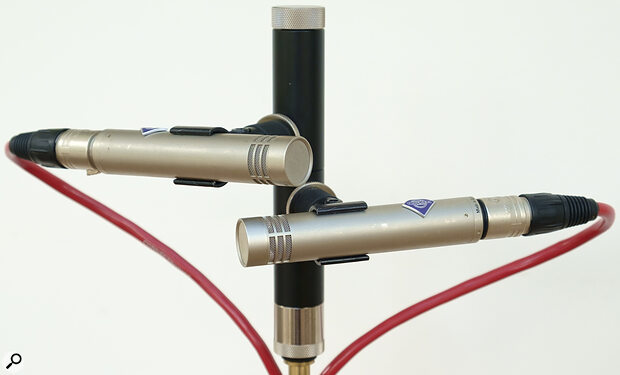 I’m always on the lookout for neat solutions to mount stereo microphone arrays quickly and accurately. Many stereo arrays require the mics to cross over one another, and that can be tricky with conventional flat stereo bars, making it necessary to raise one mic using a stack of thread adapters, or to invert one mount to suspend a mic below the bar. However, Shure offer a very neat lateral‑thinking solution to this problem in their unmemorably named A27M.

Introduced way back in September 1980 (at the princely sum of £15for something like $15‑20) this stereo mic adapter has been working reliably in the pro‑audio industry as long as I have! Bewilderingly, though, I’ve never used one until recently, and 40 years of inflation means it now costs a shade over £60under $80. But its fine engineering and all‑metal construction mean that it will easily last a lifetime, so it’s a solid investment nonetheless! 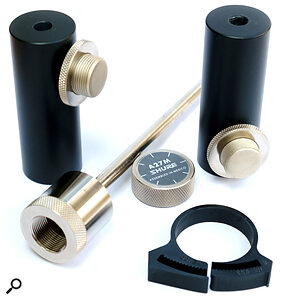 This pleasingly versatile mount comprises a 25mm (1 inch) diameter column roughly 170mm (6.5 inches) tall, weighing a reassuringly heavy 390g (0.8lbs), and divided into four pieces. The base contains a 5/8‑inch threaded socket to attach to a mic stand, and a 1/4‑inch diameter shaft extends almost the full height of the assembled unit terminating with a short, threaded section. Two black cylinders with drilled centres slide over this shaft, each with a 5/8‑inch threaded stud (and locking ring) sticking out at right‑angles near one end. These cylinders can obviously be rotated so the threaded studs can face out at any desired angle. A knurled cap screws into the top of the shaft, clamping everything firmly in position. A label on the top indicates 45 degrees with increments to aid mic positioning, and a removable, adjustable plastic clip is also included to help secure mic cables neatly against the column, if desired.

Since the mic‑mounting studs are located towards the ends of their cylinders, the distance between them can be altered simply by inverting one, or both, on the shaft. So, with the two studs positioned near the middle of the column their separation is 32mm (1 1/4 inches), which is ideal for typical small‑diaphragm ‘pencil’ mics. With one tube inverted, the spacing increases to 67mm (2 5/8‑inches), and with the studs at opposite ends they are 102mm (4 inches) apart, which allows large‑diaphragm mics to be used too, all without mechanically conflicting with one another.

A wide variety of coincident, near‑coincident, and near‑spaced stereo arrays can be configured and adjusted remarkably quickly.

By adjusting the relative angles of the two mounting studs, a wide variety of coincident, near‑coincident and near‑spaced stereo arrays can be configured and adjusted remarkably quickly and easily, and the mount can accommodate mics of different diameters and lengths with far greater convenience than most conventional stereo bars, too. In some situations, I’d argue that it looks neater as well.

I’ve no idea why I took 42 years to acquire the A27M stereo mic mount; it’s so ingenious, so practical, and so elegant that I really wish I’d had it earlier. Highly recommended!