Q. What’s the best way to hook up my hardware to my DAW?

I’m hoping you can help me use my hardware with my computer! I’ve acquired a few instruments (synths, drum machines and so on) and some outboard gear too (some old Aphex, Dbx and Drawmer compressors, a TL Audio EQ, and some Alesis and Yamaha reverbs, and I’ve also got a load of guitar effects pedals). My current setup is based around a Samsung laptop running a copy of Reaper, and a Focusrite Saffire Pro 40 interface. Ideally, I’d like to be able to use all of these bits of gear whenever I want, without having to keep plugging in and unplugging all the cables. What’s the best way to do this?

Reviews Editor Matt Houghton replies: I explained a lot of this more generally in an article about ‘hybrid studios’ back in SOS May 2010 (http://sosm.ag/hybrid-systems), and it’s well worth reading that if you want some general pointers. But let’s look at your setup more specifically — and the first thing to say is that it sounds like you’ve got more gear than your interface can cope with simultaneously. This means that you’re either going to need to invest in some gear that gives you more inputs and outputs, or you need to put up with plugging and unplugging things.

There are a few different ways to tackle this. If ease of routing is your main concern but you don’t need to use all these synths, processors and effects at once, then the traditional approach is to use a patchbay: you hook up your interface’s I/O and all your gear’s I/O to the patchbay, and use patch cables to route one item to another. Obviously you’re still plugging and unplugging, but it’s a lot easier than having to plug and unplug cables from the back of all your gear, particularly if it’s rackmounted and awkward to get behind the rack! Hugh Robjohns wrote a useful piece detailing ways to organise your patch bay in SOS December 1999 (http://sosm.ag/patchbays). 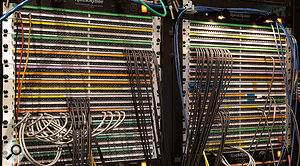 The humble patchbay has been taking the hassle out of hardware routing for decades, and remains the most effective way of connecting an abundance of hardware to the limited I/O of your audio interface.If you need to be able to access all of your gear from your DAW at the same time, though, you’ll either need a new interface or to expand your Pro 40’s analogue I/O count via its ADAT (and possibly S/PDIF) digital I/O courtesy of some external A-D/D-A converter boxes. It’s possible in this way to add another 10 analogue I/O in total, but note that you’ll be limited to operating at 44.1 or 48 kHz if you do so — that’s a limitation of using eight ADAT channels over one optical connection. For example, you might add a Behringer ADA8200 via ADAT to give you another eight I/O, and you might have a reverb box that can be hooked directly up to the interface’s S/PDIF I/O (I used to hook up a TC Electronic M300 in this way — that and its replacement, the M350, are excellent little boxes for the money!).

You also have the option of investing in a new interface altogether, and there are plenty that offer more analogue I/O or are more expandable. It’s just a question of budget, really. If you do so, note that your Saffire Pro 40 can be operated in ‘stand-alone mode’ (details can be found on the Focusrite web site). This means that you could purchase an interface with dual ADAT ports — such as the Liquid Saffire 56, for example — use your current interface as an ADAT expander to give you eight extra channels, and buy another one, like the Behringer unit mentioned above, to give you 24 and 26 analogue inputs and outputs respectively — and the ability to add two more of each via S/PDIF. An alternative would be to buy an interface that offers lots of I/O in one box.

It struck me, though, that you’re less likely in some scenarios to need to access all of your synths simultaneously than you are your processors, simply because you can record their outputs as audio. So you might find that hooking up a small mixer to your interface to manage your recording inputs frees up enough I/O to accommodate most of your processors without having to expand things to the extent described above.

The other problem you raise is that you wish to hook up guitar effects to your interface, and this raises the issues of signal level and impedance. Most guitar effects pedals are designed to work with guitar-level signals, whereas your interface is designed to operate for the most part with mic and line-level signals. There are two inputs that offer high-impedance instrument inputs which are suitable for DI’ing your guitar, but no outputs suitable for re-amping. This may or may not be a problem — it depends what you’re trying to do. The ‘full fat’ solution is to use a re-amp box, which takes the line-level output for your interface and converts it to the level and impedance that your amp and effects expect to see. Yet, while that’s pretty much a necessity for routing things to a guitar amp, it’s often less so for pedals, simply because you’re more than likely wanting to use them to ‘dirty things up’ a bit, rather than to perform exactly as they would when using them with a guitar. If that’s the case, as long as you can supply them with a signal at a suitable level and they sound how you’d like them to sound, then you’re good to go. I’ve used one side of an interface’s headphone output for this in the past, simply because it has a handy volume control and sends an unbalanced signal out to the unbalanced effects pedal. Coming up with a system whereby you don’t have to keep re-patching your guitar effects is going to be tricky, though, and if it’s a permanent studio setup, then it might be worthwhile setting up a dedicated unbalanced patchbay for them. But if you’re wanting to take them out for live use, I’d prefer to patch them in as and when needed — it’s not so inconvenient as reaching around the back of the rack.