We answer some commonly-asked questions on the use of voice channels in recording.

Voice channels are signal-processing boxes that combine mic and line preamplifiers with facilities such as EQ, compression, limiting and enhancement. However, not all models offer all the above features and, in addition, the preamp section may or may not include an instrument-level input with a high input impedance, suitable for use with electric guitars and basses. The popularity of voice channels is linked to the increased use of desktop computer-based music systems, many of which do away with the need for a traditional recording mixer. They're also useful in a more traditional recording environment where the operator works mainly by overdubbing single parts and where quality requirements dictate the use of a preamp section better than that provided in the mixing console.

Q. Modern mixers tend to have very high-quality signal paths, so what's to be gained from using a voice channel?

Even a well-designed mixer has a fairly long and convoluted signal path, whereas a voice channel can be plugged directly into the input of the recorder, providing a much simpler and cleaner path. It's also the case that as a voice channel has only one preamp section, this is often more sophisticated than those you'd expect to find in a project studio mixer: it may, for example, have a much wider audio bandwidth, better noise performance, lower distortion and more headroom. Some models also feature valve or tube stages to add a little flattering tonal coloration to the sound.

There's less likelihood of introducing crosstalk or ground-loop hum when you have only a single voice channel patched into your recorder, especially if the recorder has balanced inputs, and because a voice channel includes other processing sections, it makes it possible to treat a signal prior to recording, if appropriate.

Q. In what situations is it best to add processing as you record?

Much depends on the type of recording system you have. In a traditional studio based around an analogue mixer and analogue tape machine, it is generally safest to record the signal completely flat or with just a small amount of compression. The reason is that if you do compress and equalise a signal while recording, then find it doesn't fit well with the rest of the mix, making the desired changes will be more difficult than if you started out with an unmodified signal.

In a digital recording situation where you are still using a normal mixer, the previous advice still applies, though if your voice channel has a separate limiter, you may want to use this to ensure that the recorder can never be overloaded by unexpected signal peaks. Few limiters are completely transparent in operation, but they all sound a lot better than digital clipping. Should your voice channel have a variable-ratio compressor but no limiter, you may be able to emulate limiting by setting the compressor to its highest ratio, then adjusting the threshold so that compression occurs just before digital full scale on the recorder's meters. You'll need to use the fastest attack time combined with a release time of around 200mS. Some compressor designs, particularly those based around optical devices, will however be too slow to catch transient peaks even using the fastest available attack time, so a separate limiter may prove necessary.

When working with a PC-based studio, the question of whether to process or not is a little more complex, because your system may only have stereo outputs, or it may have multiple outputs connected to a digital or analogue mixer. You may also have software plug-ins capable of high-quality compression, limiting, EQ, gating and so on.

As a rule, the processing available within an analogue voice channel is better than that provided by most low-cost plug-ins, though some of the more serious plug-ins are exceptionally good. For systems with stereo outputs, you won't have the chance to add any more analogue processing after recording, so the best bet is to process as you record. Even so, I find it's safest to use slightly less compression and EQ than you think you might ultimately need if you have plug-ins that can handle these tasks, as you can always call upon your plug-ins for fine-tuning when you come to mix. The comments about limiting also apply, so if your unit has a separate limiter, use it to prevent overloads. Similarly, if you don't need traditional compression when recording and you don't have a separate limiter, then use the compressor as a limiter as described earlier.

If your system has separate outputs feeding a conventional mixer, you can save your processing until the mixing stage, just as you might in a tape-based studio.

A few voice channels provide enhancement as an option; normally I'd only use an enhancer when mixing, but if you're working with a mic that has a poor high-end response, a gentle degree of enhancement can help produce a clearer recording.

Q. How can I use a voice channel when mixing?

The voice channel's input gain control should enable you to optimise the input level, and most output stages have enough gain and headroom to bring the signal back up to the required level, but just occasionally you may find that the output limiter in your voice channel comes in at too low a level if you work this way. Should this be the case, or if you are getting distortion because of a level mismatch, make up balanced-to-unbalanced cables and use the voice channel's balanced connectors. How you do this depends on the equipment in question — some require the cold output pin (usually pin 3 of the XLR) to be grounded while others need it to be left open-circuit. It's always safe to ground the cold leg of an input XLR providing it isn't a mic input with the phantom power switched on! Check your equipment handbook to find out which situation applies to you, and if the information isn't there, contact the manufacturer or distributor for the correct details.

Q. Are there any special gain structure considerations when using a voice channel?

When recording via a voice channel, you should always set the input gain trim so that the meters show a healthy reading. In most cases, this means that signal peaks will push the meter close to the top of its scale, but not far enough to cause the peak or clip indicator to come on. If there's an output meter that comes after the output level control, ensure that this is also producing a sensible reading. If you're recording directly from the voice channel, then you may have to use the output level control to set the record level, so be aware that digital equipment often requires much higher signal levels than analogue. In practice, many voice channels need to run with their output sections almost flat out to get enough level into the digital recorder. This is fine providing the voice channel has enough headroom and that no clip indicators light up.

A final point concerning gain structure is to take care how you use the compressor make-up gain control. This is provided so that you can compensate for any gain loss caused by compression, and perhaps the best way to adjust it is to use the compressor bypass switch to compare the maximum output meter readings (or your recorder's input meter if your voice channel has no output metering) with compression switched in and out. The peak signal levels should be similar both with and without compression, though the average level will be higher with compression. Adjust the compressor make-up gain until this is the case.

Q. Can I record a guitar or bass directly via a voice channel?

A: You can record an active guitar or bass (those that require batteries) via any device that has a line input with enough gain. However, ordinary passive guitars and basses need to run into an input impedance of 500k(omega) or ideally much higher. Some voice-channel manufacturers include an instrument input for this application, in which case you can plug straight into it. If you don't have an instrument input, you can still use the line input via a suitable high-impedance DI box.

Don't expect the sound you get from a voice channel to be exactly the same as you'd get from a guitar amp — guitar amps have tailored frequency response curves to give them their characteristic sound, so you may need to use some EQ to get the sound just the way you want it. You can use compression to fatten up and even out both guitar and bass sounds, but be aware that using overdrive pedals while DI'ing is likely to produce a rather edgy sound because a voice channel doesn't have the low-pass filtering characteristics of a typical guitar speaker cab to smooth it out. You could of course use an amp simulator after the voice channel.

Q. Is it possible to use a voice channel in conjunction with a mixer without making the signal path even longer?

Q. I do all my recording and mixing on my computer. Will buying a voice channel allow me to do without a hardware mixer?

A voice channel will certainly allow you to get mic and instrument signals into your computer with decent sound quality, provided of course you have a reasonable soundcard. Even if you are using a voice channel for all your preamplification and processing, however, it may still be useful to have a mixer in your computer recording setup. If you have external MIDI sound sources, you will need some way of monitoring these in conjunction with the outputs from your computer, which will make at least a small mixer necessary.

Even if you don't use external MIDI sound sources, using a monitor mixer may help with latency when recording. Unless you have a 'zero-latency' soundcard, or one with very well-written drivers, you are likely to suffer a delay between putting a signal into your computer via the soundcard, and hearing the processed signal as it emerges from the computer again. This delay or 'latency' can make recording overdubs extremely difficult. 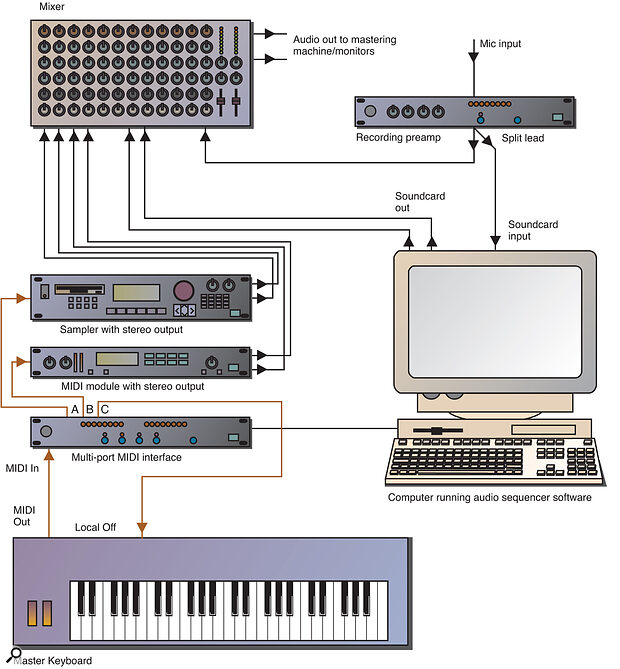 Using a mixer for monitoring to avoid latency.

One way around this (see diagram) is to split the signal into two components, one of which goes to the computer's soundcard and is muted on its output, while the other goes directly to your monitor mixer. That way, you can record overdubs while monitoring without any delay — the only fly in the ointment being that if you are using any plug-in effects or processes on your input signal, you will only be able to hear it 'dry' while you record. Many voice channels offer dual outputs, which make them ideal for use in this configuration: if yours doesn't, you could make up a Y lead that splits the output signal into two.

For more about avoiding latency in a computer-based setup, see SOS August 1999.

Q. Should I consider a voice channel with a digital output?

The obvious answer here is that you can only make use of a digital output if your recorder has a compatible digital input! The A-D converters in a good voice channel may well be better than those in a cheap recorder or soundcard. If your recorder or soundcard has indifferent A-D converters, but sports a digital audio input, then it may well be worth using the digital input and having your audio converted by a higher-spec A-D in your voice channel.

Q. Is there any practical difference between using a single stereo voice channel and two separate mono channels?

For stereo sources, you can just treat two separate voice channels, or the two channels of a dual-channel model, like separate mixer channels. However, some two-channel models allow the compressors to be linked for true-stereo operation, which keeps the stereo image more stable.