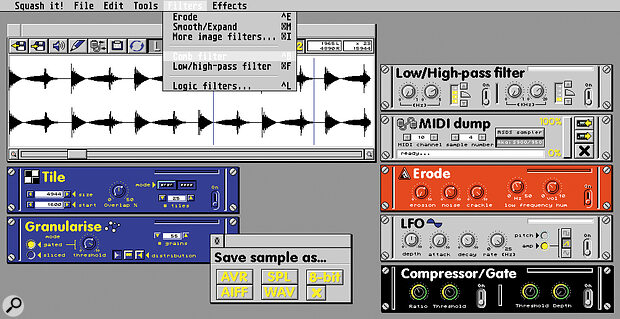 Electronic Cow's Squash It! is the latest, and perhaps the most unusual, sample‑editing software for the Atari.

Almost three years after he took over this column, Derek Johnson takes an opportunity to look back at some of the excellent music and audio software covered in over 30 instalments of Atari Notes.

It appears that this will be my 34th Atari Notes column since taking it over from the previous columnist, and I must admit to being pleased and surprised that there's been enough Atari news and products to allow me to keep writing the column so easily for so long. Not bad for what, by the computer‑age norm, should be an ex‑platform. Just as encouraging are the facts that the Atari is still a widespread music computer, that 32 percent of SOS readers have an Atari ST or Falcon of some kind (according to the recent reader survey), and that new software and hardware continues to be released and supported for the platform. And as for the underground activity in powerful TOS clones and accelerators, the mind boggles.

So let's take this opportunity to have a look at some of the software that's been covered in those 33 columns.

On The Right Track: Sequencing

The majority of readers with Ataris in their studio will be using their ancient machine for one thing: MIDI sequencing. Many established users swear by the computer's rock‑solid MIDI timing, and newcomers find that there's nothing to beat the ST for price. A second‑hand machine, with monitor, can be ludicrously cheap (even with a service, if needed), and the built‑in MIDI ports means it's possible to start working as soon as you've chosen some software. It's a well‑known but unsavoury fact that many of those ST owners will start off by using a pirated copy of a popular commercial sequencing package, but for those with a conscience there are alternatives. The last versions of Steinberg's Cubase can still be purchased legitimately; v3.01 of the standard MIDI sequencer is stocked by Keychange Music Services (+44 (0)1925 266120), and the MIDI + Audio version for Falcons and clones, Cubase Audio Falcon v2.06, can be bought from Core Design (+44 (0)121 693 6669) or System Solutions (+44 (0)1753 832212). Cubase on the Atari has much of the look and feel of the Mac and PC versions, with complete file compatibility so that if you take files into a Mac‑ or PC‑based studio, your work will load into whatever version is being run. If the 16 MIDI channels capable of being recorded and played by a basic ST isn't enough for you, adding an extra MIDI output is simplicity itself — the most basic plug into the modem connection — and several triple‑MIDI‑Out boxes are available, the latter option providing a total of 64 independent MIDI channels. Cubase is one of a handful of Atari MIDI sequencers that can take advantage of this number; C‑Lab's Creator/Notator pair did the same trick, but the software would only be available second‑hand these days.

Surprisingly, there are still one or two TOS‑based sequencers that are currently being developed, particularly for the Falcon. Competition for Cubase Audio comes in the shape of French company Softjee's Digital Home Studio, which offers up to 12 audio and 32 MIDI tracks. Each audio track has level, pan and effect parameters, and audio can be recorded direct to disk, so RAM limitations won't always be a problem. Treat the software as a virtual sampler if you like — an auto loop function is available — or process your audio with with the onboard effects (echo, reverb, flanger, equaliser and so on). Digital Home Studio is also available from Core Design

As is often mentioned in this column, public domain libraries and the Internet are a great source of free or shareware software — in the latter instance, you pay a fee to the software's author if you like and use the software concerned. Alchimie Jr and Henry Cosh's Accompanist 16‑track sequencer were two fairly early entries to the public domain, and they remain worthy of the attention of the cash‑strapped. But for sheer usability you can't beat Hollis Research's Trackman II. With a potential 32 independent MIDI tracks (if a modem MIDI expander is fitted), basic MIDI mixing, and a funky pattern‑based interface, this personal favourite was a commercial program for years, and a year or so ago was released as freeware. Support? None. Manuals? Not really. But it's so easy, and stable, that neither are 100 percent necessary. I still use Trackman II a lot for basic sequencing and song construction. Unfortunately for non‑Internet users, it's now only available from www.hollis.co.uk/john/trackman.html.

Another good bet is Roni Music's Sweet 16. This was also previously commercial software, and is now shareware (though Hands On MIDI Software can sell you a full copy by mail order). Sweet 16 is a pattern‑based sequencer with a user interface somewhat similar to C‑Lab's Creator (a predecessor of Emagic's Logic family). Good features include support for 32 MIDI channels (with a modem MIDI adaptor), and independent track lengths. Visit Roni at home1.swipnet.se/~w‑11396, or dial +44 (0)1705 783100 to talk to Hands On.

Many people with a spare Atari use it to run synth editor/librarians alongside more powerful computers. There have been generic editors for Ataris in the past, but finding support for modern instruments may be tricky if you can't create your own profiles. Hollis Midiman is worthy of note — it's free, and runs as a desk accessory, working particularly well with Trackman II. It doesn't offer librarian facilities, but provides live, on‑line parameter editing for attached synths, with tweaks saved as part of a Trackman II sequence.

As mentioned in recent articles, Yamaha 4‑op synths, Kawai's K1 and Casio's CZ‑family have been best served with editor/librarians, randomisers and PD patch collections. YSEditor Plus v2.64 (from www.telebyte.nl/~mt/yseditor.htm, or any PD library) remains the 4‑op editor/librarian to beat. It's postcardware — send the author a postcard if you use the software — and all varieties of 4‑op synth are supported. The software is mature and stable, easy to use, and can read patch files in virtually any format; it's great for moving sounds between the various 4‑op synths. For the K1 (and 'm' and 'r' variants), Joost Overmars' Bankmanager and Editor (I have v2.2, dated 1990!) is hard to beat. It allows you to load one complete bank of patches and multis, with just about enough room to create new custom banks, and an easy‑to‑grasp editing window. Jan Melander's K1Ed is even older, but lacks a multi editor. For CZ synths, there's the CZ Phonix editor/librarian, plus a number of random voice generators and straight librarians — in fact a disk in FaST CLubs PD library collects several together on one disk (see 'The FaST Show' box for details).

Current synths may not be served well by ST editors, but other older MIDI devices to get the treatment include Yamaha's DX7 and TG100, Roland's D110 (and other Linear Arithmetic synths of a similar vintage), Korg's M1/M1R, and Casio's VZ family. Search the public domain to find what you require; if I haven't owned the synth, I've never acquired the relevant software, so you're on your own! Try your favourite PD library, or Shareware Music Machine (www.hitsquad.com/smm/atari/) or the Music Machines software area (machines.hyperreal.org/categories/software/Atari‑ST/).

So that's sequencing and voice editing; now what about sample editing? There remain two commercial choices: Copson Data's Zero X (which has recently been ported to the PC), and Electronic Cow's Squash It, both of which offer interesting sound‑design tools.

Zero X is a particularly well‑specified package, and is well‑suited to working alongside various audio software/hardware combinations on the Falcon. It will run on any Atari, but be aware that audio playback wasn't available on the ST/STFM or Stacy with the last version I've seen (v2). A wide range of file formats can be loaded from disk, and fast SCSI transfer is supported, but direct sampling (to RAM or to hard disk) is only available with Falcons and the extra hardware available for that platform. Once the the audio is loaded, a good selection of signal‑processing routines is available, including sample‑rate convert, timestretching, filters and so on. Zero X is particularly good at finding loops, and does a good job of splitting drum loops into individual hits (creating a MIDI file of the pattern in the process). Contact System Solutions, or go to www.copson.com.

Electronic Cow's Squash It! offers some similar tools to Zero X, but goes off at several mad tangents with a number of unusual signal‑processing tricks. Direct sampling isn't possible, but a wide range of sample formats is supported, and audio playback on all STs is possible (albeit with crunchy quality on an ST or STFM). Squash It! was reviewed in this column quite recently — in April of this year — but here, for newcomers, is a quick run down of facilities. Quite ordinary things can be done to samples (though not looping, strangely enough) but it's the strangeness factor that makes the software so desirable. Processes include squash, shuffle, and stretch; invert, compress, expand, explode, erode and granularise; digital delay, ping‑pong delay, comb filter, low‑pass filter, and envelope shaper; posterise, smooth, sharpen, and blur; low‑frequency, amplitude, phase, and ring modulation; timestretching, frequency expansion, compression and gating; rotary speaker simulator, LFO, comb filters; and more. The names of the operations just give you a flavour of what's on offer. Electronic Cow can be reached on +44 (0)1426 281347 (or ds.dial.pipex.com/electronic_cow/cownet.shtml).

If you don't have a way to create your own samples, hunt down a Microdeal Replay 16 hardware/software package (which allows full 16‑bit sampling, and playback, on even modest STs, and is easy to use), on the second‑hand market. It may occasionally turn up at Atari specialist retailers, so it's always worth asking.

Regular readers will know that FaST Club are one of the few mail‑based public domain libraries left in the Atari world. As such, you really should support them, especially if you lack Internet access. To extend the usability of your machine, consider adding CD‑ROM and hard‑disk drives, if you don't have them already. The latter will make for a more productive Atari time, with less waiting about for disk accesses, and the former will allow you to access sundry software collections that are available on CD‑ROM. As mentioned in recent months, FaST Club have inherited the Floppyshop Gold series from recently deceased PD library Floppyshop; the seven disks, priced at just £12.95 each, compile the whole of the Floppyshop library, plus clip art, sound files, disk mags and demos. Quite a collection, and SOS readers can take advantage of a special introductory price of just £6.95 a CD, for six weeks from this issue's on sale date (July 15). Just tell FaST Club where you saw the offer information.

I've also recently received a copy of issue 77 of FaST Club's mag: ST Applications is a smart little A5 fanzine‑type publication, yet manages to cram a ton of useful info and reviews into its 20 pages. This issue has a report on the last All Micros Show, a little article on MIDI port expansion, and one very useful tip, regarding Dr T's X/Or universal patch editor/librarian. This software no longer exists for the Atari, but was taken over by Mark Of The Unicorn and is now better known, after much development, as Unisyn. Apparently, however, Unisyn modules can be used by X/Or with a simple file‑extension change. Full details are in the mag, which costs £8 for six issues (£10 Europe, £12 ROW). As an extra incentive, Club PD is cheaper to subscribers. A 48‑page catalogue of PD and commercial software is also available for £2.95.