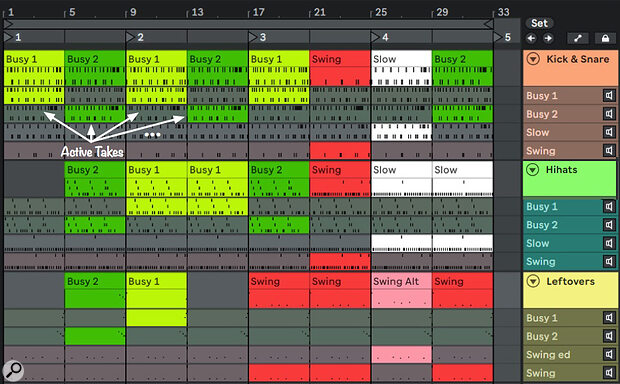 Screen 1. Three Drum Rack tracks playing different kit pieces have four Take Lanes each from which a 32‑bar arrangement is made.

Live 11’s new Take Lanes in Arrangement view make creating a composite from alternative takes (comping) much easier for both MIDI and audio tracks. Individual takes are held in a track’s Take Lanes, from which you can quickly swap segments of any size into the parent track. Loop‑recording in Arrangement view automatically adds a new Take Lane to capture each pass, and with MIDI Arrangement Overdub enabled, takes capture successive MIDI overdubs rather than just the current input, allowing you to easily backtrack. You can also add Take Lanes manually by right‑clicking on the track header or with the key command Shift+Opt+T/Shift+Alt+T, and you can show or hide them from the same menu or with Command+Opt+U/Control+Alt+U.

Comping typically entails real‑time recording of your takes against a looping background (a rhythm section, for example), but here we’ll look at alternative ways to use Take Lanes. All the examples use clips from Live’s Core Library Pack.

The Beat Goes On

In Screen 1 above, I started by comping a MIDI drum part in Arrangement view using the three Backbeat drum clips from the Acoustic section of the MIDI Clips/Drums folder in the Core Library. I dragged the Backbeat Busy clip to a new MIDI track in Arrangement view. That inserts both the MIDI clip and the Plymouth Kit Drum Rack on the track. I then dragged the Backbeat Slow and Backbeat Swing clips to the same track one at a time. That brings in just the MIDI clips to play the Plymouth Kit rather than also bringing in the kits that are saved with the clips (.ALC files). I now have one eight‑bar and two four‑bar clips, but the eight‑bar Backbeat Busy clip will work equally well when split into two four‑bar clips, and that offers more combinations. The kick beginning at the fifth bar starts a bit early, so I nudged it to the beginning of the fifth bar before splitting the clip.

The next step is to extract several kit‑piece groups along with their associated MIDI clips. It’s easiest to do that directly from the Plymouth Kit Drum Rack. To extract the Kick and Snare pads, I selected both and then right‑clicked on the kick pad and chose Extract Chains. That creates a new track with clips for just those kit pieces. I did the same thing for the three hi‑hat pads to get another track with a three kit‑piece Drum Rack and clips to match. All pads have now been extracted from the Slow clip, leaving three clips playing five kit pieces: three toms, a sidestick and a crash cymbal. There are also a number of unused kit‑pieces left in that kit. In order to have four clips on the Leftovers track, I copied the Swing clip to the empty four bars where the Slow clip used to be and then rearranged its notes to play some of the unused kit pieces. Finally, I selected all the clips and, in Clip view, ensured that the Clip Loop switch was turned on for all the clips. Otherwise, stretching them to fill Take Lanes would simply give me empty takes.

I then created a new Take Lane for each clip on each track (four Take Lanes per track). I dragged each clip on each of the three tracks to the beginning of its own Take Lane, leaving the tracks themselves empty. I then stretched all the clips to 32 bars as shown in Screen 1. (To stretch a Take Lane clip, its lane must be at least three units high, revealing the clip’s title bar.)

When I start the arrangement playing, I hear... nothing. For Take Lane segments to be audible, they need to be added to the track. To create each drum part, I selected time segments from the Take Lanes and pressed Enter to place the selected segments on their parent track. (You can drag Take Lane segments to the track, but hold Opt/Alt while dragging if you don’t want the segments to be deleted from the Take Lane. Dragging also requires a three‑unit Lane height, whereas using the Enter key does not.) Keep in mind that once a Take Lane clip is copied to its parent track, it becomes a separate clip — editing either clip does not affect the other. Also note that you can use Live’s new Linked‑Tracks feature to select takes from several tracks at once.

Take Lanes provide an easy way to pick the best and then arrange them to suit.

Leave It To Chance

As covered in the June 2021 Live workshop, Live 11 offers two ways to apply random variations to MIDI clips: Chance and Velocity Range. (Step sequencers are also a good source of random variations.) The problem is that some random variations are better than others. Take Lanes provide an easy way to pick the best and then arrange them to suit. 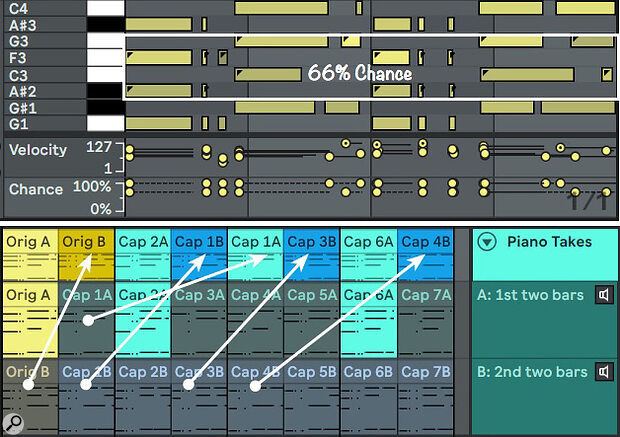 Screen 2. Chance and Velocity Range create variations in a four‑bar piano clip. The part is then fashioned from the best takes.

The comp in Screen 2 comes from slices of the four‑bar, four‑voice Funky Soft C Minor piano loop from the Tonal/Chord Progression section of the Core Library. I first copied that clip to an empty MIDI track and set up Chance and Velocity Ranges for some of its notes. I selected the notes in the two inner voices and lowered their Chance to 66 percent. Then for all voices, I gave the notes with Velocity over 110 a Velocity Range of ‑20.

To pick and choose among the random variations these settings produce, you need to capture them on a new track — either MIDI or audio. For easier editing, I captured MIDI by moving the piano instrument to the new track and setting that track’s input to come from the track playing the loop. In Screen 2, I captured seven randomised clips, which, counting the original clip, gives me eight clips to choose from. To have more options, I split each of the captured four‑bar clips in half and then moved the clips for the first half (labelled ‘A’) to one Take Lane and those for the second half (labelled ‘B’) to another. With this method, a clip’s position in its Take Lane has no relation to its position on the composite track — the composite is mostly built by Opt/Alt‑dragging two‑bar takes to different positions on the track. I kept the A takes alternating with the B takes, but that’s not necessary because the A and B clips play the same chords with slightly different rhythms. The highlighting of clips in the Take Lanes indicates that the Take Lane and track clips are the same — if you move or edit either one, the Take Lane clip goes dark.

Screen 3 starts with the drum and piano comps from the previous examples. The easiest way to do that is to simply drag one of the Live Sets into the other. I dragged the drum Set into the piano Set, which preserves the tempo of the piano Set, but because all the tracks are MIDI, you can adjust the tempo to suit without worrying about editing or Warping. To accompany the drum Set, which is twice as long, I duplicated the piano‑clips sequence in reverse order.

Next, I added an audio track with four Take Lanes to the Set and imported audio clips from the Samples portion of the Core Library to the Take Lanes: four Latin percussion samples from the Loops/Drums/Percussion section in the Take Lanes at each of the even‑numbered Locators and four sound effects loops from the One Shots/FX section in the Take Lanes at each of the odd‑numbered locators. You’ll usually want to turn on Warping for added audio clips and in some cases you’ll want to add and adjust Warp markers. You may also need to manually edit some audio and adjust the clip volumes. Beyond that, comping audio is essentially the same as comping MIDI. 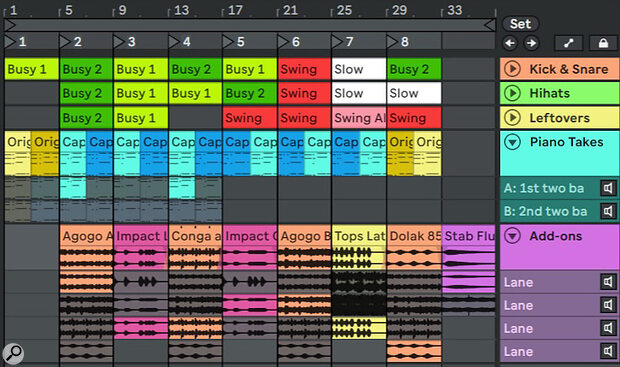 Screen 3. The drum tracks (top) from Screen 1 are added to the piano set from Screen 2. The percussion and FX audio clips (bottom) are then comped to make the Add‑ons track.

Another way to use Take Lanes is to capture Session view Follow Actions. You can do that by recording the Follow Actions in Arrangement view in a loop of any size starting at any point. Then, as in the examples above, you can mix and match the best takes from the captured Follow Actions on all the active tracks. Live 11’s enhanced Follow Actions were covered in detail in the June 2021 Live workshop.