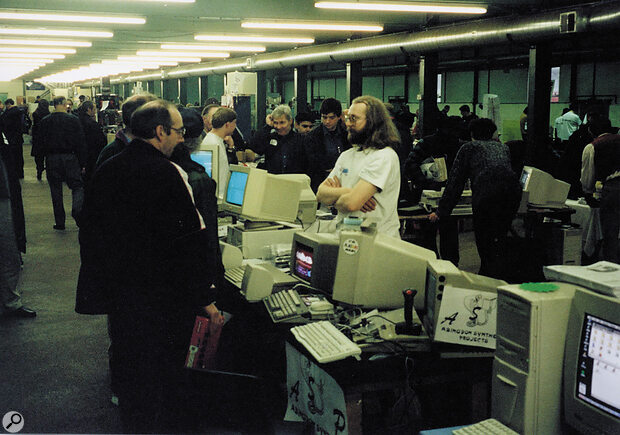 Dedicated Atari users were able to check out the latest from the core Atari hardware and software developers at the recent All Micro Show. Derek Johnson was there for SOS.

Exactly a year ago, I'd just attended the All Micro Show, which had a lively Atari presence, and I'd pumped this column up to two pages to celebrate, at which size it has remained ever since. This January the same convention was staged again by Sharward Events at Stafford's County Showground, and once again it had an Atari presence. I suppose it was rather inevitable to see that presence somewhat diminished — several players in the Atari market have pulled out in the past year — but the vibe was still positive. 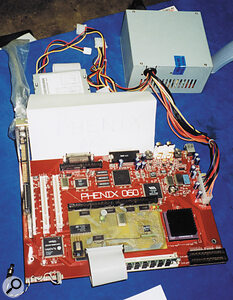 The innards of Centek's Phénix TOS‑compatible powerhouse on the System Solutions stand.

Before arriving at the show, I was expecting it to be a bit thin, but was pleasantly surprised to note a few extra stands manned by late bookers. The intrepid Electronic Cow (0411 544133, web ds.dial.pipex.com/electronic_cow/cownet.shtml) were showing an improved EC909, which moves more in the direction of being a Rebirth RB338 clone by melding a bass synth/sequencer with a TR909‑style drum kit. Time and interest allowing, there may well be more musical goodies from Electronic Cow, who should be applauded for their continuing work in keeping Atari musicians up to date with software trends. Keychange Music Services (+44 (0)1925 266120, web www.atamusic.u‑net.com) were also a last‑minute surprise; they were busily punting official, boxed copies of Steinberg's Cubase v3.1, and also had a scarily fast STE on their stand — powered by the The Upgrade Shop's Veloce+ processor upgrade.

On the System Solutions stand (+44 (0)1344 890008, web www.system‑solutions.co.uk) was a working prototype of Centek's Phénix powerful TOS‑compatible computer. Also new was Anodyne Software's CDWriter Plus v2, which you can read about elsewhere in this column (see 'Going For The Burn' box on page 252).

Abingdon Synthesis Projects (+44 (0)1235 534152, email chrisc@zetnet.co.uk) are the folks who bring Mario Becroft's nifty Atari gizmos into the UK from New Zealand. Mario's gear is notable for allowing Atari users to upgrade the bits of their computer that tend to wear out — mice, monitors and so on — with parts that are easily available from any average PC supplier. His Qwertyx PC AT or PS2 keyboard and serial mouse interface, which allows a PC keyboard and mouse to be attached to an Atari, was attracting much interest on their stand. A prototype was working at the show, and quantities should be available as this mag hits the streets. In a similar vein, a VGA monitor adaptor is also available, which allows you to use the ST's standard hi‑res monochrome mode with a VGA monitor. This is a useful trick, given that mono monitors, branded by Atari or otherwise, aren't exactly piled high at your local PC store. Other devices in development at the Becroft lab are a SCSI‑to‑Ethernet adaptor for ST, TT and Falcon, a VME graphics card for Mega STE and TT, and a CPU accelerator, memory and graphics upgrade on one card. We wait with interest.

Last, but by no means least, I was able to collect my copy of the final issue of Atari Computing in person at the show. The mag is now history, which is a shame, but the last issue came with one pleasant surprise for subscribers: a one‑off freebie CD‑ROM, entitled the Millennium Time Capsule, containing the contents of all 16 issues and all the related cover disks. AC's Renegade CD‑ROM has similar contents, but it justified its £14.95 price tag through a program of upgrades: as new software or upgraded versions of included software became available, new versions of Renegade were released. It is planned for this upgrade program to continue. Contact Atari Computing Subscriptions, 73 Bentinck Drive, Troon, Ayrshire KA10 6HZ for details of the last issue, or visit their web site at www.atari.computing.com/rpl/defa... 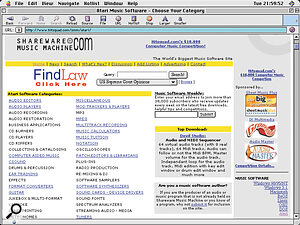 The Shareware Music Machine (left) and The Ultimate TOS Software Index (above).

In last month's issue, reader Paul Sellars introduced us to Gaston Klares' free Composer algorithmic music generator. I've now had a chance to play with this software myself, and it's highly recommended. Gaston has also created the aptly named Sequencer, an 8‑part analogue‑style step sequencer clone, which I'm taking a look at this month.

It could be argued that if there's one area in which the Atari is over‑supplied, it's analogue‑style sequencer clones — without checking my disk and column archives, I can recall at least three others — but Sequencer really puts a nice spin on the genre. It offers eight pattern tracks, each of which can have up to 16 steps, and an adjustable MIDI channel. One phrase you'll see a lot in this little review is 'on the fly', since most parameters can be altered while a sequence is playing; this is usefully true of both step note values and pattern track length. Polyrhythm fans will welcome the chance to play with multiple tracks set to mathematically unrelated lengths. Pattern tracks can be named, and the note values for each step — which can also be altered on the fly — can be shown in sol‑fa, MIDI note numbers or actual note names. You're free to set a velocity value for each step, too. You don't even have to use all eight tracks, or all 16 steps: unwanted tracks and steps can be muted, and unmuted, while the sequence is playing.

Tracks, and steps within tracks, are selected using the ST keyboard's arrow keys. Values are changed and various choices made using a selection of other keyboard presses — the mouse is barely used at all. A sequence can be transposed (up or down nine semitones) on the fly, though any tracks can have transposition disabled (ideal for tracks playing drum sounds). Sequences can be saved to, or loaded from disk, though this is one thing that will stop Sequencer from playing. Pressing the 'Help' key, which flashes a list of editable parameters on screen, also stops playback. Other useful functions include the ability to send MIDI All Notes Off and Reset Controllers commands.

Playback tempo and note resolution (sub‑divisions of the main beat) are two areas that are a little eccentric: both are addressed with counter‑intuitive on‑screen controls (increasing the 'Speed' control causes playback to slow down, for example). But this small niggle can be forgiven since Sequencer will actually respond to incoming MIDI Clock; it also transmits MIDI Clock. This MIDI Clock compatibility opens up some interesting areas of exploration: those of us with more than one computer or MIDI sequencer can sync Klares' software to another sequencer, perhaps a more conventional one, and record its output for further manipulation.

In common with Composer, Sequencer's layout is rather spartan, and there seems to be no way to play tracks backwards, or chain two tracks to create a 32‑step pattern. Nevertheless, it's a fun and eminently useful program that will also run on a TT in high (1280x960) resolution. Check it out at webplaza.pt.lu/public/gklares/Software.html, and do send Gaston a postcard if you like and use his software. 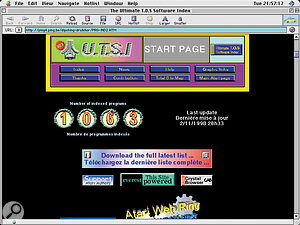 Keychange Music have contacted me following my review of their Proper Job Atari multi‑port MIDI interface for Steinberg's Cubase last month. My review mentioned in passing that some interfaces have been known to introduce delays in the MIDI data stream, and Keychange would like to emphasise that the Proper Job isn't prone to that problem. This is due to the fact that it connects to the Atari's printer port rather than the modem port, as used by older interfaces. Also, it's worth noting that the way in which the Proper Job's extra MIDI input is merged with that on the Atari itself, as mentioned last month, allows for easier interfacing with MIDI devices that generate MIDI sync. For the non‑lateral thinkers amongst you, an obvious application of this extra MIDI In would be to merge the MIDI clock or MTC generated by a stand‑alone hard disk recorder with the output of your master MIDI keyboard, so that parts can be recorded into your sequencer while it's locked to the digital audio. I, for one, can vouch for the elegance and stability of sync'ing an Atari to a stand‑alone hard disk recording system. Note that the Proper Job software driver comes from Keychange, and isn't generally available with Cubase. 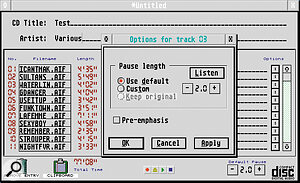 CDWriter Plus can now use the new 80‑minute CD blanks.

This month's Atari web site choice is The Ultimate TOS Software Index (ping4.ping.be/dipching‑drulkhor/PRG‑IND2.HTM). Although it doesn't seem to have been updated for a while, this site should still be your first port of call when searching for downloadable software for ST or Falcon. Many of the freeware and shareware packages mentioned in this column are available there, along with a huge collection of non‑musical software. In a similar vein, but designed for all computer platforms, is the Shareware Music Machine (www.hitsquad.com/smm/atari/), also worth a visit for ST software.

Going For The Burn: Atari CD‑Writing

System Solutions are now shipping Anodyne's CDWriter Plus v2 audio and data backup CD‑recording package for ST, TT and Falcon. The software has apparently been upgraded in response to user feedback, and now comes bundled with the CDBackup utility. It can also now write to the latest 80‑minute CD blanks and gather material from several sources (including hard drive, other CDs, Jaz disk and so on) as one contiguous recording. It's even possible to swap disks in a removable drive during CD compilation, as long as the drive whose disk is being swapped is not the one currently being accessed by the software.