Arpeggiator is a brilliant new MIDI plug-in within Logic Pro X that is well deserving of its own workshop. The entire suite of new MIDI plug-ins, covered last month, offers amazing real-time MIDI processing formerly only possible by using the MIDI editors or the Environment. The original Logic Arpeggiator, now a primordial memory for users of the latest version, had nowhere near the level of sophistication it has now and wasn't nearly as easy to programme. Simply put, an arpeggiator plays and repeats notes in a chord one at a time in a particular pattern or sequence. Hold down three notes of a chord with Arpeggiator enabled on a software instrument and it's hard to miss the rhythmic awesomeness pulsing in time with your project tempo.

Select the MIDI plug-in insert between the software instrument and the EQ graphic, and choose Arpeggiator from the drop-down menu. MIDI plug-ins are all green, which makes it easy to distinguish from the audio plug-in inserts that are blue. To remove, hover over the insert with your mouse to reveal the three-way split label, then click the menu icon on the right side of the label and choose No Plug-in from the drop-down menu. To bypass, click the power icon near the left edge of the label, or in the traditional way in Logic, by option-clicking. 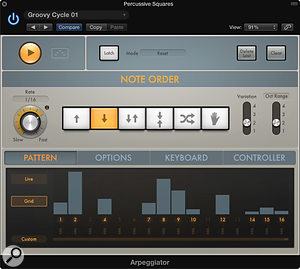 The new Arpeggiator in Logic Pro X is a sophisticated step up from previous versions.

There are a ton of arpeggiated patches in Logic's Library under the Arpeggiator category, each with Arpeggiator adeptly inserted on software instruments to instantly introduce creative movement to your project. Try Traveling Without Moving from the Synth Layers category for a lush, evolving example or one of my favourites, Dynamic String Ensemble in the Acoustic subcategory. A complete cinematic composition could be created with either of these two patches.

When you insert the Arpeggiator on a software instrument, it provides a number of patterns, variations and note inversions that can provide a workable result immediately. When you're in the creative zone there are also tons of easy, and often subtle, parameters to tweak, allowing you to create sounds that range from retro right through to very modern. Any changes made while the arpeggio is playing are seamlessly applied in real time. Here are a few quick moves to try to give you a feel for what's possible before we delve into the full tour:

Here's a closer look at the three main areas of the Arpeggiator plug-in. From the Synth Basics subcategory under the Arpeggiator section in the Library select Percussive Squares (although this will work equally well with any simple polyphonic synth patch). If not already present, insert the Arpeggiator MIDI plug-in on the software instrument channel, then click to open the plug-in interface.

Working down from the top of the interface, the Play button is used to start and stop playback when you trigger notes, regardless of whether Logic's transport is playing or not. To the right of this, click and hold the Capture Live Performance button while the arpeggio is playing. If it's available, the button will glow when you hover over it. Drag from the button to any software instrument track to capture the pattern as a MIDI region that can then be altered in a MIDI Editor, like the Piano Roll. You'll see an outline of the button as you're dragging.

Try the different Latch Mode options in the pop-up menu. Latching allows the arpeggio to continue playing without holding down any keys, but each mode displays a different behaviour. 'Transpose' shifts the arpeggio relative to the key you press, changing the root note of the chord while maintaining the chord type. 'Gated Transpose' is like 'Transpose' mode but the arpeggio only plays while a key is pressed. 'Add' lets you add notes to build up the latched arpeggio. 'Add Temporarily' lets you add notes to the latched arpeggio for as long as the extra keys are pressed, reverting back to the original arpeggio when released. 'Through' lets you play notes along with the arpeggio.

Hit the 'Clear' button on the far right to clear the latch memory without having to turn off Latch mode. 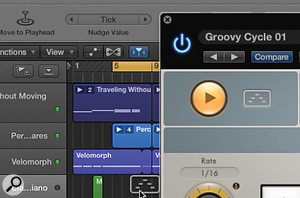 You can drag your live pattern to an instrument track with the Capture Live Performance button, to the left of the Play button.

In the middle section of the plug-in interface, experiment with the Note Order parameters to determine the arpeggio type. This section provides control of the order of notes played and cycled at a preset playback rate.

Try exploring the different note orders by using the arpeggiated factory patch 'Rising Waves' in the Arpeggiator / Synth Basics folder. The direction buttons are labelled with arrows and are fairly literal representations of the resulting note order, with an icon on each button (ie. up, down, up and down). Obviously, the note order is only relevant when you play more than one note at a time. 'Outside to In', the button with arrows vertically facing each other, plays the highest note then the lowest note, followed by the second-highest then the second-lowest, and so on. 'Random', the button with the crossing arrows, plays notes in a random order, while 'As Played' — the button with the hand symbol — steps play back in the order they are triggered. Try the following:

At the bottom of the interface, there are four tabs for Advanced Parameters: Pattern, Options, Keyboard and Controller. Within the Pattern tab, switch to Grid mode and look through the pop-up menu in the bottom left-hand corner. This should be a go-to parameter for quickly finding the right arpeggio for your project. Try out a few now. The Pattern tab has two distinct functional modes, Live and Grid.

Grid mode: controls the velocity, cycle length, rests, ties and chords. Click on a numbered step in the display to enable or disable it from the pattern. To adjust note lengths, click and drag the right-hand edge of each step.

Live mode: Here you can edit the feel of your arpeggiator by adding your own rests and ties to notes for dramatic and creative results. Here's how to do it: 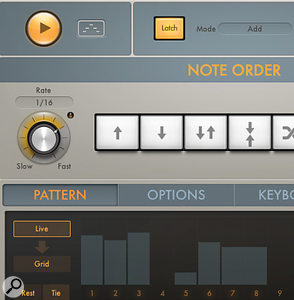 Entering steps, rests and ties in Live Mode.The controls under the Options tab set global playback parameters, such as note length and velocity, crescendo, randomisation and swing. Lowering the Note Length can create a very musical gated effect. Swing is also a parameter you may find yourself adjusting to tighten the synchronisation of your arpeggiator with the rest of your track. Try something extreme like 79 percent to really hear the effect. A little goes a long way here!

Arpeggiator is designed to give you a strong sound immediately, and with factory presets inside the plug-in as well as in the library of arpeggiated patches, introducing creative movement to your project should be a breeze. With Arpeggiator as a MIDI plug-in, it's easier than ever to adjust parameters for that distinctive and memorable extra layer in your project.

The Arpeggiator resolves to 32nd notes. No shorter note values are available with the Rate Knob. What if you want to create something fast? What about a semihemidemisemiquaver? In another new Logic Pro X MIDI plug-in called Scripter, touched upon in the SOS November issue's Logic workshop, you can code your own or modify an existing Scripter arpeggiator preset to use shorter note values. Try playing around with the Harpeggiator script and push it up to 1/128 notes, denoted with a beat division value of 32, for that wobbly, electronic effect.

What Do Mastering Engineers Actually Do?
3 days 21 hours ago.