After introducing the Dynamic Split function in August's Reaper column (read it at /sos/aug13/articles/reaper-notes-0813.htm), we revisit it for this tutorial to cut up a recording into a series of short samples. We'll then move on to loading these audio files into Reaper's simple software sampler to trigger them from a MIDI keyboard.

Begin by recording some interesting sounds — a series of notes or hits that can be captured in a single take, since we're going to split them up later. For my part, I assembled a junk percussion kit from kitchenware, with a wooden spoon as a makeshift drumstick. The idea behind this was to capture a range of sounds with a very sharp attack and decay that would serve as elements of a beat, but then also provide interesting 'swells' when reversed. When recording, I was careful to ensure that each sound had completely died away before producing the next. This restraint limited the creative flow a little, but meant that I was able to become a two-take wonder!

Following recording, the next task is to use Dynamic 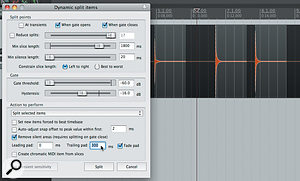 Screen 1: The 'Dynamic split items' window. Using a gate, the split points and silences are detected and this is reflected in a preview shown on the relevant waveform on the screen behind. The 'Trailing pad' function is also employed to provide a fade-out at the end of each split region.Split to separate the hits into individual samples. You access Dynamic Split by first selecting the relevant audio region on screen, and then navigating to 'Dynamic split items…' from the Item processing menu. The quickest way to get to this is to right-click over a highlighted region. On the Dynamic Split window, a number of parameters are adjusted in order to cut the region at appropriate points, remove silence and apply fade-outs. Screen 1 illustrates an example of these settings, with a noise gate being used to sense where the hits and silences occur in the waveform. Any changes made to the parameter settings are reflected in a visual 'preview' on the highlighted waveform on screen, defined by the lighter and darker grey sections shown on the picture.

Once split, the audio regions may require a little manual editing, and it's well worth taking the time to zoom in and check the results. Fade lengths may need to be adjusted for sounds with an unusually long or short decay, and start points of the split items might need tweaking if the gate controlling the split points has reacted a little too slowly, and missed the early transients of the sound.

The next step in the process is to export (render) each of the split parts of the original file to new audio files. It's generally good practice to normalise to ensure even playback volume between samples later on:

The exported samples will appear in the project folder named incrementally as '[filename] render 001.wav', and the reversed versions, '[filename] reversed 001' and so on. These can be moved into a separate folder for ease of location later, and this is also an appropriate time to skim through and delete any samples that don't make the cut.

Before we continue, allow me to warn you about the limitations of the ReaSamplOmatic5000. The plug-in (as its name suggests) is somewhat of a Heath Robinson affair, that will only load one sample at a time and refuses to perform any fancy processing! However, the simplicity of the thing makes it straightforward to operate and allows for really fine control of parameters with minimal CPU usage. You could even argue that the plug-in also acts as an educational tool, since it requires the user to do the majority of the work!

The MIDI key range within which the sample will operate is controlled using the 'Note start' and 'Note end' settings. By default, a sample will play and transpose across the full MIDI note range, with the 'Pitch@start' parameter being used to define where the key note is located (ie. the note required to trigger the sample at its original pitch). Meanwhile, other important playback settings are located towards the bottom of the plug-in window. 'Obey note-offs' determines whether the sample stops playing as the key is released or operates in a 'one hit' fashion, and there are also some loop and cross-fade options.

Adding subsequent samples is achieved by opening extra instances of the plug-in on the same track or, if you like to have maximum control over the editing of individual percussion lines, by placing each sound on a separate track. I like to trigger a number of samples mapped across a keyboard to construct a beat, and this requires key zones to be set up. The first instance of the plug-in holds a sample named '… rendered 001' with its note range constrained to play only between MIDI notes C1 and B1 on the keyboard. Meanwhile, a reversed sample loaded into the second instance of the plug-in plays 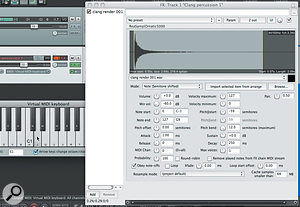 Screen 3: The ReaSamplOmatic5000 plug-in window. The first sample is loaded into the plug-in, trimmed and triggered by clicking a note on the Virtual MIDI Keyboard. In this case, the sample is set to play and transpose across the entire pitch range of the MIDI keyboard and the 'Obey note-offs' function has been selected, to ensure that the sample will stop playing when the key is released. in a key zone an octave higher. For both samples, the 'Pitch@start' parameter has been set to a value of -7 semitones so that the original pitch lies at the mid-point of the octave, with pitch (playback rate) being sped-up above this point, and vice versa. Panning has also been introduced for the second sample for variety in the stereo field.

Velocity layering can be achieved using a similar approach, manipulating the 'Velocity minimum' and 'Velocity maximum' parameters in addition to defining the sample's pitch boundaries. Applications would include switching to a sample with a harsher attack at higher velocities, and layering up additional samples to thicken the texture. Again, multiple instances of the plug-in are required for this. Rest assured, though, the process does get quicker and subsequently less tedious through repetition!

Used in combination, the Dynamic Split function and the ReaSamplOmatic5000 plug-in offer a simple method for separating recordings into samples and triggering them via MIDI. Whilst some of the available tools may be considered primitive, really creative and fun results are possible even with a limited knowledge of sampling practice. Indeed, the processes discussed give those less au fait with sampling techniques the opportunity to hone their skills and better understand what's going on 'under the hood' in more complex plug-ins.