Now that Pro Tools 11 has been available for a while, is it living up to its promise?

Pro Tools 11 was announced back in April 2013 at NAB in Las Vegas and released at the end of June. In some ways, it represents the biggest change that Pro Tools have experienced for many years so, six months on, I thought it would be useful to see how the dust has settled, and also to dispel some of the common misunderstandings about Pro Tools 11.

Firstly, people often ask me if I am using Pro Tools 11 and answer is yes, I am. I have been using it from release day, in fact, although some projects have forced me to return to Pro Tools 10 in order to make use of a particular plug-in. And if I had a pound for every question I have had abou 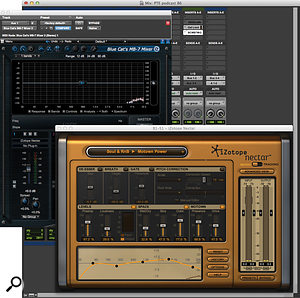 Here, Blue Cat Audio's MB7 plug-in is hosting iZotope's Nectar as a VST plug-in within Pro Tools 11.t why X, Y or Z plug-in doesn't work with Pro Tools 11, I would be a very wealthy man. The simple answer is that Pro Tools 11 only supports AAX 64-bit plug-ins. RTAS and TDM plug-ins will not work at all with Pro Tools 11, and neither will AAX plug-ins, unless they are compiled for 64-bit operation. This means that if a plug-in developer decides not to re-code their plug-ins for AAX 64-bit, you won't have access to them in Pro Tools 11.

However, the news is not all bad. If a plug-in developer produces a 64-bit version of the plug-in for the more widely used VST standard, you can make use of one of several Pro Tools AAX plug-ins which can host 64-bit VST plug-ins, such as Blue Cat Audio's MB7. This workaround has Avid's approval — on one condition. You might remember that a wrapper plug-in briefly appeared from Sugar Bytes, but Avid forced this to be withdrawn from sale; and FXpansion, who for many years made a VST-to-RTAS format wrapper, were likewise prevented from developing a VST wrapper for the AAX format. So how come Blue Cat's MB7 is OK? Avid have gone on record as saying that plug-ins that host VST plug-ins as part of wider functionality are OK, but plug-ins that are purely wrappers will not be approved.

Avid were very aware at the launch of Pro Tools 11 that there would be a good number of popular RTAS and AAX 32-bit plug-ins that wouldn't initially be available in AAX 64-bit. To this end, they have made it possible for Pro Tools 10 and Pro Tools 11 to coexist on the same computer, subject to a few requirements. Firstly, the Pro Tools 10 version must be 10.3.5 or higher — the latest is 10.3.7. The reason for this is that Pro Tools 11 installs some of its files in different places (and on the Mac, it's now a single application that goes into the Applications folder of your computer). On the Mac, for instance, you will find a Pro Tools folder in the Documents folder of your user account. In there is all the documentation, Grooves, I/O Settings, Plug-in Maps and Session Templates, while the Plug-in Settings folder has been transferred from its old location in the Digidesign folder to this new Pro Tools folder. Earlier versions of PT10 would not know where to find these files, but 10.3.5 onwards are wise to their locations.

One fly in the ointment is that Avid have made the icons for Pro Tools 10 and 11 the same, so when you have them both in the Mac Dock or as shortcuts on your desktop, there is no easy way to tell them apart. The good news is that there are a number of third-party icons out there you can get and use so you can tell them apart easily. On the plus side,

Russian roulette: one of the two Dock icons on the left opens Pro Tools 11; the other, Pro Tools 10... missing plug-ins apart, you should have no problems transferring sessions between Pro Tools 11 and 10, as they use the same format. Pro Tools 11 will also open sessions from versions of Pro Tools as far back as 5.1, and by using the Save Session Copy option, you can save sessions not only in the latest version for Pro Tools 10 and 11, but in the formats used by Pro Tools 7 to 9 or Pro Tools 5.1 to 6.9.

Avid told us when they announced and launched Pro Tools 11 that it would be much more powerful than previous versions. Six months on, does real-world experience bear out that claim? The simple answer is yes. If you are running lots of virtual instruments, Pro Tools 11 makes life so much easier, and the buffer errors that plagued previous versions are banished. For example, on a computer running Pro Tools 10, I managed to add 98 tracks each containing an Xpand! virtual instrument and D-Verb plug-in before Pro Tools fell over. Pro Tools 11, on the same computer, happily ran 256 such tracks, and I could have added more if we hadn't reached the track limit. I have seen similar improvements with new high-end reverb plug-ins. For instance, Pro Tools 10 would run 24 instances of a reverb plug-in before the CPU Usage became too high, whereas with Pro Tools 11 it was possible to use 72 instances of the same plug-in and still have power left.

All of this is due to the new Avid Audio Engine (AAE) replacing the old DAE (Digidesign Audio Engine). The AAE also enables a long-requested new feature: offline bouncing, which works a treat. I would never use offline bounce for my final mix, as I still want to hear the mix all the way through, whether it's a music or post job. But for outputting deliverables and stems in post-production work, it is already saving time. I understand that for some post-production users, it will take the time it takes to complete the deliverables down from four days to half a day. Another boon for post users is sample-accurate automation: previously, I could not trust Pro Tools to manage automation changes at exactly the right point, but now that every automation point is time-stamped just like audio files, we can be confident that it is doing the right thing at the right time.

An unexpected result of these performance improvements is that Pro Tools 11 is giving older machines a new lease of life. Some computers that are no longer officially qualified for Pro Tools 11 actually work much better than they did with Pro Tools 10, so try moving to Pro Tools 11 before you commit to upgrading your computer! The exception to this point concerns the new Video Engine in Pro Tools 11, which will play any Avid media out of the box without transcoding. Unfortunately, older computers with Intel Core Duo processors, like my trusty MacBook Pro, cannot use the Avid Video Engine in Pro Tools 11 as it requires an i5 or later CPU. However, this is only likely to be an issue if you need to work to picture for post-production work or film and TV music composition.

A relatively small number of audio interfaces are officially supported with Pro Tools 11: Avid's compatibility chart lists the 003 family, the Mbox 3 family, the Mbox 2 family and the Fast Track family. Avid have listed the 002 family as untested but we are seeing reports they continue to work. Avid have dropped official support for blue-fronted interfaces like the 192 and 96 I/O, but even though these interfaces are now in the 'untested' category, most users are finding that they continue to work with Pro Tools 11 HD with HD Native and HDX cards. Third-party HD interfaces from Lynx, Apogee and others are in the same boat, but please note that pre-HDX TDM cards will not work with Pro Tools 11.

Pro Tools 9 broke the link between hardware and software by including support for the widely used ASIO and Core Audio standards. This continues in Pro Tools 11, though Avid don't offer support for any third-party interfaces. Anyone planning on using Pro Tools 11 with non-Avid hardware should check the manufacturer's web site for information about compatibility. As a general guide, if the interface supports Core Audio on the Mac or ASIO for Windows, it should work in Pro Tools 11; but do check for the latest drivers before upgrading to Pro Tools 11. If the drivers haven't been updated for a while 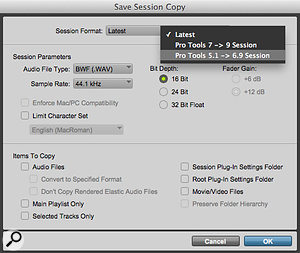 Pro Tools 11 is backwards compatible with versions as old as 5.1, thanks to the Save Session Copy dialogue. this should ring warning bells.

Before upgrading to Pro Tools 11, make sure that you have a second-generation iLok key, as in common with an increasing number of new plug-ins, it cannot be authorised to one of the older dongles.

Finally, who would have thought new metering standards would really change anything? In practice, however, the new metering makes a serious amount of difference even when setting input levels, and also when having to deliver to different specs. On HD systems it is great to have the choice of different meter ballistics. As a UK broadcast user, the ability to use the BBC PPM scale is like coming home. In older versions, I never put much store by the Pro Tools meters, other than as providing some basic indication that there was audio on the track that wasn't clipping. Now I can display all the track metering in my beloved BBC PPM ballistic. All we need now is for loudness standards to be supported, and when I interviewed Chris Gahagan, Avid's Senior Vice President of Products and Services at NAB 2013, he assured me these would be added in a future update.

Many students were eligible for a free upgrade to Pro Tools 11 as part of a four-year offer, but there are a number of students who still haven't received an email telling them how to upgrade. If you're in this position, the best plan is to contact your dealer, who should be able to sort it out with Avid, but there have been reports of dealers being unwilling or unable to do this. The good news is that there is a very useful page on the Avid site which you can use to get in touch with Avid (http://avid.force.com/Support/RegistrationCaseCreation). This page also hosts a number of useful FAQs concerning topics such as academic eligibility and checking your educational verification status.