Bass Guitars In The Mix

Fitting bass guitars into your mix can be problematic for many reasons. The playing style of the bassist, in particular, can make life difficult, especially if they're inexperienced and don't play in a positive, assertive manner: if all you hear is a series of apologetic notes and the rattling of strings on frets, there's little you can do — and you may as well start loading up those sampled bass sounds right now. If the playing is clean and solid, though, here are a few pointers... 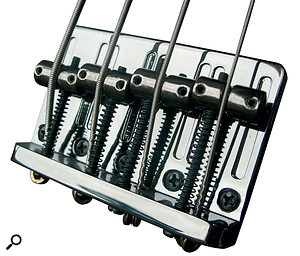 1 If you're miking an amp, listen to a test recording to ensure there are no over‑loud or over‑quiet notes caused by standing waves in the room. If there are, move the mic and bass cabinet and try again. Being too close to walls, corners or the exact centre of the room tends to exaggerate such problems. Even if you do get a great sound from the mic, it's just as well to record a clean DI on a separate track at the same time, in case you need to change the sound later.

2 The way a bass sound is perceived depends on what else is happening in the mix. What sounds deep and fabulous on its own may turn to mud once all the other tracks are brought in. Listen to your mix with the bass muted, and check what else is happening at the low end. In most mixes, the only other deep bass should come from the kick drum — so use your high-pass filters set to 12 or 18dB/octave to trim away unnecessary low frequencies from other instruments and voices.

3 In a typical pop or rock mix, the kick and bass work together, so ensure they're correctly balanced. Some engineers like to carve a 'hole' in the bass guitar with EQ or side-chain compression to allow the kick its own sonic space, but it's best to evaluate this on a case‑by‑case basis. Sometimes songs works best if the kick and bass merge into one sound, while others demand distinctly different sounds.

4 When blending a DI'd bass with a miked amp or the output from an external processor, the low end will suffer if the signals aren't in phase. Getting them in phase is easy to do by looking at the waveforms of the two tracks and moving the miked track so that it lines up exactly with the DI (if it doesn't already do so). You may be able to do this with the track offset feature of your DAW, or by simply dragging the track by a tiny amount. If this doesn't offer adequate resolution, try advancing the track so that it is just ahead of the DI track, then use a sample delay plug‑in to achieve perfect alignment.

5 Bass isn't all about bass! If it was, you'd hear little or no bass guitar on a small transistor radio, as radios can't reproduce the same low frequencies that larger speakers can. To ensure that your bass part can be heard on small consumer systems or computer speakers, play your mix through a 'grot box' such as a cheap, stand‑alone music centre with an aux input, and then adjust the EQ in the range 250Hz to 1kHz to ensure that the bass sound has enough character in that region to remain audible. This will also help give the bass definition in a busy mix when heard over full‑range systems. Sweeping through with the EQ set to boost will pinpoint where the effective frequencies are for your particular instrument.

6 Use compression to keep the bass level even, especially if the player indulges in a lot of pulling and slapping. If you're confident about setting up a compressor, try adjusting the attack time so that the transient of the note punches through uncompressed. Combine this with the fastest release time you can set without gain‑pumping becoming obvious. Medium ratios of around 5:1 work OK with bass, but you can also go higher if the player has a very wide dynamic range. Aim for gain reduction of around 8dB on the peaks as starting point, then adjust the threshold control until the part sounds tight and even.

If you're less confident with compressors and are using software, by all means use a preset designed for bass guitar — but note that you'll still need to adjust the threshold control to set the required amount of gain reduction. Sometimes feeding the bass guitar and kick drum through the same compressor will help the sounds to integrate.

7 If the bass sound isn't working in the track, there's no reason not to process it via a guitar-amp or bass-amp modelling plug‑in, as these can add a thickness and character that's difficult to achieve using compression and EQ alone. Many amp models include subtle (and some not‑too‑subtle) distortion components, which can make a bass sound louder and more punchy, providing you don't overdo it. This technique applies equally to DI'd and miked recordings.

8 Another salvage technique is to use a 'fingerprint' EQ (such as Logic's Match EQ or TC's Assimilator) to impose the tonal character of a known good‑sounding bass part to the one you're working on. You can even use a decent‑sounding sampled bass as the reference, and then create an EQ curve to match your own recording to it. Such plug‑ins compare the spectrum of the two sounds, then generate a complex EQ curve to give the sound being processed the same average spectrum as the reference.

9 When mixing, the ears very quickly become accustomed to the mix sound, so when you think the mix is almost there, turn the bass right down, then gradually bring it up again until it sounds right to you. If the fader is back where it was before, you're probably not far off — but do take a break and come back to it, as your perception of a mix can change after a rest. Playing commercial mixes in a similar style can help you retain a sense of perspective, and also provide a reference to aim for.

10 If you can get great results by completely ignoring the first nine points, then do it! Guidelines are only guidelines, after all. Paul White