There's more to Prologue than its presets - and it doesn't take long to create some excellent and unique patches. 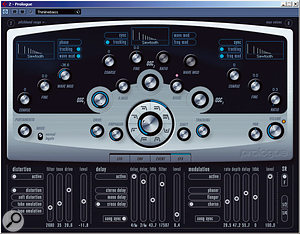 The main Prologue user interface.Some powerful VST synthesizers are now included in Cubase, and although they contain various great presets it's well worth delving deeper to create your own patches. This month I'll explain how you can start to make custom bass sounds using the Prologue synth.

Before I start, it's worth reading the comprehensive technical information about Prologue in the Plug-In Reference PDF — and the signal-flow diagram at the end of the VST Instruments section is particularly helpful.

Prologue is a virtual subtractive synthesizer that has three oscillators, each of which offer the same selection of waveforms — with the common sawtooth, parabolic, square, triangle and sine waves supplemented by some more unusual options. The balance between the three is set via the Osc 1, Osc 2 and Osc 3 rotary controls, and setting any of these controls to zero mutes the output of that oscillator.

Oscillator 1 can be considered the 'master' oscillator that determines the fundamental pitch for the overall sound. Oscillators 1 and 2 both feature wave modulation, and Oscillators 2 and 3 offer frequency modulation. This isn't the place to go into the intricacies of various synthesis technologies (see the 'Waving At The Freqs' box below, or for a comprehensive explanation try Paul Wiffen's 'Synth School' series starting in SOS May 1997, or Gordon Reid's epic series 'Synth Secrets' that started in SOS May 1999). Wave modulation and frequency modulation both modify the fundamental waveform being used, allowing you to create a greater range of sounds.

The outputs from the oscillators are combined prior to processing through Prologue's single filter section, which offers a good selection of low-pass, band-pass, high-pass and notch filter types, and a number of further controls that include the usual frequency cutoff and resonance (labelled 'Emphasis' in Prologue). Further sound-sculpting can then be performed using the LFO, envelope and effects sections.

Waving At The Freqs

So which of Prologue's waveform types work best for bass sounds? Trawling through the bass presets shows that sawtooth and square waveforms are often used as a starting point. The mini displays for each waveform type show why: while they contain lots of harmonics, both square and sawtooth waveforms are dominated by the fundamental frequency of the note being played (compare these with the Neg Slope 9 waveform, for example) — which means a healthy dose of bottom end on low-pitched bass notes. 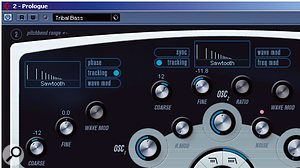 The 'Tribal Bass' preset uses detuning between Osc 1 and Osc 2 (as indicated by the 'coarse' and 'fine' settings), to achieve a fatter, chorus-like effect.Two presets provide good examples. 'Thinlinebass', based only on a single oscillator set to a sawtooth wave, is one of the simpler bass sounds, but it has been fattened up using wave modulation and gentle distortion. Turning off the wave modulation (using the button beside the waveform display) and the distortion (via the EFX window), allows you to hear just the waveform and filter working. In this case, the distortion was contributing significant additional harmonics to the sound, but the mid range and top end can also be increased by opening up the filter cutoff slightly.

For something a little meatier, look at the 'Tribal Bass' preset, which combines two sawtooth waveforms but, aside from detuning (both coarse and fine) and the filter, uses almost none of Prologue's other processing options. The detuning provides a fatness to the sound: the coarse detuning gives the sound energy at both low (via Osc 1) and high (Osc 2) frequencies, while the fine detuning provides an almost chorus-like effect. In this case, the pitch of Osc 1 is also controlled by the LFO, resulting in the slight 'wah' element of the sound. Other good preset examples based on sawtooth and square waves include 'Pulse Bass', 'Ultra Fat Bass' and 'Deep Wish'.

While the sawtooth and square waveforms provide excellent starting points for bass patches, a number of other waveforms are also suitable. If you select the parabolic, triangle and sine waveforms, you can see that they contain relatively few harmonics. If used in their raw forms, they tend to produce sounds with little 'brightness'. Other good waveforms for bass include Formants 1, 2 and 3, the Vocal Vowel 'O' and 'U', Partial Not Prime, and the higher-numbered Slope waveforms. Check out the 'E-Bass' preset for an example of what these other waveforms can offer. This patch combines Reso-Pulse 1 (Osc 1) and Formant 3 (Osc 2) waveforms. The latter provides the roundness, while the former is tuned down by an octave, giving the whole sound more 'growl'.

Other waveforms (such as some of the Reso Pulse and Neg Slope types) are less suitable for bass patches, as they're dominated by higher harmonics — though in combination with other waveforms they can help the sound cut through by adding some top-end definition. 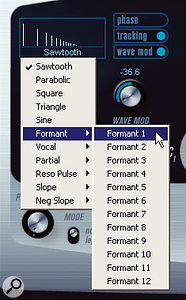 Prologue offers a wide range of waveform types, many of which provide excellent starting points for bass sounds.Having configured Prologue with your waveform (or waveforms) of choice, there are plenty of ways to enhance your sound. Both the wave modulation (as used in some of the presets listed above) and frequency modulation can be used to modify your basic waveform selections. The degree of wave modulation to Osc 1 or 2 is set via the Wave Mod knobs, and generally serves to thicken up the basic sound.

FM synthesis is a more complex beast (read parts 12 and 13 of 'Synth Secrets' if you need convincing of this), and random experimentation is likely to create something as musical as scraping chalk across a blackboard. However, the 'FM Based' preset shows that Prologue's FM capabilities can be useful in creating bass tones. This patch combines two sawtooth waveforms with Freq Mod engaged on Osc 2 (so the frequency of Osc 2 is modulated by the frequency of Osc 1). If the output of Osc 1 is turned down, the almost hollow or bell-like sound generated by Osc 2 can be heard. The Ratio control adjusts the amount of frequency modulation. With FM engaged, the functions of the Coarse and Fine controls change, so they adjust the frequency ratio of Osc 2 relative to Osc 1. Adjust both to the lowest settings and then compare the sound of Osc 2 with Osc 1: the further you adjust these controls from this point, the more dramatic the change in Osc 2's output.

Ring modulation and noise generation provide yet more options prior to the signal reaching the filter. There's little I can add to what is in the Plug-In Reference PDF, but the noise generator is probably of most use when creating percussive sounds, while the ring modulator is often used for bell-like sounds (as demonstrated by the 'Bell Mondo' preset).

* VST3 Plug-ins: Leading German software synthesizer and virtual effect manufacturers VirSyn have announced the first VST3 update of a third-party plug-in. With the update to version 1.1, VirSyn's Matrix Vocoder is now available as a native VST3 version for Mac OSX 10.4 and Windows XP from the VirSyn web site at www.virsyn.de/en/E_Home/e_home.html.

* Cubase 4.1.2: The catchily-titled Cubase 4.1.2.851 update was recently released, making Cubase 4 officially compatible with Mac OSX 10.5. The update also includes bug fixes and other minor improvements, not least of which is support for Euphonix's new Artist series controllers (reviewed elsewhere in this issue). A similar update is available for Nuendo and Cubase Studio 4. Visit www.steinberg.net/1044_1.html for further information.

Of course, Prologue's sound-shaping functionality goes beyond the basic choice and combination of oscillator waveforms. The filter is obviously a crucial tool here, and it sounds excellent. Again, its controls are well described in the Plug-In Reference PDF, so I won't retread that ground: for bass sounds, it is sufficient to note that the majority of the preset patches feature one of the low-pass filter types, and raising the filter cutoff will produce a brighter bass tone.

When frequency modulation is selected, the Coarse and Fine tuning controls adjust the frequency ratio (in this case between Osc 1 and Osc 2).There are still further tools at your disposal and the controls within the LFO, Env, Event and EFX windows offer plenty of scope for adding more expression to your patches. By way of example, let me explain how you can use the LFOs to add extra colour and interest to your sound.

Prologue has two identical LFOs, each with a choice of waveforms and the ability to change both the speed and the way the trigger of the LFO syncs to notes played. The LFOs are used to modulate (either subtly or more dramatically) some of Prologue's other controls. For example, you might set the LFO to vary the filter cutoff, the output level of one of the oscillators or the amount of wave modulation applied to an oscillator.

There are two ways to do this. First, clicking within the Mod Dest box brings up a list of all the possible targets for the LFO. When a parameter is selected here, the LFO simply modifies the chosen parameter over time, based upon the LFO waveform selected. For smooth, gradual shifts, the sine and triangle waveforms work best. The number beside the LFO destination controls the amount (depth) of modulation applied by the LFO. A simple example of this is supplied by the 'Deep Wish' preset, which applies LFO modulation to the Osc 2 Wave Mod level. If you sustain a note beyond its initial attack (shaped here using the Envelope controls) this can be heard as a pulsing element of the sound, as the amount of wave modulation is varied by the LFO. Adjusting the LFO's Speed setting changes the rate of the 'pulsing'. 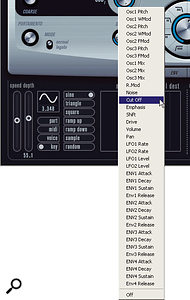 A wide range of parameters can be modulated by Prologue's two LFOs.The second method is to select a modulation target within the Vel Dest box: the same list of targets is available, but the degree of modulation varies dynamically with note velocity. This can be used to add considerable expression when playing. As an example, try removing the Mod Dest entry in the 'Deep Wish' preset mentioned above and adding the same Osc 2 Wave Mod selection in the Vel Dest box instead. Set the amount to 99 and then play notes of varying velocity. The degree of wave modulation applied to Osc 2 will vary with your playing.

The LFOs open up a huge range of possibilities for creative sound-shaping. Modulating the filter parameters is a great way to add interest — for example, raising the cutoff frequency to give a brighter sound based on the velocity of a note, or increasing the drive to produce greater distortion on louder notes — but there is plenty of scope with other parameters too. If you're looking for something more complex, multiple destinations can be specified for each LFO, and the 'Brett Bass' preset provides a good example: LFO1 is used to apply pitch-shift to all three oscillators, bringing a rich, chorus-like quality to the sound.

The Envelope controls provide a further means of sculpting your sounds, while the Event settings provide real-time control via the Mod Wheel, note velocity and aftertouch — and all this can be topped off via effects such as distortion, delay and modulation in the EFX window (or, of course, via plug-ins inserted in Prologue's output channel).

All this only scratches the surface of what is possible with Prologue — even for producing bass sounds. It is equally adept at pads, percussive sounds, leads and synthetic strings or electric piano sounds, so perhaps we'll return to some of these in future. Until then, happy programming...