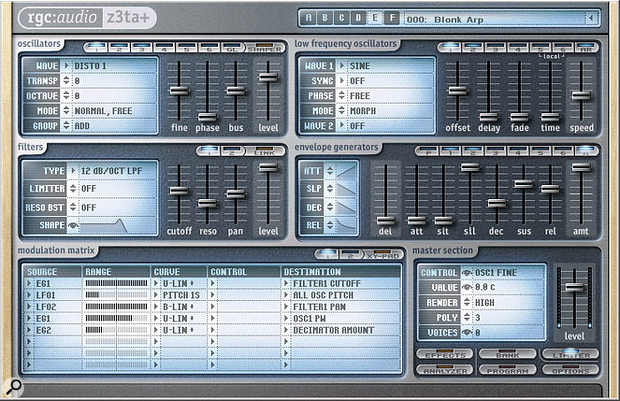 rgc:audio's original version of the Z3TA , a popular download among those seeking new sounds. Cakewalk's version retains the features of the original.

Historically, computer-based music in the US was the province of the Macintosh, due to the early appearance of MOTU's Performer, Passport's Master Tracks Pro and Digidesign's Sound Tools (later Pro Tools). The Atari also scored big for a while, with Cubase and Logic (orginally Notator). Initially, the PC was not taken seriously by the pro music community — with the exception of Cakewalk, who committed to the PC right from the days of DOS.

Cakewalk stayed on the sidelines for years; 'serious' musicians refused to give their software any credit, mostly because of the Windows platform. Yet, slowly, a group of dedicated Cakewalk users started to grow. They enjoyed the low cost of the PC and found that Cakewalk's products did the job quite well.

Eventually, Apple faltered, providing a window of opportunity for Cakewalk's Pro Audio line. Apple have come back strongly of late — but before they renewed their commitment to music, many who had just discovered computer recording cut their teeth on Windows, while some musicians crossed to the PC after frustrations with the Mac.

Sonar 's introduction marked a turning point for the company, and PC users. The tide in the US started ebbing away from Logic and Cubase: Logic became Mac only, while Cubase was acquired by Pinnacle, who, it seemed, couldn't quite figure out what to do with it (happily, Steinberg have now found a home with Yamaha). Sonar continued to grow in popularity, and a partnership with Roland provided extra muscle with respect to distribution and product development.

Cakewalk then set their sights beyond the boundaries of the US — and it seems that 2005's Frankfurt Musikmesse marked a turning point for those efforts. The push for internationalisation started in late 2004, when Sonar 4 (both Producer and Studio Edition) started shipping in a combined French/German/English version. At the Messe, Cakewalk added Spanish to the list. (And credit where it's due: Sound On Sound were ahead of the crowd in adding a Sonar Notes column to their line-up of sequencer-related editorial offerings back in January 2002.)

Significantly, Cakewalk also took first place for recording software in the prestigious Music Industry Press Awards (MIPA) at Messe 2005, beating both Apple Logic Pro 7 and Ableton Live 4. This was quite an achievement, given that Sonar wasn't even nominated last year. For those not familiar with MIPA (now in its sixth year), the winners are nominated and chosen by the editors of 58 music magazines from all over the world. Many consider it to be the 'purest' award scheme, as neither reader votes nor advertiser pressure are elements in the voting process.

So, Sonar fans, don't let it bother you if some isolated gear snob sneers at you for using "that Windows program." The rest of the world is starting to catch on.

Soft-synth connoisseurs have long lauded rgc:audio's Z3TA+ soft synth, which combines synthesis, processing, arpeggiation and more in a package with a distinctive, clean, almost metallic sound. Now that Cakewalk have acquired rgc:audio, the Z3TA+ is being marketed as a separate product.

The Z3TA+ is not a virtual analogue synth, although its layout and parameter selection will not be unfamiliar to those versed in conventional synthesis. Cakewalk call the synthesis engine 'Bandlimited Waveshaping technology' — basically, a variation on 32-bit wavetable synthesis, but with extensive waveshaping options that add a 'signal processing' feel to the basic oscillators. The bottom line is that the sound quality cuts well, and the synth can produce FM-type sounds as well as fairly lush, evolving pads. Another nice feature is 19 stereo amp cabinet simulations — useful even if you're not going after a guitar sound.

Occasionally I see comments in web forums about Sonar 's MIDI 'bugs'. But dig a little further and it's almost invariably pilot error. One of the most common complaints occurs because of an incorrect choice under Drag & Drop options (something we'll cover in a later issue). However, another of these so-called bugs occurs when you drag a note to extend it and strange things happen — sometimes additional notes show up and sometimes they don't, but when you release your mouse a box appears that says "This editing operation is not allowed." 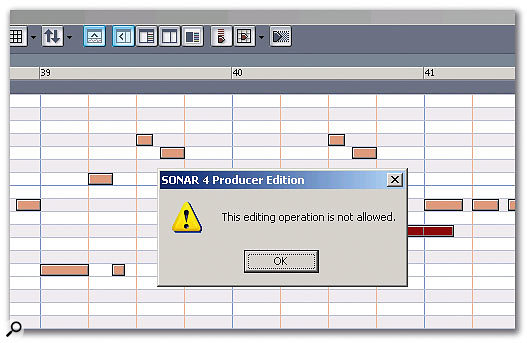 It's not a very informative message, but at least you know something's wrong.

What it should say is "You're editing a MIDI groove clip and trying to extend a note past the loop boundaries" — because that's what's happening. For example, say you have a MIDI groove clip that lasts four bars, you have it 'rolled out' to cover 16 measures, and you're looking at this in the Piano Roll view. There's a note at the third beat of the eighth measure and you want to extend it past the beginning of the ninth measure. But you can't, because there's a MIDI groove clip loop boundary at the start of measures five, nine and 13. If you try to extend that note, you're actually trying to wrap it around to the beginning of the loop, and that's not possible.

The solution is simple: turn off MIDI groove clip looping, copy and paste the four-bar pattern to fill up the appropriate number of measures, then do your edits.