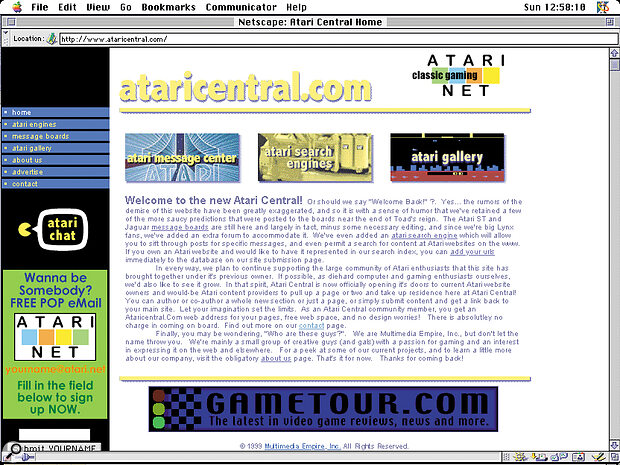 As we enter the 21st century, the amazingly long‑lived Atari ST has been around for 15 years. Derek Johnson goes international to find the best sources of Atari info and highlights some cost‑effective CD‑playing and video‑editing software.

If there's one thing I've learned during my time at the helm of this column, it's that I shouldn't be surprised at the pockets of Atari resistance worldwide. Prowling Atari‑specific newsgroups and web boards on the Internet reveals that even American Atari users can be dogged in their choice of computer, whether it be for music use or games nostalgia. Certainly, there's a vocal minority taking advantage of a domestic second‑hand market that appears to value TOS‑based machines even less than in this country, and hot‑rodding the computers to whatever end.

The hole left by the closing down of Atari‑dedicated magazines and PD libraries is essentially being filled by the Internet. While lurking amongst the web boards recently, I discovered a vibrant international community, providing common ground for the exchange of advice and opinions. You can think of web boards as on‑line newsgroups that are accessed via a web browser rather than a newsreader, and three that I've been lurking at recently include Fuji BBS (lgd.fatal‑design.com/bbs/list.php3?num=1), an ST message board hosted by the revitalised Atari Central (www.ataricentral.com), and the Atari WWW Message Board (www.incontrolinternet.co.uk/atar...). These are general boards — and there are several others to choose from — covering all aspects of Atari use, including music and MIDI topics, but a lot of the general, non‑music traffic can still be of interest if you're just trying to keep your ancient machine flying or are curious as to its upgrade potential.

Regular visitors to this column may remember www.ataricentral.com as the URL of North American Atari specialists Toad Computing. Toad pulled out of the Atari market, but the URL has been inherited by the entertainingly named Multimedia Empire, Inc, based in New York City, who are carrying on with the ST, Lynx and Jaguar web boards.

The Atari scene in Scandinavia, too, is amazingly vibrant, one of its haunts being www.sak.nu. The site, which belongs to the Svenska Atariklubben, is a mine of information (as far as I can tell, having no Swedish!) and SAK also publishes a healthy magazine, Atarimagasinet, which is also, understandably, in Swedish. However, much of the mag's music coverage has been provided by Claes Holmerup, who has uploaded English translation of his work to www.holmerup.com. Although he's moved on to a PC for his own music studio, he was a Falcon user for ages and built up quite a lot of expertise; his on‑line articles provide much useful background on Falcon use in general — for example, using SCSI hard drives or burning CDs.

Proof of how well the Atari is still doing in the Nordic countries is provided by SAK's plans for a three‑day Atari show in June. The Nordic Atari Show 2000, running from June 16 to 18, takes place in Gothenburg. Their web site has details in English, and should be able to help with accommodation if you fancy spring in Sweden! Details of attendees and seminars are a bit vague at the moment, but previous years have had varied programmes of demos, games rooms and commercial exhibitors covering all the TOS angles.

Alexander Clauss, the man behind the Crystal Atari Browser Internet software, probably the most widely‑used browser for TOS‑based machines, is also responsible for the freeware CDPlayer. Available for download from www.tu‑darmstadt.de/~aclauss/, the software does what it says on its virtual box: it lets you play music CDs from a CD‑ROM drive attached to a TOS‑based computer. With CDPlayer, track listings can be catalogued, along with their lengths, so that when the CD is played the software automatically displays the stored data. It's also possible to export such a database as text for use in other applications. Everything else you'd want from a CD player is present — play, search, pause, eject, stop, plus elapsed or remaining time display — and playback is fully programmable. If you need a utility to stream digital audio from CD to hard disk, CDPlayer can do that too — just make sure you have enough hard disk space! It's all easy enough to use, but help is online, in the popular ST‑Guide format.

There's always been a significant percentage of Atari owners using their computers for graphics and DTP, not to mention video capture and editing, though those beavering away at these pursuits are usually happier with Falcons and accelerated machines. One of the most impressive‑sounding programs aimed at such users is Mountain, an Adobe Premiere‑like video editor of French provenance. Rémi Vanel's software, the English version of which has just been prepared by TransAction (www.altern.org/ta/, the new software translation service set up by ex‑Atari Computing editor Joe Connor), allows importing of animations or movies, places them on individual tracks, and offers effects, transitions, movements and transparency effects. You need a certain amount of extra hardware, such as a video card (common varieties are supported) and an 030 Falcon, TT or one of the new breed of fast clones (Hades, Medusa, Eagle or Milan, for example), but the software itself costs only around £45 (FF450 or 69 Euros).

The software can import many popular movie formats, including QuickTime, with more planned for the future. Unfortunately, at present Mountain doesn't handle sound alongside the moving images, but the developers are thinking about it! Visit perso.club‑internet.fr/vanel for an overview, and to download a demo.