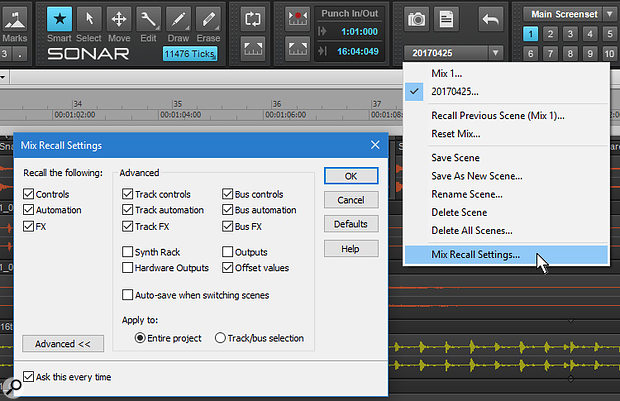 Mix Recall has undergone numerous enhancements, including its handling of virtual instruments. You can specify what you want recalled in the Settings menu.

Craft the perfect mix in Sonar with these handy hints.

The mix is where all your musical efforts come together into a satisfying sonic experience — or at least, that’s the ideal. Fortunately, Sonar has several tools that can help you with the mixing process, so let’s put them to good use.

Thanks For The Memories

Mix Recall is very useful, but it is not ‘clip edit recall’ — it’s a function that comes into play only when the arrangement is complete and you’re ready to mix. While editing, I’ve usually done a rough mix so, when it’s time to do the ‘real’ mix, the first step is taking a Mix Recall snapshot so I can always reel myself in if the song strays too far from its roots.

As you build up a collection of mixes, you’ll likely want to compare them. However if the mixes are complex, it can take several seconds to recall them. The solution is simple: call up each mix, bounce it to its own track, then choose Exclusive Solo. Now you can compare tracks instantly, simply by hitting the Solo button for the track you want to hear.

Another advantage of this approach is if, for example, you nailed the verse on one mix but not the others, you can split just that section, and insert it in a mix where everything else is right. Also, it’s possible to recall only certain elements of a mix. So if you achieved perfect drum levels in one mix but you much prefer another mix except for the drums, you can bring in only the automation for the drums.

Mix Recall was introduced some time ago, but has undergone numerous enhancements over the past few years. I highly recommend looking over the documentation so that you don’t miss out on taking advantage of its talents; the February 2016 Sonar column covered Mix Recall in quite a bit of detail.

Because Sonar’s ProChannel (Professional and Platinum versions) lets you choose a mixer architecture, it helps to have a strategy before you start mixing. For example, the three different Console Emulators have different characteristics, and you don’t necessarily want to use the same emulation on all channels. I find the S-type emulation the least ‘aggressive’ of the three, and tend to favour it for drums — whereas the A-type can get more ‘sizzly’. The N-type usually gets the call for vocals.

I’ve run tests on the Console Emulator, and found that it’s not only about creating the non-linearities inherent in the electronics of analogue gear. There also seems to be input transformer emulation; like tubes, audio transformers are processors that generate distortion, in particular at lower frequencies.

If you turn the Console Emulator’s Drive all the way up, it’s like saturating an inductor. Although people generally don’t use the CE as an effect, when you want the bass to ‘speak’ during a mix, insert the S-type in the bass track, turn up the Drive control all the way, and hit the input hard. You’ll thank me.

A ProChannel setup designed for vocals.The Console Emulator isn’t the only ProChannel module with hidden talents, but you need to know how to take full advantage of what the ProChannel modules offer. For example, the four QuadCurve EQ curves affect the sound in very different ways, and some curves are more suitable for certain instruments and contexts than others. To learn what these curves do, I highly recommend running white noise through the curves (there’s a free white-noise generator FX Chain you can download in the 2017.10 update) and varying the controls — this makes it easy to hear, for example, how Bandwidth affects the sound when you’re boosting or cutting.

The ProChannel is also where you can choose whether or not to use tape emulation, either on the entire mix or on individual channels — or all channels, if that’s what you prefer. However, when mixing it’s important to remember that both Tape Emulation and Console Emulation are cumulative. I recommend not adjusting each one so it’s obvious on any individual track, but rather, when all of them are enabled they should make a difference compared to having all of them bypassed.

You can bypass all of a certain type of ProChannel effect at once; while holding Ctrl, click on the bypass (power) button for one of the modules in a track that’s not selected, and the same operation will happen to all modules. However, the modules have to be the same type — for example, doing this with the modules in a track will not affect those in busses, and vice versa.

Chain Keep Us Together

Of course this is simply personal preference, but I generally use a limited number of plug-ins while mixing. This seems to give a more natural sound, and puts fewer ‘layers’ between the performance and the listener. However, there are certain plug-in combinations that keep ending up in my projects; most are ProChannel, except as noted:

This tip is not a panacea for improving sound, but it’s underrated as a way to clean up your sound significantly with certain types of audio. In brief: recording at 96kHz doesn’t improve sound quality much, if at all, when recording acoustic or electric instruments. However, sounds generated ‘inside the box’ with significant harmonics can push audio above the clock frequency, resulting in foldover distortion or aliasing that adds a type of ‘woolliness’ to the sound.

Using upsampling on harmonic-rich soft-synths and high-gain amp sims can make a significant improvement in sound quality — in some cases, the quality may actually be better than oversampling inside the plug-in. However, note that oversampling stresses out the CPU more with real-time playback, so don’t use it if you don’t need it. (To hear just how much oversampling affects a synth’s sound, check out this video: https://youtu.be/weqI6K0YAKk.)

This is another personal preference, but I prefer rendering all instrument tracks to audio prior to mixing, either by bouncing, recording a software instrument into its own audio track, or recording into an aux track. I do this anyway as a ‘fail safe’ backup for instrument tracks — who knows if the soft-synth manufacturer will be around a year from now, or if it will be compatible with the latest Windows OS? Then, during mixdown, you can archive the instrument and MIDI track to free up CPU for plug-ins that require considerable CPU power (like the L-Phase EQ and L-Phase Multiband in linear-phase mode).

There is much controversy about whether you should master within a project, or regard it as an external process. Suffice it to say that as an award-winning (ahem) mastering engineer, I’ve struck a balance of concentrating on the mix until it’s finished, bouncing it to stereo, and then often — but not always — mastering the final stereo mix within Sonar.

Usually this involves a little EQ, and some loudness maximising from the Waves L3 Multimaximizer. So, at this point, I want the levels hitting the master fader to be relatively close to 0dBFS, because now we’re interfacing with the outside world where we don’t have the luxury of 64-bit floating-point calculations. 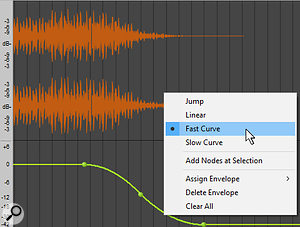 The fade‐out consists of two fade curves, one after another. The second one is a ‘Fast Curve’.If you experience ‘level creep’ during mixing, Quick Grouping is the perfect antidote. In Console View, monitor the master bus meter. Hold Ctrl, then click on an audio track’s fader that is not selected. This essentially becomes your ‘group fader’ and all audio channel levels will follow the fader. Bring the fader either up or down until the master channel’s meter is hitting -2dBFS, or whatever is your preferred amount of headroom. Now you can introduce dynamics control in the master bus, with a predictable input level.

Sometimes it seems like none of the stock curves work for a subjectively pleasing fade-out in the master bus’s fader automation lane, but you can ‘construct’ the ideal fade-out easily.

From DX to MODX with Manny Fernandez | Podcast
1 day 12 hours ago.