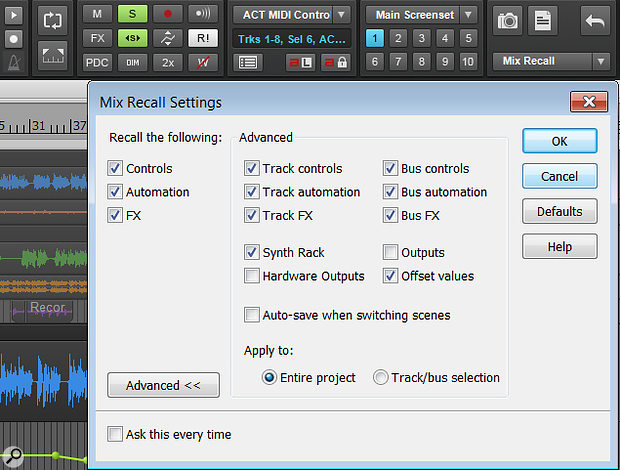 Mix Recall lets you be selective or comprehensive in what you choose to recall with a mix.

Despite being one of the new features in Sonar 2015, I haven’t yet covered Mix Recall. Although it did what it was supposed to do when it debuted, it has continued to evolve and the functionality has become more flexible, to the point where it is now more of a mixing tool. Furthermore, optimisations in the recent Kingston update improved the speed of Mix Recall — so now that it’s reached something of a plateau, let’s investigate.

The concept of Mix Recall isn’t new; it first appeared on super-high-end digital consoles. Automation was new, and Mix Recall was a way to store automation settings — often on floppy disks (now you know how old it really is). Oddly, this was never really translated to DAWs until Sonar added it as a feature. However, because Mix Recall is DAW/computer-based, it does more than the early incarnations. Although ‘save as’ lets you save different mixes and reload them, being able to save mixes within a project, recall just parts of mixes, export multiple mixes simultaneously, and do more than just remember automation changes make the latest version of Mix Recall an important production aid.

Note that Mix Recall is not ‘edit recall’ or ‘arrangement recall’ — it has no effect on anything clip-related (including clip gain and pan automation). If you save a Mix Recall ‘Mix Scene’ and then move a clip, the clip will stay where you left it as you call up different Scenes (although it will be subject to whatever automation info was in the Scene). Mix Recall assumes that you’re done with the editing, and that you’re now dealing with levels, panning, effects and the like. Note that you can’t save Mix Scenes until you’ve saved the project, otherwise Sonar won’t know where to put the Mix Scenes folder.

All Hands On Desk

I was brought up in the era of big mixers and multiple hands on the faders. To me, a mix remains a performance, not a tedious exercise in creating automation nodes with a mouse, nor doing a ‘set and forget’ with faders, as you’d do with a reference mix. Many times someone would push a fader up on the spur of the moment — and that was the mix that made it to the final record.

One of the beauties of Mix Recall is that you can hook up a controller, throw caution to the wind, and let the spirit move you as you change levels. Being able to just scrap a mix that doesn’t work and do another performance often beats editing automation to get where you need to go.

The first step in using Mix Recall is... using it! As soon as I open a project, I save a Mix Scene. Mix Recall can’t go backward in time and remember that great mix you didn’t save as a scene. Mix Scenes, which live in your project folder, don’t require much memory — so save scenes early, and save often.

The text field for a scene name can hold 127 characters; any more than that and you won’t be able to save it. The text field isn’t long enough to show these all at once, but you can use the left/right arrows to scroll, as well as click in the field, select all, copy, and paste the text into Sonar’s Project Info window or a text document. Conversely, you can write the description in a text file (no line returns, though) and paste it into the name field.

Like many Sonar options, the Mix Recall dialogue box offers Advanced or Basic settings (tip: you can open the settings dialogue box with a right-click on the ‘Previous Scene’ button in the Mix Recall toolbar module). Basic remembers control settings, automation and effects settings. Advanced gives many more options, like remembering which effects are included in a mix.

The reason for being selective in what you choose is that the more Sonar has to recall, the longer it can take. This is particularly true with virtual instruments, where you may have changed patches between mixes and an instrument has to reload multiple samples to recreate the mix.

Also note that, while most instruments recall exactly what you saved, some don’t recall everything. For example, if you save a Mix Recall scene using a Rapture Pro preset, then change presets and save another Mix Scene, when you alternate between the scenes the parameter values will change (as will the sound), which is what you want, but the preset name won’t update. Verify how your instruments respond with Mix Recall so you’ll know what to expect.

Cakewalk’s Dan Gonzalez has come up with a very useful Mix Recall trick for trying out different drum kits in Addictive Drums 2 — although, of course, this applies to other drum modules too. He’ll save a Mix Scene with one drum kit, change drum kits, then save as another Mix Scene. He’ll do this for several kits, then switch between them to determine which kit he likes best. 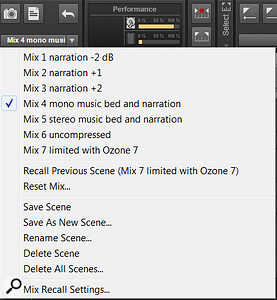 Arguably one of Mix Scenes’ most powerful features is that it can combine mix elements from different Scenes. For example, if one mix had the perfect balance of bass and drums, but a newer mix got everything else right, simply bring the mix data relating to bass and drums into the newer mix. Currently, you can bring in only fader and control settings from specific tracks — not automation envelopes, which limits this function’s usefulness. However, the inclusion of automation envelopes is slated for the February update.

If you want to remove all traces of automation — for example, you’ve started a project in the ‘shell’ of a different project, but want to start afresh with automation — then select all the tracks and choose Reset Mix from the drop-down menu. However, make sure you save the project before you reset, as the reset operation is not undoable and you may end up deleting effects if you forgot you added them later on in the process. The reset not only deletes automation, but zeros the faders and removes any mix offsets.

In Sonar’s Braintree update, Mix Recall templates became an extension added to Project templates so you can now save Template files that reference Mix Scenes. A project derived from this template will automatically copy the Mix Scenes referenced by the template so they’re ready to use. This feature has several applications, like authoring templates with Mix Scenes that have different solo and mute states, or even different combinations of effects that can be switched in via the Mix Scenes. Another application for it is doing a series of recordings with a band. Assuming you use the same basic setup, then you can bring up a template that already gets you close to what you need in the mix.

You can export individual Mix Scenes, or collections of Mix Scenes, simultaneously when using the File Export menu.

This one could also be called the ‘make clients happy’ function. It’s often necessary to create multiple versions of a song; for example, when mastering I often ask for additional versions with the lead vocal up 1dB and another with it down 1dB. With audio-for-video projects, you may want to save a version with the music bed by itself, with narration, with the narration ‘ducked’, another in mono, and so on. Each one of these can be a Mix Scene, so it’s convenient to have them available for recall within the project.

Even better is that Sonar’s Export function lets you export all of them simultaneously, with your choice of file formats (24-bit WAV, 16-bit WAV, FLAC, etc), using the usual File / Export Audio dialogue. For the Source category, select Mix Recall and you’ll see a listing of available Mix Scenes. Choose the ones you want to export, then click on Export. The Mix Scene will be appended to the project name, just before the file format.