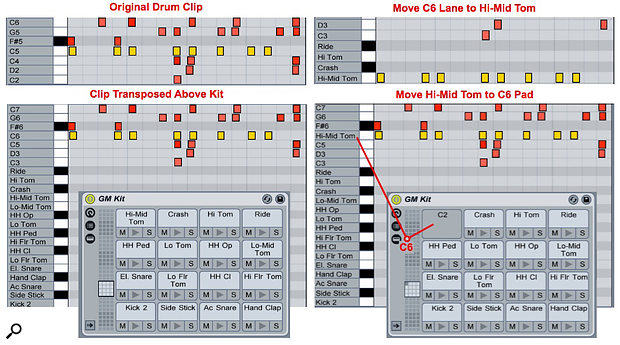 Screen 1: To manually remap a MIDI clip drum pattern (note lane) to a Drum Rack pad, either drag the notes in the lane to the pad’s note or reassign the pad to the lane’s note.

So you’ve just bought a batch of MIDI drum clips and want to use them with your favourite Live Drum Rack, but a groove with the kick-drum pattern played on the hi-hat just doesn’t cut it. Although the simplest solution is to move the kick-drum note lane, when you must do that for one or more kit pieces in each drum clip it becomes tedious in the extreme. This month we’ll look at several ways to remap drum clips without ever moving a note. But because moving notes is the easiest one-time fix, I’ll start with that.

Screen 1 shows a Latin percussion loop along with a Drum Rack using the standard General MIDI (GM) mapping. The first step is to move all the clip’s notes out of range of the occupied pads of the Drum Rack. For that, select all the notes in the clip and use the Up or Down arrow keys to move them. (Hold the Shift key to move by octaves instead of semitones.) Now when you play the clip you’ll hear nothing. To move the drum pattern represented by a particular note lane, you can either select all the notes in that lane (click the corresponding key on the keyboard at the left) and move them to a different lane using the arrow keys, or you can reassign the desired kit piece to the Drum Rack pad that plays the original note lane. To do the latter, either use the associated Drum Rack chain’s MIDI In Note drop-down menu or click-hold on the pad and drag it to the desired location on the Pad Overview to the left. (Option-drag/Alt-drag to copy rather than move the pad assignment.) Your MIDI clips needn’t be on the same track as the Drum Rack. As long as they’re on MIDI tracks whose output is sent to the Drum Rack track, the Drum Rack pads will appear in Live’s MIDI Note editor for each clip.

When Once Is Not Enough

Moving notes must be done for each note lane that you want to remap in each MIDI clip. Moving kit pieces in the Drum Rack eliminates that problem, but then the Drum Rack will no longer play clips designed for it and, in any case, it is not always feasible to change kit piece assignments when using third-party drum instruments instead of Drum Racks. Live’s Pitch MIDI effect provides a non-invasive alternative that works for any drum instrument and all MIDI drum clips that share the same note-to-kit-piece mapping.

The MIDI Pitch effect has three settings: Lowest, Range and Pitch. Lowest and Range together determine which incoming notes are processed — notes outside that range are blocked, and the dot in the middle of the Pitch effect flashes orange to indicate blocked notes. Notes that pass through are transposed by the amount shown by the Pitch setting. Use a separate Pitch effect for each note lane that you want to move to a different kit piece. Set Range to ‘0 st’ and set Lowest to the note you want to move. Finally, set the Pitch knob to the distance in semitones between the note selected as Lowest and the note that plays the kit piece. Screen 2 illustrates, in order of complexity, three ways to set things up:

1. In the simplest example, a single Pitch effect is used with the settings just described. One disadvantage of this approach is that each time you change the incoming note (the drum pattern), the outgoing note (the kit piece) also changes. When you want to audition different note lanes playing the same kit piece, there’s a better way... 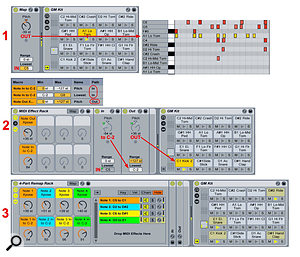 Screen 2: The numbered examples show the three ways described in the text to use a Pitch MIDI effect to remap note lanes to Drum Rack pads.2. This example uses separate Pitch effects for setting the incoming and outgoing notes. The first Pitch effect always maps the incoming note to C-2 (MIDI note 0) and the second Pitch effect maps C-2 to the note assigned to the desired kit piece. The two Pitch effects are enclosed in a MIDI Effect Rack so that you can assign a single Macro knob to select the incoming note and remap it to C-2. The settings are shown above the Rack. Increasing the Macro knob labelled ‘Note In’ changes Lowest from C-2 to G8 while simultaneously changing Pitch from 0 to -127 semitones — each increment in the incoming note decrements the outgoing note so that the outgoing note is always C-2. The Macro knob labelled ‘Note Out Xpose’ uses the opposite range (0 to +127) for the Pitch knob of the second Pitch effect to map C-2 to the desired kit-piece note. Instead of 0 to +127, you may find it convenient to limit the range of each ‘Note Out Xpose’ knob to the pads used in the Drum Rack. If your kit uses the GM map, for example, that range would be 35 to 81.

3. The third example simply replicates the settings in the second example in four chains of the MIDI Effect Rack. That exhausts the Rack’s supply of Macro knobs, but should you need more than four mappings, you can combine several of these Racks as separate chains in another MIDI Effect Rack.

When you want to mix several MIDI drum clips to simultaneously play the same Drum Rack, place each clip in the same Session view Scene but on its own MIDI track. Insert your Drum Rack on a separate MIDI track and then route each clip track’s output to the Drum Rack’s track. MIDI drum clips typically have only a few note lanes, and since you’re mixing multiple clips, you may not even want to use all of those. The four-chain remapping Rack just described will usually do the job, and when it won’t you can combine several of them in a MIDI Effect Rack as just described. 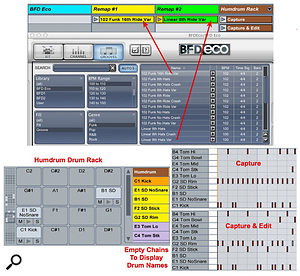 Screen 3: Two MIDI drum clips are remapped and routed simultaneously to a Drum Rack holding the Humdrum instrument (top chain), along with empty chains to provide kit-piece names in Live’s MIDI Clip view. A copy of the captured MIDI clip has been manually edited.

To set things up, first set the Note In Macro knobs in each remapping Rack to capture the drum-clip note lanes you want to use. For each drum-clip track, activate the chains of its remapping Rack one at a time and use the chain’s Xpose Macro knob to re-route its notes to the desired Drum Rack kit piece. If you assign control-surface knobs to the remapping Rack Macro knobs, you can look at the Drum Rack pads to see which ones are playing as you wiggle the controllers assigned to the Xpose Macro knobs. When you have all the drum clips remapped, record-enable the Drum Rack track’s clip slot in the same Scene as the MIDI drum clips and then trigger that Scene to capture the composite drum clip. You can then edit individual note pitches and velocities to further customise the captured drum clip.

Screen 3 shows an example of this process with two MIDI drum clips extracted from the factory MIDI library included with FXpansion BFD Eco. The two clips are remapped on separate tracks and then routed to play a Kontakt instrument from the goat-skin drum library Humdrum by Modwheel (www.modwheel.co.nz). The combined output has been captured on the Humdrum track and then manually edited.

Here, the role of BFD Eco is to provide MIDI drum clips, and you can delete its track once the clips have been exported to other MIDI tracks. Many drum synths have built-in sequencers from which you can export MIDI clips, and commercial percussion libraries often include MIDI clips as well.

The role of the Drum Rack holding Humdrum is to create labels for the Humdrum kit pieces you wish to use. Humdrum occupies a Drum Rack chain assigned to All Notes. Each kit-piece label uses an empty Drum Rack chain renamed for the kit piece and assigned to the MIDI note that plays it. Once set up, MIDI clips on the Drum Rack track (or on any MIDI track whose output is routed to it) will show the kit piece names in Live’s Clip view when its Fold button is active. Turning Fold off will reveal the MIDI note names instead. If you don’t need the kit-piece labels, forget the Drum Rack and insert the drum instrument by itself on that track.