Whether you want to do it for real or fake it, double tracking can add very effective texture to vocal parts. 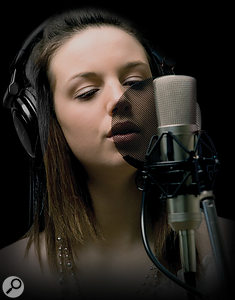 My guess is that double tracking was discovered the afternoon the multitrack tape recorder was invented! If a singer performs the same part twice, playing the two together can give a magical, rich thickening of the sound. However, much relies on the singer's ability to use the same phrasing and pitching on each take: some singers nail it every time, but others seem to be unable to do the same thing twice, producing a messy end-result.

There are numerous methods of 'faking' double tracking, or something close to it, and I'll come on to those, but let's start with some of the tricks you can use to improve an authentic double‑track performance.

Here & Now: If you want the double-tracked performances to sound as close as possible, try, if possible, to record the double very soon after the original. That way, you know that the singer will easily be able to capture the same feel, and that the mic positions, any ambience, and so on, will match up. You'll still get the 'shimmer' but it should feel like a tighter performance.

Cut & Paste: If you didn't know when recording that you'd want the double-tracked effect, you may already have captured the perfect second take. Most songs have repeated sections, so as long as the feel hasn't changed too much over the course of the song you can copy and paste to double up those parts. Be mindful, though, that using identical double‑tracked sections throughout the song could result in a lack of variety.

Pitch Perfect? If inconsistent pitching is the problem, you can use pitch‑correction software, such as Auto-Tune or Melodyne. It's best not to be too aggressive with the treatment: it's easy to iron out all the natural, small pitch‑differences that give you the rich sound you wanted in the first place! 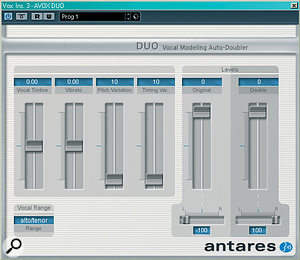 Plug‑ins such as Antares' Duo create two slightly different parts from the same vocal source by varying the pitch, timing and other factors. Although the result isn't exactly like true double‑tracking, it can add some thickness to vocal parts.

Forcing Imperfection: If the singer is too pitch‑perfect, you may have the same problem, particularly on long, held notes, where the two parts can seem to merge. To remedy this, one trick you can try is playing the singer's headphone mix through a pitch‑shifter and offsetting it by a few cents. That way, they'll sing the new parts a tiny bit sharp or flat. You can then use the same amount of pitch‑shifting to offset the original track in the other direction when playing back the results, in order that the nominal pitch‑centre remains correct.

Happy Endings: Where words end on hard consonant sounds, such as the letter T, the results can sound messy unless the singer is ultra precise. A common trick is to ask the singer to soften the ends of words on the second pass so that only the hard endings of the original vocal track are noticeable.

In cases where the singer's phrasing isn't adequately accurate, most DAW software makes it fairly easy to slice the second part into separate words or phrases so that they can be lined up visually with the first track. Where words have been extended too long, or where uncontrolled consonants have slipped through, you can often shorten them using a volume envelope, but where individual syllables are either too long or too short, you may need to break some words down into individual syllables and use time-stretching (or time-compression) to match them to the length of the original. I've done this a lot recently using Logic's Arrange-page region‑stretch facility, and there are similar functions available in most serious DAWs. If you do this a lot, though, consider dedicated software such as Synchro Arts Vocalign.

Don't be tempted to edit something just because it looks a bit out of time on the screen, though: always use your ears to see if something is close enough to sound acceptable before going in with the knife. It is all too easy to fall into the trap of editing with your eyes rather than your ears.

Better Than The Real Thing? 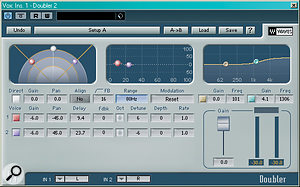 Numerous attempts have been made to find a process that can be applied to a single vocal part to make it sound double‑tracked. Some have proved reasonably successful, and others that failed on a technical level have become effects in their own right.

The Real Fake: The first, and most obvious, process was ADT, or automatic double-tracking, which was usually accomplished by using the playback‑head monitor facility of a tape recorder to produce a short 'slap‑back' delay. It's this technique that creates the familiar effect that was used on countless early rock & roll records, and was famously exploited by artists such as John Lennon.

You can create the ADT effect easily using modern technology. Simply add a digital delay to the vocal at around the same level as the original part, with a delay time of 80‑120ms, and then turn the feedback control to minimum so that you get only one repeat.

Pitch Modulation: More sophisticated emulations combine slight time‑delays with pitch modulation or pitch offsetting. One of the earliest devices to do this, the Drawmer Double Tracker, was based on analogue charge‑coupled delay-line chips, plus an LFO for gentle pitch modulation. The Double Tracker is no longer in production, but you can get similar results by applying a very shallow, slow pitch-modulation to your digital delay line, to imitate the natural pitch variation that occurs with double-tracking. You could also roll some top end off the delay to mimic the limited bandwidth of those analogue delay chips. Plug‑ins such as PSP Audioware's Lexicon PSP42, which includes a 'Doubler' preset, can give a similar effect.

Pitch-shifting: An alternative to pitch modulation is to use pitch‑shifting, just as we did earlier with real double‑tracked parts. Move the original up by four to eight cents, and the delay down by the same amount. This approximates the kind of pitch difference that might occur in a real performance and avoids the sometimes obvious cycling effect of LFO‑driven modulation.

Emulating Real Double-tracking: We now have software plug‑ins such as Antares Duo that try to get closer to a genuine double-tracking effect, something that's achieved by making the small timing and pitch discrepancies between the original and delayed parts more random. Some also create not just a second vocal line but several parts, and allow the formant of the voice to be shifted slightly to create a different character for each of the added parts.

PSP Audioware's Lexicon PSP42 can be used to create very short, bright modulated delays, that give a rich, textured effect similar to 'authentic' ADT.If you have a DAW and a basic set of plug‑ins, you should be able to combine them to find your own recipe for fake double‑tracking. Here are some strategies you can try.

First, copy your vocal onto a second track, delay it by 80ms or so, then use a pitch‑correction plug‑in to pull it tightly into pitch, but not so tightly that it sounds false or robotic. Even if the original part was very well sung, there should now be enough pitch difference to create an audible effect. If you go too far you can end up with a phasey character, in which case use a slower rate of pitch‑correction. It's worth pointing out that though this phasey effect is normally unwanted, it can be great as a special effect in its own right and can be great on guitar.

A variation on this theme is to use a program that lets you change the depth of vibrato present in the original performance without changing the nominal pitch. Some DAWs, such as Cubase 5, have this functionality built in, but if yours doesn't, you can use a third-party processor such as Melodyne. By reducing or increasing the vibrato depth of the second part (which should ideally still be delayed slightly) you may get enough variation to create the desired effect.

For a more subtle ADT effect, try using a reverb program that allows you to create only early reflections (or a short ambience) instead of traditional delay — something like Smartelectronix Ambience is ideal. What you're aiming for is a short burst of fairly bright reflections with no reverb tail. If you bring the pre‑delay value up to 80ms or thereabouts, you'll hear a rich ADT effect that's less mechanical‑sounding, with fewer phasey artifacts than pure delay. You can still combine this with any of the pitch‑shifting or modulation techniques already discussed, and feeding the reverb via a pitch-correction plug‑in can often be successful.

Make Mine A Double!

Double‑tracking can add a pleasing thickness to a vocal part, and although nothing sounds as convincing as the real thing, all the approaches to 'faking it' have their own character, which may just as easily suit your song. Even if you decide against fake double‑tracking on your lead vocal part, you might find it a good way to thicken backing vocals. As a rule, any vocal processing of this kind will make the vocals sound less 'in‑your‑face', so you may need to play with EQ and levels to get the mix sounding properly balanced. So if your singer is capable of doing it 'for real', you may want to try that first. After all, we're all used to recording multiple takes in order to 'comp' the best version, and you only need to play two takes together to get a feel for whether double‑tracking is going to work for that particular song and/or singer.