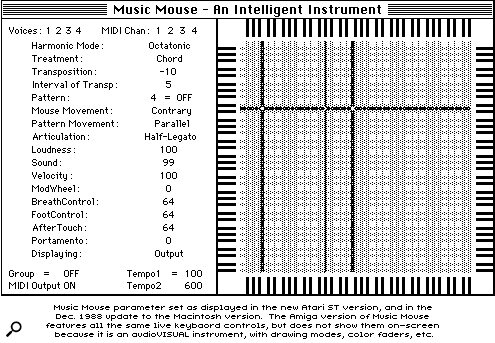 Music Mouse's split‑screen display: on the left are the performance parameters which govern what will happen when the mouse is moved around the note grid on the right. The four cursor lines on the grid represent the notes played by Music Mouse's four parts.

It was during one of my regular Internet surfs for column fodder that I was recently reminded of Music Mouse, Aesthetic Engineering's 'intelligent instrument' from the late '80s. A little digging turned up Music Mouse author Laurie Spiegel's web site, where I found references to the Atari version of the software, and the fact that it is still available! Remembering how intriguing I found the software when I first came across it, I made further enquiries, and discovered that Spiegel has a limited number of original commercial‑release Music Mouse packages, still sealed, that she is happy to sell to interested parties. I'll tell you right away that the program is both copy protected and comes with no support. The date on the disk Laurie kindly sent me says 1988, which is when development for the Atari version pretty much ceased — though since the software started life on early incarnations of Apple's Macintosh, the version for that platform has gone through more development, whilst remaining essentially similar in function. Still, a fully descriptive manual, replete with examples and useful exercises, is included in the Atari package, and the software is such that puzzling over it and playing with it are the best ways to figure it out. 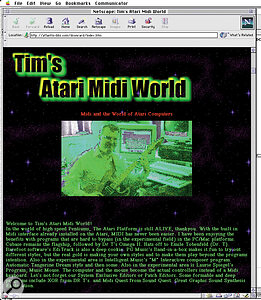 In a nutshell, Music Mouse turns your Atari into a real‑time controller for MIDI sound sources. It's most certainly not a sequencer, though the way in which it generates notes may remind you in some ways of algorithmic composition tools. A Music Mouse performance consists of a combination of mouse manipulation and keyboard presses, which cause certain routines at the heart of the program to generate MIDI notes and manipulate MIDI data. Performer interaction is provided via a split‑screen display. The left side shows a list of performance parameter options, which you alter on the computer keyboard, and the right side is a note grid, bounded on four sides by miniature keyboard graphics. Wiggling the mouse causes the four‑bar 'polyphonic cursor' to move around the display.

Music Mouse generates four voices of data, on between one and four MIDI channels; each voice is represented by a horizontal line (controlled by up and down mouse movements) or vertical cursor line (controlled by side to side mousing), which in turn point to the on‑screen mini keyboard. If you mute a voice, its cursor line disappears from the display. There is a choice of one vertical and three horizontal, or two vertical and two horizontal lines; the former could be seen as providing a melody accompanied by a three‑part chord, though the 'melody' could equally be a bass part. Moving the mouse to the left and down plays lower notes, while mousing to the right and upwards plays higher notes. Careful mouse movement allows melodies to be played over fixed or slowly‑changing chords.

To keep the system from descending into chaos, Music Mouse offers a number of tools. First of all, you can select a harmony type: fully chromatic, diatonic, pentatonic, quartal (based on fourths), mid‑eastern, and octatonic are available. The latter is an eight‑step scale based on alternating half and whole steps that you'll hear used in the works of composers such as Stravinsky and Bartok. There are also four 'chord treatments': block chord, slightly arpeggiated (producing a strummed guitar effect), line (which plays each successive step on a different voice), and improvise, which works like the line treatment but produces chords, suspensions and other simultaneous events.

Music Mouse can be kicked into action without even moving the mouse: turning on the 'Added Patterns' feature causes one of 10 'Generic Patterns' (provided by the program but selectable by the user) to play. Moving the mouse alters the Pattern's playback by giving it different seed material, but it'll happily play by itself. The Patterns are actually basic algorithms, each with its own feel, but as soon as you start interacting with them, the results become less predictable. Further variety is added via controls for parallel and contrary motion for both Pattern symmetry and mouse‑controlled tunes.

Individual voices or the entire output can be muted at any time, so you can move the mouse without creating unwanted note events. Comprehensive transposition is available, so that if MM is generating its own music, using Generic Patterns, you can still influence the performance by changing the pitch of the output. It's also possible to retrigger the last chord played, while transposing it at the same time, making it possible to play simple progressions just by retriggering and transposing. The manual includes exercises to help the user achieve a degree of melodic control over Music Mouse, even to the extent of being able to play familiar tunes, with practice

Other MIDI data over which the program offers control includes volume, velocity, portamento, mod wheel, breath controller, foot controller and aftertouch. Depending on your synth, of course, these various MIDI controllers don't necessarily have to alter their named parameter: if you can remap controllers inside your synth, the program's performance capabilities will be stretched even further. Music Mouse can also generate program changes, but as it was created in 1988 you're limited to 128 programs, which are stepped through sequentially. Still, if your synth allows you to customise a program change map, you'll get a bit more control over what sound will be called up. Note length is also adjustable, with legato, half‑legato and staccato options available.

Tempo is variable between an astonishing 10bpm and 600bpm, but the value range doesn't move in single bpm steps; there are increasingly large jumps between individual steps as you get to the higher values. There's a 'secondary tempo' feature too, and switching to this allows for instantaneous tempo changes. If there's one shortcoming of Music Mouse, it's that MIDI sync was never added before development was ceased: it neither generates nor syncs to MIDI Clock. This might be a problem if one were thinking of sync'ing Mouse‑generated music to a drum machine or other sequencer; it also means that inputting an MM performance into a sequencer will be a bit of a challenge. My own solution was to record Mouse's output into Mark of the Unicorn's Freestyle sequencer, on my Mac; this software allows rubato performances recorded without a click to be re‑barred and otherwise organised into a rational performance. Tim Conrardy, of the Tim's Atari MIDI World web site (see 'Site Survey' box) records MM's output directly into Cubase running on a second ST, and uses the Match Quantise tool to sync it with other material in the current Cubase arrangement.

Perhaps the most logical approach to exploiting Music Mouse's output beyond a real‑time performance would be to record it to analogue or DAT tape, hard disk or a sampler. In this way, you could choose the best bits of a performance (the program throws up excellent snippets regularly) and integrate them into another piece. Remember, you'll always know the tempo of the recorded performance, so integrating the recordings should be quite straightforward, if matching tempi are required. Some kind of recording of Music Mouse's output will certainly be required, since the program itself offers no way to save anything to disk.

A brief description of Music Mouse's controls really doesn't do justice to the music that the software produces, and the fun that can be had while producing it. This really is an instantly satisfying, hands‑on tool, allowing complete musical novices to produce immediately pleasing results. Of course, there's also something here for experienced computer‑based musicians looking for something novel to provide a creative edge. You don't actually input any music, yet it's you manipulating the software, so some of you comes through in the result. Anyone can produce pleasing results, and beginners learning to manipulate MM will probably learn something about music and musicality while not being forced to learn the notes or any traditional musical skills.

What does it sound like? That's tricky. Initially, it'll sound a bit random, minimal, new agey and just plain modern. There will always be surprises, but practice does allow slightly more predictable results to be generated. Surprising chord sequences, unusual melodies and interesting textures just flow from the software. Music Mouse is that rare thing: a piece of music software that appears to grow as the performer becomes more familiar with it, rather like a real instrument. Any Atari‑based musician should think seriously about obtaining a copy of Music Mouse, and any PC users with an Atari gathering dust in a corner somewhere should perhaps fetch out the Pledge and bring the ST back into the studio just to run Music Mouse as an ideas machine. (Mac users can, of course, get their own version.)

At US$29, plus US$6 postage to the UK, Music Mouse is great value. Further information can be obtained from Laurie Spiegel's web site (follow the Music Mouse links from retiary.org/). The software can only be purchased online, using your credit card, via the Kagi online ordering system; this is apparently secure, and saves time and money for everyone, including Laurie Spiegel! Indeed, since the author is a very busy person, with a handful of copies of the software remaining, I've arranged with her to collect Music Mouse queries via this column's email address (atari.notes@soundonsound.com), so that she'll be able to gauge response.

I know I'm repeating myself, but let me just give you final notice of the All Micro Show at Bingley Hall, Stafford this month. There will be a healthy Atari element to the show, just like previous events, and, as mentioned before, Atari Computing will use the show to launch their 16th and final issue. The list of attendees hadn't been finalised as of press time, but Roy Goulding (of the Internet Users' Guide for the Atari), the Portfolio Club and System Solutions will definitely be there, and the show may well offer a chance to see Centek's Phénix TOS‑based workstation in the flesh. November 13 — a Saturday — is the date, and Sharward Promotions are running the event. Contact them on +44 (0)1473 212113 for details; I also found an online pre‑registration discount offer on the the Sharward web site (www.sharward.co.uk/sproms.html). Entry is £3 on the day (or £2 for concessions), which is cheap enough, but £2 if you register online.

Following his tip regarding the Mex2Mid System Exclusive dump utility that I passed on in September's issue, David Etheridge has pointed me in the direction of Tim's Atari MIDI World (atlantis‑bbs.com/dconrard/index.htm). This is an enthusiast's web site that coincidentally features a mini‑review of Music Mouse, which I've reviewed in the main body of this column. Tim also provides a useful rundown of Atari music (and some general) software, plus a handy collection of tips for users of Steinberg's Cubase and, surprisingly, Dr T's Omega II. It's all too easy to forget that the Atari has hosted a number of revolutionary music programs in its time, quite apart from the Cubase and Creator/Notator dynasties.

Tim offers a number of downloads to help illustrate the points being made, as well as saving you some of the work in configuring your software to work in the manner described. Both Cubase and Omega II have powerful MIDI manipulation tools, some of which are a little baffling — the Interactive Phrase Synthesizer (IPS) in the case of Cubase and PVG, or Programmable Variation Generator, for Omega II — and Tim makes a good stab at explaining both. Worth a visit.