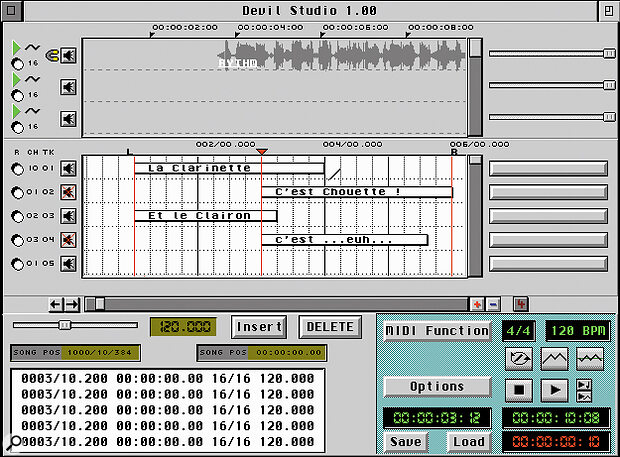 The intriguingly named Devil Studio is a new MIDI + Audio sequencer for the Atari.

Electronic Cow programs are moovin' on up, and French company Softjee have got UK distribution for their range of software. Derek Johnson checks out the Atari action.

We'll start this month's column by referring first to last month's effort. It was discovered after the column went to press that Electronic Cow's nifty Squash It! sample manipulation software will be a little more expensive than originally planned. The actual price of £79 (including UK postage, box, and A4 manual) is still hardly going to break the bank, though, and reflects the sheer number of features that the developers keep adding. One particularly nice new feature is a routine that allows audio — all the way up to a sampling rate of 48kHz — to be played back on an STFM; previously, audio playback was limited to STEs and Falcons. It looks as though other Electronic Cow software that was similarly limited in this way will be updated to include this routine; watch the Cow Net web site for more details. 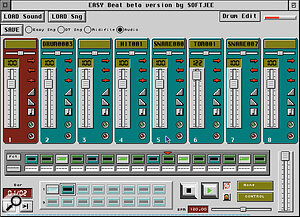 Easy Beat turns your Falcon into a virtual drum machine.

Across the channel is another software house that's active in the field of music software for the Falcon. Softjee have been plugged in this column before, but we've always pointed you to their web site or home postal address. Now you can buy domestically, since Softjee's range is now being distributed by Titan Designs. The pricing for Softjee products is as follows:

You can pay by cheque or credit card, but contact Titan for delivery costs.

Easy Beat is another piece of software for Falcon owners who wish they could run Steinberg's Rebirth RB338: it turns the computer into a virtual drum machine, complete with a set of TR909 samples. Your own sounds can be loaded, though, and there is full control (via a nifty mix window) over pitch, level and pan, plus distortion, echo and reverb effects. The sequence side of the program is pattern‑based — 16 patterns of up to 16 bars each, with 16 beats per bar — with insert, track copy, bar copy and paste editing parameters available. The software comes on two disks, one containg the program, and the other the TR909 sound bank.

Also new is Audiomid, which is claimed to be the first audio‑to‑MIDI converter for any Atari computer. The software lets you read a digital audio file and convert it to MIDI data which can be saved as a Standard MIDI File. Audiomid can also play MIDI files, display the MIDI File in a key edit mode, and display the audio file side by side with the MIDI data. UK prices have yet to be set for the new software, but watch this space.

I neglected to mention a possibly useful fact about Floppyshop's new Sounds and Stuff: The Atari Musician's Toolkit CD‑ROM last month, which is that it can be read on CD‑ROM drives running with other computer platforms. I mention this because I don't actually have a CD‑ROM drive permanently attached to my Atari, but I do have an Apple Mac with a drive built in. All I need to do to get the software (none of which is archived) across to my ST is format a double‑density 720k DOS disk in the Mac (ST‑formatted disks are sometimes rejected by Macs), copy the files to it, stick the disk in my Atari's drive and run the software. This is also what I do with software downloaded from the Internet, since I don't use a modem with the ST either. And remember, this CD‑ROM is very affordable at £25 plus £2 UK postage, from Floppyshop (+44 (0)1224 312756).