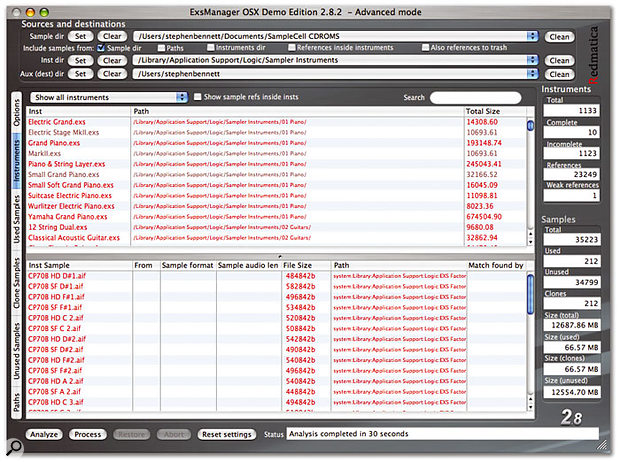 More tips and news from the world of Apple Logic.

Although Logic is a fully featured piece of software, there will still come a time when you'll probably require some third-party software to cover the areas where Logic is lacking. Apple acknowledge this, of course, by including the Waveburner CD-authoring package with version 7. There's also a free beta version of Sound Diver, the patch librarian/editor program, from the old Emagic site at www.emagic.de — although this does need an XS key to run, precluding Logic Express users from taking advantage.

There are also a few separate third-party programs that are designed to integrate with Logic. One of these is the EXS24 Sample Manager, available from Redmatica (www.redmatica.com). It's a stand-alone software program designed to assist in keeping track of all your samples and EXS24 Instruments. It can check EXS24 Instrument dependencies and see whether any samples have gone astray or have been duplicated. The software creates a searchable database of samples and has several disk-consolidation features that help speed up loading of samples within Logic itself — if Project Manager isn't enough for you, you may want to check it out. It costs 40 or 80 Euro depending on the feature set, and there is a demo available so you can try before you buy.

Apple have announced that the replacement of defective old-style 'blue' XS keys won't be possible after the end of 2005. If you're a Logic 7 user with a blue XS key, you'll be able to replace a broken key with a new white one. However, if you're still on Logic 6 or earlier and you break your key, you'll have to upgrade to version 7 — which comes with a white key. In the past, Apple's policy on the replacement of defective keys has been unpredictable. Some users have had a free replacement after sending in the old broken key, while some have had to pay a nominal fee. As those Logic users with a blue key will be well out of any warranty period by the end of 2005, the announcement shouldn't affect too many people.

I was setting up a simple Logic system for a friend recently, which comprised an M Audio Ozone MIDI controller/USB audio interface and an Apple iBook. Installation went fine, but I did come across a problem when we tried to record some electric guitar. There was a loud buzz, which changed in intensity depending on whether the strings were touched or not. Unplugging the iBook from the mains and running on battery power helped reduce the buzz. The next hour was spent in fruitless re-plugging of mains leads as I tried, without even the aid of a Hobnob, to find the source of the problem.

Finally, I tried turning off the Linksys wireless network router (which was in the same room) and the buzz disappeared. I know that badly shielded guitars (yes, Stratocaster, I'm talking to you) are susceptible to interference from TVs, but I hadn't previously considered wireless networking as being a potential problem. So if you're plagued with strange interferences you could try switching off wireless networking first, before you get down and dirty with the cables and mains sockets!

You probably realise by now that you can copy plug-in effects between tracks and insert slots using the hand tool in the Track Mixer window. What you may not realise is that you can also drag plug-ins in the Arrange page's channel strip by dragging while holding down the Apple key — of course, you can only drag plug-ins between insert slots here, as there's only one channel shown!

If you have a lot of tracks in your Arrange window, the Track Mixer can become unwieldy, forcing you into a lot of scrolling to find the tracks you want. If you create an empty Folder in the Arrange page, open it and create copies of the Tracks which the backing vocals are on, for example, double-clicking this Folder will show just these Tracks in the Track Mixer. You can repeat this for groups of drum tracks, guitars, and so on. You must make sure the Track Mixer's Link mode is on for this to work, though.