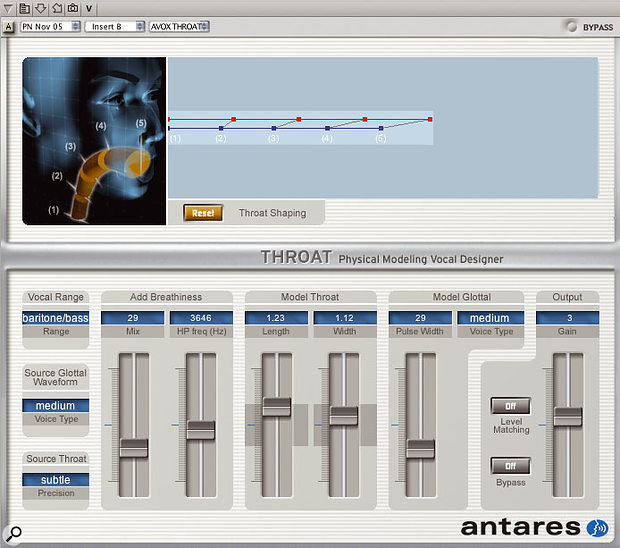 Throat, from Antares' new AVOX plug-in bundle. At around the £400 mark, AVOX isn't cheap, but it does things that would be hard to achieve by other methods.

We've got news of some interesting new plug-ins this month, and the solution to one of those software compatibility problems that can drive you bananas...

The partnership of Digital Performer and Reason, linked via Rewire, is a powerful one, and might be all you need to produce your masterworks. There's an annoying flaw in the setup, however, that can wreak havoc if you're not expecting it, and is irritating even if you are. It's this: adjusting parameters on a Reason device can sometimes cause parameters on other devices to change without warning. There you are tweaking your Subtractor and meanwhile an NNXT is going haywire. What's happening?

The Curse Of The Restless Parameters

When you adjust a parameter on a device in Reason, it produces MIDI continuous controller data that is transmitted over the Rewire link to DP. This is a good thing, as it means you can move Reason knobs and sliders and have the MIDI data associated with that recorded in DP. You can effectively 'automate' Reason device parameters without having to mess around with Reason 's own automation scheme side by side with your DP sequence.

However, the Reason/DP combo doesn't do this quite as intelligently as you'd expect — DP can't identify which Reason device is the source of the CC data, so an entire Reason rack becomes a kind of 'monster' continuous controller data source. If you have a record-enabled MIDI track in DP driving a Reason device, switching to Reason and adjusting a parameter on any device in the rack will cause the CC data associated with that to be 'reflected' back to the device that the DP MIDI track is driving. The situation apparently gets more chaotic the more devices you have in your Reason rack. Fortunately, there are solutions.

Antares Get Vocal With New Toolkit

Antares, traditionally one of the most DP-friendly third-party developers, seem to have experienced something of a renaissance recently. There's a new logo, a new website and an interesting new plug-in bundle called AVOX — the Antares Vocal Toolkit.

Although Antares' days of plug-in development in DP 's native MAS format are gone, the Audio Unit versions they produce work beautifully, at least in the latest versions of DP, so there's no problem with compatibility and reliability, and the five AVOX plug-ins bear this out.

Possibly the most unusual is Throat, which takes a vocal or instrument input and actually remodels it as if it were being produced by another human throat. You can dial in subtle character changes, or make otherwise great singers sound ridiculous, and surprisingly realistic breathiness can be added. It even made my vocals sound OK. Duo and Choir add one or more 'phantom' vocalists to a single vocal line, for instant double-tracking or multitracking effects. Punch looks like a compressor, but is no doubt rather more complicated, and adds bite and impact to vocals. Finally, Sybil is a smart de-esser.

Can We Fix It?

First, and simplest, this behaviour will never happen when there are no record-enabled tracks in DP, so remembering to disable recording before tweaking Reason devices could restore sanity. This isn't bombproof, though — sometimes you'll need to tweak one Reason synth while playing another live, and that will cause problems.

Another idea is to turn off DP 's 'MIDI Patch Thru in Background' feature (in the MIDI Solo and Patch Thru pane of the Preferences window), but this means that you can never play (live) any Reason device from DP while tweaking its parameters on screen.

Possibly the best solution is to turn on Multirecord in DP 's Studio menu. If you then choose your master keyboard as the MIDI input for your record-enabled tracks, DP will never 'hear' the unwanted Reason CCs. You can then play the Reason device when DP is in the background and tweak other devices' parameters without conflict. Success! Or is it?

If there's a downside, it's that you can't record your master keyboard and Reason-generated CCs at the same time, but I doubt many people do that anyway. In any case, you could achieve it in another way, by simply creating another MIDI track in DP, setting its MIDI input to the Reason device whose CCs you want to record, and recording MIDI notes on one track and CCs on the other. You could later merge these, if desired, or keep them separate and live with having a 'notes' track and a 'controller' track for one device.