We round up a month of small, yet interesting, product releases from Apple, as well as looking at how the company is making it easy for Linux developers to port audio software to Mac OS X.

While Apple withdrew from presenting the usual keynote for the recent Paris Mac Expo, where last year they announced the iMac G5, there's been no lack of interesting Apple product news over the last month. Apple CEO Steve Jobs and Senior Vice President of Worldwide Product Marketing Phil Schiller held a media conference at the Paris Expo and, among the topics discussed, Jobs confirmed that the company was on track to have Intel-based Macs available in June 2006. Jobs also spoke about the iPod and Apple's digital music initiative, discussing many of Apple's product announcements of the preceding couple of weeks.

Towards the end of August, news reports indicated that Apple planned to buy as much as 40 percent of Samsung's NAND flash-memory output for the second half of 2005, to use in a new flash-based iPod Mini. However, this new flash-based iPod turned out to be the iPod Nano, which replaces the now discontinued Mini, and is possibly the most seductive iPod Apple has ever released. If you haven't seen one already, you're not going to believe how small the Nano actually is. Measuring just 3.5 by 1.6 inches and only 0.27 inches deep, it really is a marvel of design, weighing just 1.5 ounces and featuring a clear 1.5-inch colour LCD screen that can also be used to view photos.

The iPod Nano is pretty much functionally identical to the iPod, featuring the same click wheel for control; the big difference is that the Nano only supports USB, while the iPod can be connected via Firewire or USB. The Nano is charged through the USB port, although a separate charger is available, and takes three hours for a full charge or 1.5 hours for a fast charge to 80-percent capacity. Apple say that the battery lasts for 14 hours of music playback, or four hours of slideshows with music, and in the case of the Nanos I've seen this is fairly accurate. The iPod Nano also seems to be pretty durable, and if you didn't see the review on Ars Technica (http://arstechnica.com/ reviews/ hardware/nano.ars/3), it's able to withstand drops from various heights and being run over by a car!

In terms of expansion, the iPod Nano features the same 30-pin connector as the iPod and iPod Mini, making it compatible with a wide range of third-party accessories. Apple also supply a curious 'Dock Adaptor' that actually has no use whatsoever right now. According to Apple, some iPod accessories are designed around specific iPod dimensions, but since iPods vary in size (and this presumes that Apple intend to offer other different-sized iPods in the future), third-party manufacturers have to offer different models for different iPods. In the future, accessories will be designed to accommodate Dock Adaptors, so that a single model is compatible with all iPods.

The iPod Nano is available in 2GB or 4GB capacities for £139 and £179 respectively, in black or white. At the time of writing, in the USA the 4GB black model seems to the most sought-after . But I have to offer this warning: to see one is to want one. I guess the remaining question, if Apple's marketing and naming strategy holds true, is when we're likely to see a Mac Nano!

September brought an update to Apple's Xserve RAID storage system, which now supports up to 14 x 500GB ATA Apple Drive Modules (ADM) for a total of 7TB of storage (previously the highest capacity of each ADM was 400GB). Xserve RAID is available in three standard configurations, with either 2TB storage across four 250GB ADMs for £4349, 3.5TB on seven 500GB ADMs for £6149, or a fully expanded 14 x 500GB ADM system for £9399.

Stay tuned for a future Apple Notes column where we'll be taking a look at the Xserve RAID's suitability for running music and audio applications such as Logic and Pro Tools.

I Just Called To Say iTunes You...

The iPod Nano was announced on September 7th at another special music event organised by Apple, where Steve Jobs also publicised the release of the anticipated iTunes-compatible mobile phone. The Motorola ROKR is the result of a collaboration between Apple, Motorola and Cingular (the last being the largest mobile phone carrier in the US). Despite this US-centric alliance, the ROKR should also be available in the UK by the time you read this column. 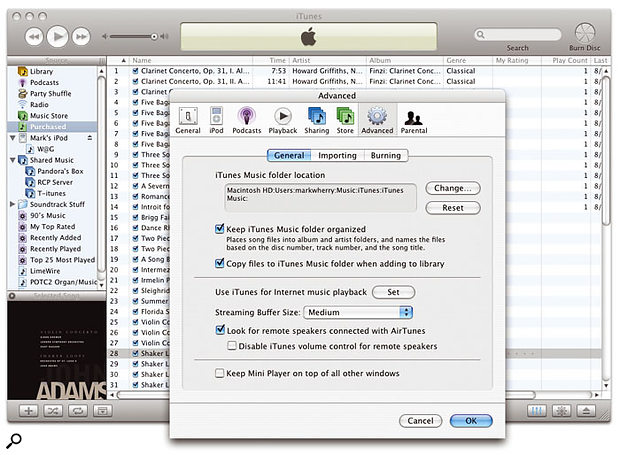 iTunes 5 features a redesigned interface. The ability to organise playlists into folders will be welcomed by many users.

The ROKR features a colour display with a user interface similar to the iPod, allowing you to view album art, and has built-in stereo speakers and stereo headphones that also function as a headset and microphone for hands-free calls. The phone connects to the computer via USB and is functionally similar to the iPod Shuffle, in that you can either fill it manually or have iTunes automatically load your favourites. Motorola claim that the ROKR can store around 100 songs (based on four minutes per song at 128kbs AAC encoding), and automatically pauses the music when you receive a call.

iTunes 5 was also released at Apple's special music event and features a redesigned user interface, a new search facility, the ability to create folders for your playlists, and Smart Shuffle, which lets you adjust the 'random' way in which iTunes shuffles your music. After installing iTunes 5 on my 2.7GHz G5, I was initially dismayed to see that the application could cause a kernel panic and bring down the whole system when I tried to rip an audio CD. Fortunately, this issue was resolved after I installed the subsequent 5.0.1 update: Apple's release notes mentioned that "iTunes 5.0.1 features several stability improvements over iTunes 5." No kidding!

.Mac To The Max

As mentioned at the start of this column, there was no Apple keynote speech at this year's Paris Mac Expo, but the company did use the show to announce what it terms as "major enhancements" to the .Mac service.

Dot-Mac (which is how you pronounce it) started life as the free iTools service (remember when a mac.com address was free?). The name change and the £68.99 per year subscription fee was introduced, along with some new services, after the July 2002 Macworld New York show. Users now get 1GB of storage as standard (up from 250MB) for email and iDisk usage, although it's still possible to purchase additional storage space if you need it, for an annual charge of £34.99 ($49) per gigabyte. Apple also introduced version 3 of the .Mac Backup software, which has been redesigned and now makes it easy to back up iLife content, purchased music and your home folder, while the new .Mac Groups is a new way to create online communities and share data. For day-to-day Mac life, .Mac is worth the yearly subscription to me personally, if only because I can have multiple Macs (and a web-based interface) synchronised to the same email account, along with calendars and so on.

Despite the 'general use' nature of .Mac, there are a couple of features that will be of interest to musicians, most notably the fact that you can download the Garage Band Jam Packs for no additional charge from your iDisk (once you're a paying member), assuming that you have enough bandwidth. And in the .Mac Learning Center there's a growing collection of tutorials for Apple's iLife and pro applications such as Garage Band 2.

As Mac OS X is built on the Berkeley Software Distribution (BSD) of UNIX, under the bonnet Apple's operating system shares much functional similarity with other UNIX-like operating systems, such as Linux. It's this similarity that makes it relatively easy to port Linux software to Mac OS X, and a good example of this is the Jack audio connection kit (www.jackosx.com) discussed in October 2004's Apple Notes by Daniel James, which was originally developed for Linux and allows you to route audio between multiple applications running simultaneously. 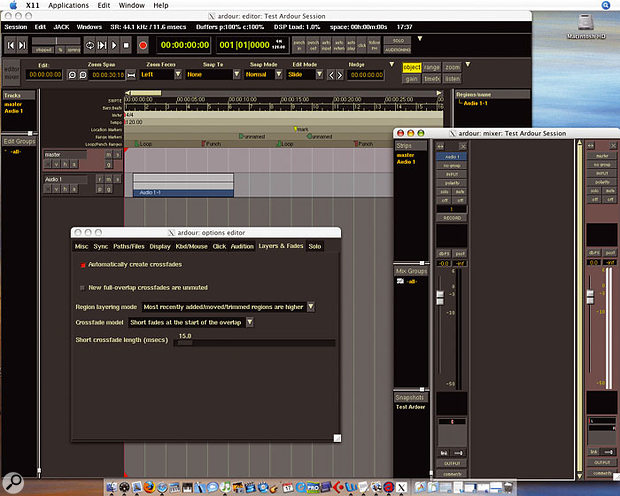 Thanks to Apple's X11 window manager, it's easier for developers to port applications from other UNIX-based or influenced operating systems that use the X Window System for their user interface. Here you can see a build of the popular open-source Linux digital audio workstation Ardour running on Mac OS X.

In order to encourage programmers of UNIX and UNIX-like operating systems to port their applications to Mac OS X, Apple made available a public beta of an X Window System implementation at around the time of Jaguar. This effectively allows X-compatible applications to be recompiled for Mac OS X with fewer tweaks than would be necessary if one were writing a native Aqua user interface. (Since the public beta, Apple's X11 has been supplied with OS X, but is not usually installed by default. To install X11 under Tiger, for example, run the Optional Installs application, located on the root of your Tiger DVD, navigate through the first pages of the installer and licence agreement, select X11 when you get the Custom Install window, and click Install. The X11 application itself will be placed in the Applications/Utilities folder.)

A positive upshot of this move, especially in the world of open-source software, is that it makes it relatively easy for developers to port more Linux applications to Mac OS X. An interesting example of this is Ardour, which is perhaps the most prominent digital audio workstation in the world of Linux audio software and is written by Paul Davis, the main author behind Jack. The use of Jack here is important because Ardour itself doesn't need to know anything about Core Audio, since Ardour uses Jack for audio I/O the same way as it would on Linux. Like X11, this really does facilitate more collaboration between developers of Linux and Mac OS X audio software.

In order to run Ardour, you need to install X11 and Jack (see the previously mentioned Apple Notes column or Jack 's web site for more information), and you can download the latest Ardour beta from www.ardour.org/download.php. As mentioned on Ardour 's web site, you may need to run Jack Pilot (a tool included with Jack) before running Ardour, to start the Jack server.