Now that Dimension Pro is included with Sonar 8, it's time to investigate how to exploit it beyond the usual sample‑playback functions. 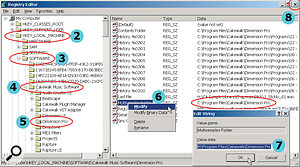 You can point Dimension Pro to a different Multisamples folder using the registry. The numbers superimposed on the screen shot correspond to the steps listed below.

Dimension Pro was Cakewalk's first instrument made for the Mac as well as Windows, and the first instrument to be available separately, and not just bundled with other Cakewalk products. Now the full version comes as standard with Sonar 8, which not only adds value to the Sonar package, but will surely introduce a new group of users to this very useful instrument.

Dimension Pro is basically a sample‑playback engine with a decent amount of synthesis flexibility. It has four 'Elements', which can be split and layered, and although it's multitimbral, it's only four‑part multitimbral, so it's not exactly a 16‑channel 'workstation' like IK's SampleTank or NI's Kontakt. On the other hand, its CPU efficiency is excellent, so opening up multiple instances is generally not a problem.

But, you may be saying, Dimension Pro has no audio input — and you're quite right, which is too bad, because the synth's LoFi, Filter, and Drive effects are just begging to abuse some unsuspecting waveform. However, there is a workaround. Dimension Pro's oscillator can accept long WAV or AIFF files, even entire tracks, and the files can be mono or stereo. I've yet to find a limit to how big a file it can accept. To process a Sonar track with Dimension Pro's facilities, proceed as follows:

1. If the audio track you want to process consists of multiple clips, first bounce them together into a single track. If the first clip doesn't start at the beginning of the project, extend its beginning (click the clip's left edge, and drag to the left). Doing this makes an easily‑defined start point. Select all clips, then go Edit > Bounce to Clip(s). All the clips are now one long track.

2. Choose the Dimension Pro Element you want to load the track into, then right‑click on its Element‑select button. Choose Reset Element to start off with a clean slate.

3. Drag the clip you created in step one from the track view into the synth's Load Multisample window.

4. Enter a C5 note in the MIDI track driving Dimension Pro, and extend it for the length of the track.

Now, when you start playback, Dimension Pro will play back the track (make sure the original track is muted), and you can go nuts with the processing. However, there is an extra point to bear in mind: to use the DSP processing (anything that's not an effect), you need to enable any processing you want to use before you begin playback. If you want to turn on, say, LoFi or Drive in the middle of playback, you have to re‑trigger the note first. As long as the desired processors are 'on', though, you can automate them and any control manipulation will play back properly as automation data. The effect options (chorus, delay, and so on) can be turned on at any time.

As a variation on this kind of processing, here's how to get a nice, organic flanging sound. The principle is the same as the previous example. First, reset two Dimension Pro Elements, and drag the same track into each Element. In one of the Elements, click on the Pitch button and set the LFO status to On. Start with an LFO frequency of around 0.15 and an LFO depth of around 20, then adjust for the desired flanging effect. Try a triangle or sine wave as the LFO waveform. If you want to make the flanging effect permanent, bounce the Dimension Pro output to an audio track.

The oscillator in a Dimension Pro Element has two main playback modes. In my previous example of using a Sonar track as the sound source, Dimension Pro's oscillator serves as a standard sample‑playback engine for a WAV or AIFF file. However, you can also load an SFZ file into an Element. The open‑standard SFZ file format (which is a simple text file that 'points' to samples) defines how multisamples should be played with respect to split points, layers, tuning, level, and so on. The Sonar workshop in the April 2008 issue of SOS gives a full description of SFZ files and how to create them.

A Dimension Pro oscillator can also play back wavetables, single‑cycle audio files that are shorter than 4000 samples. When you load this kind of short sample, Dimension Pro creates all the transpositions necessary to play that single cycle back over the entire keyboard range, and does so with minimal aliasing. Wavetables are ideal for emulating analogue synthesis, and early digital synthesizers such as the PPG Wave and Ensoniq SQ80.

The two types of oscillators mentioned above create Sound programs, but Dimension Pro also comes with Groove programs, which are loops that can be time‑stretched and transposed. They work in the same way as REX files, which we'll cover next.

Sonar 8 isn't short of ways to play back REX files, but Dimension Pro is particularly good at the job. To play a REX file, first reset an Element, then drag the REX file into the Load Multisample window. A Note symbol (an eighth note tied with a 16th note) appears toward the right of the window. You can drag this into a MIDI track driving Dimension Pro to trigger slices of the REX file, as well as turning it into a MIDI Groove Clip so you can 'roll out' as many iterations as you want. On your keyboard, C3 plays back the entire REX file. If you lift your finger off the key the file stops playing, while if you hold your finger on the key, the file will play through to the end (it doesn't keep looping). You can transpose the file pitch, with the tempo staying consistent, over the range of C2 to B3. Starting upward from C4, the keyboard keys play individual REX slices. You can also transpose the REX file's 'root' note using Dimension Pro's Transpose parameter.

Any DSP processing (LoFi, Filter, Drive, EQ, and so on) and effects will affect the entire file, but envelopes affect each individual slice, which is pretty useful. For example, you can use the Amplitude envelope to set a very short, percussive decay for each slice. A very cool aspect of using Dimension Pro as a REX file player is that you can take advantage of its multitimbral mode to assign Elements 1‑4 to MIDI channels 1‑4. To do this, click on the Options button and select Set Program as Multitimbral. 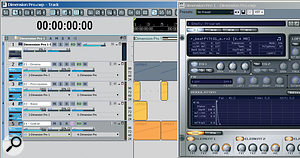 Dimension Pro is in multitimbral mode, and each Element contains a REX file. In Sonar, four MIDI tracks containing the MIDI components of the REX files drive Dimension Pro channels 1‑4. And yes, I did load a Dr: REX track icon into the MIDI tracks!

Now you can load separate REX files into each Element, drag each Element's Note symbol icon to its own MIDI track, and run four REX files at once — an entire rhythm section, for example, with drums, percussion, bass and a guitar riff. And, of course, you can automate volume, panning, and so on with Dimension Pro, so that you can do a 'remix' of the REX files. It's also worth noting that you can edit the MIDI files to jumble up the slices in various ways, and that moving the mod wheel reverses the individual slices, for 'backwards audio' effects.

As mentioned earlier, Dimension Pro's native method for handling multisamples is the SFZ file format. However, for some people the process of creating an SFZ file is intimidating. As an alternative, you can use Dimension Pro's four elements to create up to a four‑way multisample. I should add here that the synth's audio engine is something special. I find I can often stretch a single sample over the full keyboard range and subjectively it sounds fine, though maybe not as accurate as a multisampled instrument, where the high notes have different timbres than the low ones.

As an example, I sampled a Chapman Stick at four pitches (D3, E4, F#5, and F#6), then looped them (in Sound Forge). Here's how you would use those samples to create a multisample within Dimension Pro.

1. Drag each sample into its own Element.

2. Edit each Element's Shift parameter so that each sample plays back at the correct pitch when you play a keyboard key. For example, the shift amounts for D3, E4, F#5, and F#6 are 22, 8, ‑6, and –18 respectively. Once shifted, if you play a key, you should hear all Elements playing at the same pitch.

3. Now let's map them. The object is to set split points using each Element's Lo/Hi Key parameter, so that each sample covers a particular range of the keyboard.

The above is the 'classic' way to do mapping, but another option is to double samples over particular ranges. This does two things: thickens the sound (a bit of detuning adds some nice chorusing) and evens out timbral variations. Here's the mapping you'd use to create this effect.

Once the samples are mapped, you can make tweaks, such as fine‑tuning if the samples are slightly out of tune, using keyboard tracking on the filter to alter high‑frequency response (for example, less treble as you play higher up on the keyboard), and so on. Another nice trick that you can use with multisampling is adding separate amounts of reverb to the different samples — light reverb on the lower samples to avoid muddiness, for example, and more reverb on the higher samples.

You can also use either of the above mapping methods with the SFZ format, and load that into a single Element. However, you then lose the flexibility to process each sample individually.

Dimension Pro has a good‑sized library folder of Multisamples, amounting to around 9GB. This folder location defaults to C:/Program Files/Cakewalk/Dimension Pro, but I prefer to keep large sample libraries off my root drive. I installed a TeraByte eSATA drive inside my computer to dedicate solely to samples, and I wanted to put the Dimension Pro library there as well.

Dimension Pro has a registry entry that tells it where to look for the Multisamples folder. If you're worried by the idea of modifying the registry, don't proceed — or at least back it up before doing it, because if you screw it up your computer could be in trouble. But bear in mind that the registry isn't really that scary a place if you take your time and double‑check your work. Here's how to modify it. 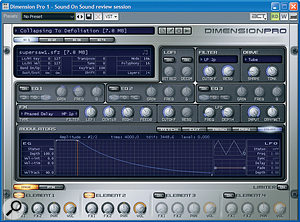 2. In the left pane, unfold the HKEY_Local_Machine key.

3. Unfold the Software key under HKEY_Local_Machine.

5. Click on the Dimension Pro folder and several data types appear in the right pane.

7. Enter the new file path for the Multisamples folder, then click on OK.

To make sure all went smoothly, open Dimension Pro to verify that you can load its programs.

If you click on the 'Give All Keystrokes to Plug‑In' button in Dimension Pro's upper right corner, then click on any Element button, you can select the other Elements with the QWERTY keyboard number keys (1 = Element 1, 2 = Element 2, and so on). Also, if you click on one of the Modulation buttons, the number keys can be used to switch between the various modulation options (1 = Pitch, 2 = Cutoff, 3 = Resonance, 4 = Pan, 5 = Amp). Note that the numeric keypad number keys do not work for this.