Fix It In The R-Mix Skip to main content

Fix It In The R-Mix

Using R-Mix in Sonar opens up a world of cool EQ tricks.

Sonar's R-Mix VST plug-in is a DAW-optimised version of Roland's R-Mix software, which isolates audio based on frequency range and stereo positioning (for example, a hi-hat panned left, or bass panned towards the centre). It recalls the 'spectral view' in Adobe Audition, but is designed more for musical applications than surgical editing.

There's a misconception that the Sonar version is limited compared to the full version, but the only elements that were removed have no relevance in the context of a DAW. For example, there's no need for built-in WAV recording (after all, if you haven't figured out that Sonar can record audio, you probably shouldn't be reading this column!). Nor is there time-stretching and pitch-shifting, as Sonar already knows how to do that. However, note that, unlike many Cakewalk VST plug-ins, other programs cannot load R-Mix; it's licensed for use only with Sonar X2 and above.

You can't necessarily edit sounds with pinpoint precision without hearing artifacts, but much depends on the program material and how experienced you are in using R-Mix. Sometimes R-Mix works perfectly, sometimes not. The bottom line is that if you expect it to be a miracle worker, you'll probably be disappointed — until the first time it works a miracle for you.

R-Mix is intended for processing stereo files. You can still isolate frequency ranges with mono, but can't isolate within a stereo field, which can be important. (This is true even if you convert mono to 'stereo', but the left and right channels are identical.)

The heart of the program is the 'harmonic placement' window, a display that deconstructs the audio into coloured 'clouds' showing frequency, panning and amplitude. The cloud's colour indicates amplitude (black for quieter and white for louder; colours indicate in-between gradations). Higher frequencies are higher up in the window, lower frequencies are lower down, and stereo placement is mapped from left to right.

Colours and positioning indicate levels, frequency and panning in the R-Mix display. The red rectangle defines a frame, which contains the range of frequencies in the stereo field that will be processed. In this case, a kick drum is within the frame.

To give an example, a round, white element in the window's bottom centre that hits briefly and rhythmically is probably the kick drum. A yellow, elongated element located higher up and towards the left is likely to be a hi-hat. A consistently loud, centred, mid-range collection of elements is almost certainly the vocal.

The way you use this information is by delineating a frame, indicated with a red outline, which you can adjust to isolate a specific frequency range and stereo position. The frame can be either rectangular/square or circular/oval, as chosen by a Shape switch. You can define the frame size by grabbing any of its vertical or horizontal lines (or a corner) and dragging.

Of course, this isolation can't be perfect when working with a mixed track. If you're isolating something like a vocal and another instrument covers the same frequency range in the same stereo position, you'll process part of the other instrument too. As a result, the accuracy with which you draw the frame, and how well you can isolate only the section to be processed, greatly influences R-Mix's overall effectiveness; it takes some practice to learn how best to draw a frame to obtain the desired results.

The Inside Level within the frame has now been reduced to -60dB, essentially eliminating the kick.

In practice, though, I was surprised at the potential of framing for accuracy. In one song, a vocal was panned to centre and another was slightly off centre in the same frequency range. I thought they'd be panned too closely together to be able to process one without the other, but drawing a very narrow frame allowed me to add reverb to only the desired vocal. It was almost like reaching inside the original multitrack to add the new vocal reverb. I was also able to remove the kick drum from a loop, making it easy to add a new kick to the loop when it was used in a DJ mix that wasn't compatible with the original kick pattern. (Note: As you have to hear these sounds to believe them, there are audio examples of both of these R-Mix edits at /sos/sep13/articles/sonar-notes-media.htm.) 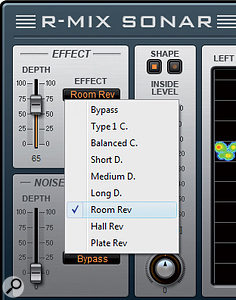 Several effects are included that allow processing of what's defined by the frame. In this example, reverb is being added to the 'framed' audio. 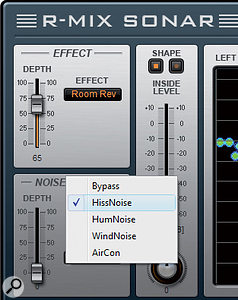 Additional effects include four noise-reduction algorithms, for hiss, hum, wind noise and air conditioning, that are independent of the frame; they affect all the audio. These algorithms aren't on the same level as something like iZotope's RX2, but they're fun for sound design, and the hiss-reduction algorithm can be fairly effective with cassettes.

The R-Mix control set isn't all that complicated; this processor is all about applications, such as...

R-Mix is arguably more of a creative tool than a problem-solver, although it certainly is capable of solving problems. Just remember that it takes practice to get good at 'R-Mixing': the more you use it, the better you'll be able to exploit it.