GarageBand is perhaps the most successful entry-level music software ever created, and this month we take a closer look at the latest version supplied with iLife '08. 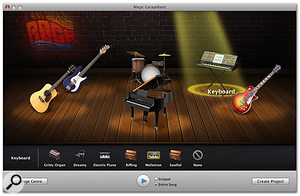 Magic GarageBand provides a back-room club environment for you to choose what instruments you want in your band. I guess it's a sign of the times that adding even virtual cigarette smoke to this image would probably be illegal...For those who remember Logic in the days before Apple acquired Emagic, it's funny to think that every Mac sold in the last four and a half years has effectively included a version of this popular sequencer, in the form of GarageBand. And while some have disdain for the facile nature of the software, there's no doubt that it has been successful at introducing more people to computer-based music-making. One image that's always stuck in my mind is seeing a six or seven year-old kid in an Apple Store playing with a Mac running GarageBand.

Although music software companies, including Emagic, had offered junior versions of professional products in the past, these were usually created by stripping down the functionality of a flagship application while keeping the basic concepts largely intact. What Apple did so successfully with GarageBand was to keep the technology behind Logic, but build a completely new user experience that really makes the process of creating music on a computer easier.

GarageBand '08 is perhaps the most significant update to GarageBand so far, and it's good to see that the focus has returned to musical tools, as opposed to the Podcasting or iMovie-oriented features added in GarageBand 3. It's also interesting to note that GarageBand '08 caters for different musical skill levels, with new functionality to make it even easier for beginners to get started, but some more advanced features for experienced users.

GarageBand '08 even shares a couple of features with the new Logic 8, such as the improved take management, where you can select different takes of a region from a pop-up menu. Although it still doesn't feature the full Quick Swipe comping feature, you can chop up regions and choose alternative takes from these edited sections, making one wish that take management was this simple in other, more powerful audio workstation software.

For complete beginners there's a new feature called Magic GarageBand, which is basically a way to build a backing track very quickly, by choosing a musical style and the instruments you want to include in the arrangement. Magic GarageBand offers eight built-in styles, and once you've chosen a style you can click the Audition button and the virtual on-screen curtains will be drawn back to reveal a back-room club stage, where you can select what instruments play in the five main band roles (guitar, bass, drums, keyboard, melody). You can select a role by setting the spotlight on that role's stage position, and Magic GarageBand will give you a choice of instruments that can perform that role, or you can select none if you want to produce a smaller arrangement.

GarageBand '08 even offers Logic 8-style take management.A sixth, 'My Instrument' role is reserved at the front of the stage for you to choose an instrument to perform with the band, although you can't actually play along with the preview, as this track is only created once you're happy with the arrangement and you click Create Project, to have Magic GarageBand build the preview into a normal project

Once you have a song in GarageBand, you can use the new Arrange Track, which lets you easily change the order of sections in your project. First you need to define the sections in the project — verse, chorus, and so on — as Arrange Regions in the Arrange Track. These Arrange Regions can be renamed and resized, but the real power comes from simply dragging them around the timeline.

Say you have a simple project with four Arrange Regions: introduction, verse, chorus, and ending. If you want to have the chorus part before the verse, you drag the chorus Arrange Region back in time. As you do this, the other Arrange Regions will shuffle around so you can indeed drop the chorus Arrange Region before the verse. The point here is that any software- or audio-instrument regions between the start and end points of the Arrange Region you're moving get moved as well. This is a slightly different way of implementing a feature like Cubase's Play Order Track (called the Arranger in Steinberg's Sequel entry-level music package) and while it's not quite as flexible, in that you can't define multiple arrangements in the same project, it's perhaps a quicker and easier way to rearrange a single version of the project.

Tempo can now be automated as a parameter of the Master Track, and a new Project LCD mode enables you to see the current key, tempo and time-signature values for the project. One particularly welcome feature in GarageBand '08 is the ability to create tempo changes, and this has been implemented as part of a much larger overhaul that adds more flexible automation to the program. While you could automate a track's volume and pan controls, and the Master Track's volume and pitch settings, in previous versions of GarageBand, GarageBand '08 adds tempo automation to the Master Track and the ability to automate any instrument or effect parameter for a track. The only slight problem with the new automation options is that you now really start to wish that tracks were resizeable, so you could work with automation more clearly. For now, though, the Shift key is your friend — especially when automating tempo — as it allows you to make more precise adjustments while dragging the mouse to adjust a value.

Although you can now automate tempo in GarageBand, you still can't create time-signature changes. While I can see why this might be deemed a 'complicated' feature for beginners, I do think it would be useful to have for hardcore GarageBand users (before they upgrade to something like Logic Express), or professional users who might just be trying out some ideas because they happen to have GarageBand to hand. On the plus side, though, the transport LCD has been revamped in GarageBand '08, with an additional mode for Project that shows the current time signature. What's great about this is that you can now choose a new time signature from a pop-up menu, where previously you couldn't change the signature once the project had been created.

The down side to having tempo displayed in a separate LCD mode is that now you can't see the current tempo alongside the bars and beats 'Measures' LCD mode, as in previous GarageBand releases, which I think is a bit of a shame. While it might add a little visual clutter, the parameters shown in the Project LCD mode should really be displayed separately, so they're always visible.

GarageBand 2 implemented basic notation editing, and GarageBand '08 takes this one stage further by adding basic score printing. When you're editing a region in the notation view, you can simply select Print from the File menu and GarageBand will produce a printed score, complete with title, tempo marking, instrument name and composer (taken from the new My Info page of the Preferences window). Only one instrument part can be printed at a time, so you can't print a full score, but this should be fine for most GarageBand users.

Although you can't add any symbols to your score, which I think would be a nice touch for the next version, you can now change the stave and clef setup for an instrument by hovering the mouse over the clef and choosing treble, bass, or treble and bass clefs from the pop-up menu. This means that not every instrument has to be displayed on a piano-style pair of staves, which is great if you want to print out a simple flute part that only needs a single treble clef. It would be nice to have a bit more control over how the piano-style staves split notes between the treble and bass, but I appreciate that this might be beyond the simplified intentions of the feature.

GarageBand '08 also includes a new Visual EQ effect, so-called because it provides a visual representation of the EQ curve for you to manipulate, rather than the 'list of sliders' approach used by the other effects and instruments. Logic users will recognise the similarity to Logic's Channel EQ effect, and GarageBand's Visual EQ interface offers Channel EQ's built-in spectrum analyser as well.

GarageBand really is a neat application, and possibly the most user-friendly audio and MIDI sequencer ever designed. When you think of all the functionality on offer, especially with the new features included in GarageBand '08, it's astonishing that such an application comes free with every Mac, or will cost you just £55 if you upgrade to the latest version of iLife. It's also worth noting that GarageBand '08's look and feel is significantly slicker than GarageBand 3: everywhere you look, from the cleaned-up icons to the tidied-up Preferences window and the way regions

are now coloured red during recording, there are so many improvements.

Although GarageBand is aimed at entry-level users, there seems to be affection for the program amongst more experienced users as well. Perhaps this is because GarageBand comes with every Mac, so if you need access to a quick instrument, or want to sketch an idea, you know that if you have nothing with you except your Mac, GarageBand should be able to help out in a moment of inspiration. And if you get stuck, you can probably find a six or seven year-old at your local Apple Store to advise!