Get to grips with Groups in Live. 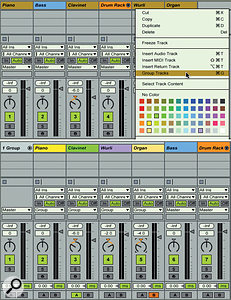 1: At the top, four keyboard tracks are selected for grouping. At the bottom, the resulting Group, labelled '1 Group,' contains the keyboard tracks, whereas the Bass and Drum rack tracks remain outside of the Group.

Track grouping is one of Live's most powerful tools for managing your tracks in both Session and Arrangement view. Want to do a final mix using your hardware control surface or tablet app without continually shifting focus? Create a few track Groups, fold them to hide the individual tracks and use the Group channel strips for the final mix. Want to use the same compression and EQ on separate percussion tracks? Group them and put the compressor and EQ along with any automation on the Group track. Or maybe you want to turn your mix into a few stems for collaboration or remixing? Just group the tracks for each stem and render or resample each Group. In this article I'll cover each of these options along with several more ways Groups can make your life easier.

Creating a Group from several tracks couldn't be simpler. In either Session or Arrangement view, select the tracks you want to group (they need not be adjacent) and then choose 'Group Tracks' from either Live's Edit menu or any track's context menu (Ctrl-G or Cmd-G). The tracks will be rearranged under the banner of a new Group track named '# Group', where '#' is the position of the Group channel strip in Live's mixer. To add or remove tracks, drag them into or out of the area under the Group banner. To dissolve the Group, select it and choose 'Ungroup Tracks' from the Edit or context menu (Ctrl-Shift-G or Cmd-Shift-G). Here are several more things to keep in mind: 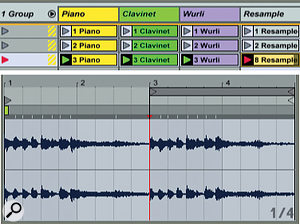 2: At the top, two-bar piano, Clavinet and Wurli parts have been grouped along with an audio track for resampling. At the bottom, two passes of the third Group Scene have been resampled to capture the tail in the second pass.

Live offers two ways to print one or more tracks to audio: Render and Resample. Some clever grouping can help you make the most of these processes. (Freezing, which is typically used as a temporary measure to reduce CPU load, is a third way to print tracks to audio, but you cannot freeze Groups.)

You can use Rendering (Ctrl-Shift-R or Cmd-Shift-R) to capture either a single output (for example, the Master track) or all outputs. In the latter case you'll get a separate audio file for each track, including one for each of your Group and Return tracks. When invoked from Arrangement view (the most common practice), Rendering captures the selected time range, or, if no time range is selected, the whole arrangement. When invoked in Session view, you specify a length, and it captures all playing session clips along with all playing arrangement tracks starting from bar one. So when you want to print a submix, first create a Group for the submix and then render only that Group in Arrangement view. If your goal is to save CPU, import the rendered audio file and either disable the devices on the tracks in the Group or drag the Group to the browser for later use and then delete it from the set.

Resampling differs from rendering in that it always captures the output of the master channel, and it operates in real time. (Rendering of a single output is typically faster than real time.) Working in real time makes it possible to resample your actions such as triggering clips and Scenes or manipulating device and channel-strip controls.

To resample, you create an audio track and set its input to 'Resampling.' When you then record on that track, either in Session or Arrangement view, its output is temporarily muted to avoid feedback, and whatever you hear in the master output is captured in a clip. So, when you want to resample only those parts of Scenes using specific tracks, create a Group holding those tracks, place the resampling audio track within the Group, and then use the Group's Launch buttons to both trigger the clips on the Group tracks and launch recording on the resampling track. A good tip to remember is when you're resampling looping clips, resample two full passes in order to capture the tail in the second pass. 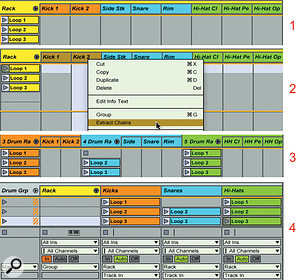 One thing that distinguishes working with MIDI drum clips is that you often want to edit kit-piece parts individually. That's easiest when you have a separate clip for each kit piece or for all kit pieces of the same type (kick drums, snares, hi-hats and so on). Having separate parts also lets you swap MIDI clips for one kit piece without affecting the others. Creating the separate MIDI clips is a little tedious although not particularly difficult: just make as many copies of the original as needed and then delete all the notes for the kit pieces you don't want in each copy.

If you're using a Live Drum rack, it's even simpler than that, and this method lets you simultaneously separate multiple MIDI drum clips. First, unfold the Drum rack in Session view and rearrange the chains by dragging them so that like kit pieces are adjacent (see screen 3). I find it easiest to colour-code the chains first. Note that moving a chain around does not affect which pad triggers it, so your drum clips will continue to play normally. Next, make a copy of the original Drum rack for later use. Now select like chains in the original Drum rack (those of the same colour, if you've coloured them) and choose 'Extract Chains' from any selected chain's context menu. For each extraction, you'll wind up with a separate Drum rack containing clips with only those notes that play pads in the rack. When you've extracted all of the kit-pieces, the original Drum rack will be empty, so delete it.

From here you could group the new Drum racks to give you a single drum Group with individual racks. That method lets you apply separate effects (EQ or compression, for example) to each Drum rack within the Group. If you don't need that, you can simplify things further by deleting the new Drum racks and then grouping the resulting MIDI tracks along with the copy you created of the original Drum rack track. After you do that, route the output of each of the MIDI tracks to the Drum rack's input. You now have only one Drum rack to deal with but you can copy, edit and trigger the kit-piece MIDI clips separately.

To finish off, here are three additional ways in which Groups come in handy:

1. If you frequently create sketches with a particular instrument configuration such as piano, bass and drums, create a Group with a track holding each of those instruments and drag it to your user library. This way, you can quickly grab it when you need it without having it clutter your default song.

3. If you use an eight-channel control surface such as the Akai APC40 or an iPad app such as Neyrinck V-Control, rearrange your set in Groups holding seven tracks each (include empty tracks as needed to ensure each Group has eight channel strips). This lets you quickly page right and left among your Groups when they are unfolded, as well as access the Group channel strips for eight Groups at a time when they are folded.