Use Sonar X2's bundled tools to master your mix.

A recent discussion in the Sonar X2 forum asked whether separating the mixing and mastering processes was still necessary, or whether simply inserting mastering-type processors in the master bus while you mixed would be sufficient. As with most topics related to audio, there's no universal answer.

The conventional reasons for making mastering a separate process are to introduce a fresh set of ears, and because assembling individual tracks into a mix is a different discipline compared to working with the final mix itself. But in the days of vinyl, mastering was a very different process for technical reasons.

Vinyl involved trade-offs. Low-frequency content and loud passages caused larger stylus excursions, so you could have lots of bass, or relatively high levels, but not both. Longer albums required narrower, lower-amplitude grooves to fit them all on the vinyl platter. Furthermore, the inner grooves were more susceptible to distortion, so softer songs often ended up last on a side where this distortion would be less noticeable. As a result, albums were typically restricted to 15-20 minutes per side for an acceptable trade-off of frequency response, level and running time.

This is why mastering engineers acquired sorcerer-like reputations: they had to know (and compensate for) vinyl's limitations, and advise the artist on the trade-offs. If someone submitted an album with a 30-minute 'A' side and 15-minute 'B' side, it was up to the mastering engineer to suggest that it might be a good idea to rearrange the song order so that side 'A' was seven minutes shorter, and shift the extra length to side 'B'.

Digital has no equivalent technical limitations, so the main technical reason for separating the mixing and mastering processes is no longer relevant. The artistic issues — having an objective set of ears, and knowing how to optimise a stereo mix — still matter, but concerning yourself with those issues, while recommended, is a matter of personal choice.

So, can't you just insert plug-ins in the master bus? It's true that much of mastering involves using EQ and dynamics processing, but that's not all there is. I'll often redraw waveforms in a DAW to tame peaks, thus gaining headroom without using dynamics processing, and I'll define particular regions within a file in order to boost or cut specific sections such as a strategic drum hit. Although, theoretically, you could accomplish much the same results with master bus automation, it's difficult to be as precise. Furthermore, some mastering processes simply work best when used offline. Noise reduction is one case in point, and while Sonar's R-Mix plug-in tries valiantly to do real-time spectral editing to eliminate artifacts like finger squeaks, breath noises, audience members coughing, and similar problems, spectral editing also works best as an offline process with appropriate programs (such as Adobe Audition). Most 'repair/salvage' work, which can be a crucial part of the mastering process, is often difficult or even impossible to do simply by employing plug-ins.

However, these are also fairly advanced techniques, and I get paid to put serious effort into mastering. But it's not always necessary to hire a professional; assuming you have a 'clean' and properly done mix, sometimes all you really do need is an optimum selection of plug-ins in the master bus if your goal is simply to enhance the mix to some extent.

Sonar's included LP-64 EQ and LP-64 multi-band (compressor) plug-ins are fairly demanding on your CPU. Try this experiment: insert a Sonitus EQ and the LP-64 EQ in the master bus, with several dB of high- and low-end boost. Set the frequency, gain, and Q settings identically, and do an A-B comparison. You'll likely find that the LP-64 plug-in handles the highs with more transparency and clarity. Now try the same experiment with some of the Pro Channel EQ types; as the Pro Channel EQ offers 'character' options, you may prefer them to the LP-64 EQ's neutral sound. In any event, you don't really need 'designer' EQs with special mojo, Sonar's are perfectly good. This isn't to minimise the value of other character EQs by companies like Universal Audio and Waves, as they can contribute a unique sound. 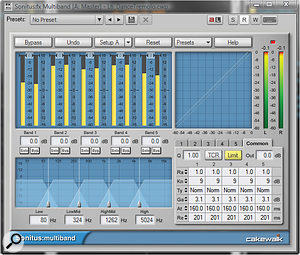 The Sonitus multi-band compressor can also serve as a multi-band limiter. Note that when the light above the output meters glows red, it doesn't indicate distortion, but rather that limiting is taking place.

When it comes to master-bus limiting, Sonar has four main options. Despite its age, the Sonitus multi-band compressor makes a decent multi-band limiter if you don't want to squash the dynamics too much. On the Common tab, set each stage for no compression by choosing a ratio of 1.0. Enable the Limit button, then click on the Gain label and drag up to increase the gain for all stages simultaneously. You should be able to push about 3dB of gain without audible damage, and up to 6dB if you're a 'make it loud!' type. What's more, you can alter the gain of individual frequency bands, which is handy if you want to limit one range more than another. (Note that the LP-64 multi-band plug-in doesn't have a limiting option; it's strictly a multi-band compressor.)

Boost 11 is another limiter, introduced originally in Sonar Home Studio, that's designed to be more of a maximiser. I'm not really a fan of it for programme material, although it has its uses for individual tracks.

Another option is the Concrete Limiter, which is an optional-at-extra-cost Pro Channel plug-in. I think it's exceptional on individual tracks, particularly drums and vocals, but as it's not a multi-band processor I prefer Waves Ultramaximizer-type plug-ins for more transparent limiting with programme material. However, if you like the sound of full-band limiting, Concrete Limiter is a good option; the Sonitus Compressor plug-in also has a limiter function that's similar to the one in its multi-band counterpart (ie. set the ratio to 1.0, and increase the Gain control until limiting occurs).

To the oft-asked question of whether mastering EQ should go before or after dynamics processing, the answer is 'yes'. Compression will tend to undo the effects of any EQ boost, but this also means you can sometimes push something like a kick drum to make it seem louder, yet not exceed the available headroom. EQ after compression will tend to sound more natural as the dynamics aren't affecting the EQ. However, if you're using a limiter on the master bus, it should be the last processor in the chain, to ensure that there's no clipping. I'll often pair this with SSL's free X-ISM metering plug-in to monitor whether there's any inter-sample distortion, and use the highest output level possible coming out of the limiter that still ensures nothing registers above -0.1dB according to the X-ISM plug-in's meters.

Here's a technique that's well suited to DAW-based mastering, and is the result of my never-ending quest to produce masters that are loud enough to please clients, but have enough dynamics to please me. The concept is similar to parallel processing for drums, where you mix compressed sound to bring up lower-level dynamics along with dry sound to provide the peaks. It involves bouncing the tracks down through significant amounts of limiting or maximising (and perhaps some high- and low-end emphasis) to create a very squashed track, then mixing this in with the other tracks as you do your 'real' mix. Here's the procedure:

When it's time to do the real mix, remove the processors from the master bus and run your mix again, but this time, bring up the track that contains your squashed 'master' a bit. The optimum level will vary; for most of my projects it ends up around -20 to -12 dB. Also, you may need to make a few tweaks to the other tracks to reflect the changes caused by adding in the parallel track. It may take several tries to get the right 'squashed' track and the right overall mix, but the results can be dramatic and satisfy both those who want a loud sound, as well as those who like dynamics and are aware that it's possible to make a song louder by turning up what's called a volume control.