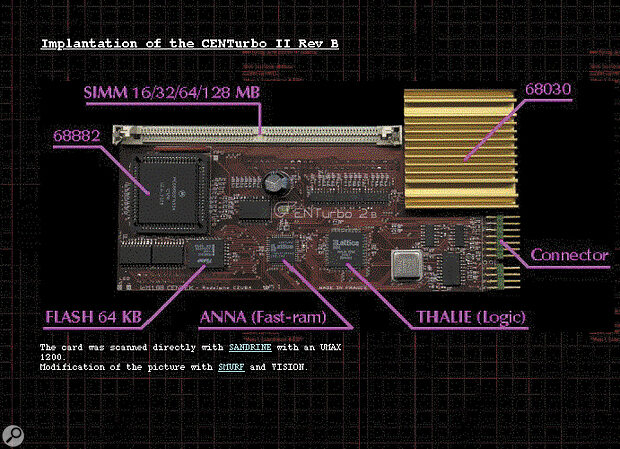 Ataris can now be picked up at very reasonable prices and, with the addition of some cost‑effective software, make useful live sequencing devices. Derek Johnson highlights this and other uses for your ST, and discusses some fast new TOS‑compatible machines from Europe.

If you're connected to the Internet, either using your Atari or some other platform, you've probably discovered the SOS discussion forum on our web site (https://web.archive.org/web/2015..." target="_blank). If you haven't, do check it out — it even has a dedicated section for Atari users to talk to each other. Recently, a visitor asked about some software he remembered from years ago that turned the ST into a MIDI file player for use in a live situation. I was immediately able to remind him of Hands On MIDI Software's On Stage, which I actually reviewed back in August 1992. A quick look in SOS's classified ads reavealed that Hands On, who are best known for their commercial MIDI Files, are still stocking On Stage (plus a handful of other Atari goodies as well). On Stage has had a couple of updates in the intervening years, now goes under the name On Stage Soft, and retails for £39.95. If you have a modem MIDI expander, such as Hands On's own £24.95 16+, On Stage Soft will be able to play back 32 independent MIDI channels.

Devices such as the 16+, which add an extra set of 16 MIDI channels, are the simplest way of upgrading the MIDI capabilities of your Atari. They'll work with Steinberg's Cubase, Emagic's Logic, Digital Muse's Virtuoso, Gajits' Breakthru Plus, Passport's Mastertracks Pro and Hollis Research's Trackman II. The full commercial release package of the latter included a MIDI expander, but if you've downloaded the free version from the Internet, something like the 16+ could come be a useful addition to your software.

Just to complete our fresh look at the Hands On catalogue, note that the company also distributes Roni Music's fab Sweet 16 sequencer (which can also offer 32 MIDI channels with the 16+). The software is now officially shareware, but if you don't have Internet access to nab it from Roni Music's web site, you can buy the full version from Hands On for £24.95. We reviewed Sweet 16 in Feburary 1994, and the last mention in this column was back in August 1997.

Also on offer from Hands On are editing packages for Roland's SC55 Sound Canvas and Yamaha's TG100 General MIDI sound modules (£14.95 each), plus a utility for converting multitrack Type 1 MIDI Files into single‑track Type 0 files — that's Zero Gen, £9.95. And we mustn't forget the £9.95 MIDI‑File‑to‑Steinberg‑Pro24 converter, which could be useful if you're still using that aged, but functional, sequencing software.

You'll have to forgive me for rambling on about the Internet for the second month in a row, and indulge me while I mention, yet again, last November's Atari Computing Convention. But one RE Golding chose the event to launch the second edition of his 120+ page Users' Guide to the Internet for Atari, and I now have a copy of the book itself. If you had any doubts about getting on line using your Atari ST or Falcon, this is the book for you. It's a home‑brew, spiral‑bound publication, but it manages to present all the relevant information in a straightforward and relatively clear manner. The book is even available with a collection of disks containing all the PD and shareware tools you need to get on line.

All aspects of life on the Web are covered in this book — including email, newsgroup access, ftp, telnet, and Internet relay chat. Web browsing advice is given at every step, from choosing a service provider and selecting the right software, to configuring and using the software. Illustrations are provided throughout. In general, the book takes a modular approach, presumably because the various bits that make up the Internet can often be better accessed one at a time with the ST — especially if you have limited RAM and no hard disk. (However, it's worth noting that the latest version of Crystal Atari Browser does integrate mail, news and web browsing in a package similar in feel to the standard Mac and PC browsers.)

The book is rounded off with some useful general information about search engines, UK ftp sites, ftp commands, Internet service providers and useful links for Atari users, much of which would be worthwhile for non‑Atari Net users. It's highly recommended, and for £9.99 (£12.99 with disks), including UK postage, good value as well. Cheques or postal orders only.

The Need for Speed

Further evidence that there's life in the Atari platform yet is provided by the variety of new, souped‑up TOS‑compatible computers that are being released. Towards the end of last year, it was Milan from Milan Computer Systems in Germany, and new for '99 is the Centek Phénix Workstation, from France. If it's speed and expandability you require, both computers have a lot to offer.

On the MIDI and audio front, there are plans to introduce a MIDI interface card, and it is reported that Falcon‑compatible sound routines have been adapted to Milan, which should be able to talk to hard‑disk recording cards directly and run cleanly written audio software. That should mean compatability with Cubase Audio Falcon.

Devices such as the 16+, which add an extra set of 16 MIDI channels, are the simplest way of upgrading the MIDI capabilities of your Atari.

Phénix, on the other hand, prides itself on not being a TOS clone, though it has TOS emulation capabilities and is based around the 68040 processor running at 36MHz. The processor can be upgraded to the 72MHz 68060, and two processors can be run side‑by‑side. The machine also features two Motorola 56301 DSP chips (with provision for three more), two DIMM sockets for up to 256Mb of RAM, and three PCI slots. Serial, parallel and MIDI interface options will all connect via a USB PCI card. The keyboard will also be USB‑compatible. Options include Zip and CD‑ROM drives, 4.3Gb hard disk, and 3D graphics cards.

The audio spec is promising: 20‑bit circuitry is on board, operating at 44.1kHz or 48kHz, with stereo ins and outs on phonos and mini‑jacks. An external DSP connector interfaces with a 19‑inch rack: the 20‑bit 'home studio' option offers 32kHz, 44.1kHz and 48kHz sample rates, four audio ins and 12 outs (on quarter‑inch jacks), plus S/PDIF sockets. The 'professional' option substitutes 24‑bit operation with a 96kHz sampling rate, XLR connectors and AES/EBU digital interfacing. These options can be further expanded by adding DSP PCI cards and more external rack expanders.

Centek are also behind the CenTurbo II Falcon accelerator; this is notable because, unlike some cheap accelerators, it won't mess up SCSI data transfers, corrupt audio or damage motherboards. It's reported to be compatible with Steinberg Cubase Audio Falcon.

Hallvard Tangeraas has contacted the SOS online discussion forum to publicise his Notator SL/Creator SL for Atari web page and mailing list. This software (by C‑Lab, now called Emagic) is still popular with users at all levels: many musicians even prefer the look and feel of the Atari software to Emagic's more recent offerings on other platforms, as well as feeling happier with the MIDI timing of the Atari in general. The intention of this web site is to offer a central forum for users of the software, and it should be an ideal starting point if you have queries, think you might be able to help others with problems, or just want to virtually hang out with like‑minded individuals.

The web site offers an extensive FAQ file, which can be read on line or downloaded for perusal later, and updaters for Notator SL v3.21 and Creator v3.1 (you need a legitimate copy of either software in order to use the updaters — software piracy is not supported by the web site!). In addition, there are fonts, help files, and C‑Lab's Explorer 32 editor/librarian for Roland's MT32, MT100, E10, E20, D5, D10, D20, D110, D50 and D550. This latter software used to be fully commercial, but has been made shareware by its author.

One last point: Hallvard apparently created his web page on an Atari STE. This guy is dedicated! Point your browser at members.forfree.at/~notator.