How To Use Logic's Modulator MIDI Plug-in 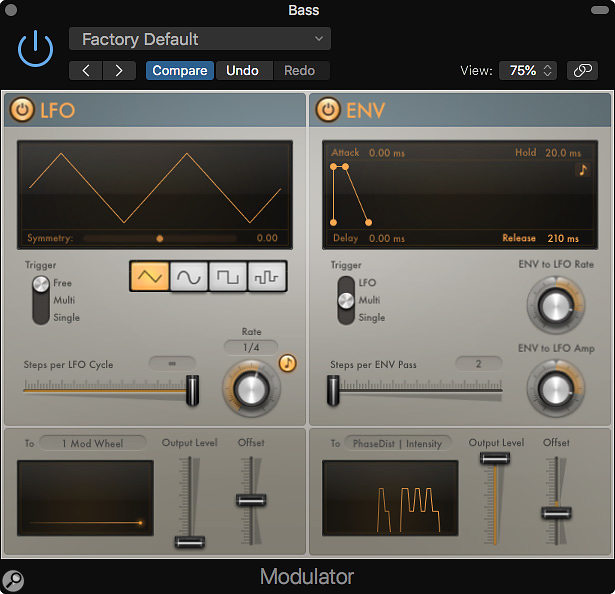 Logic's Modulator MIDI plug-in offers some exciting ways to add movement to your music. Find out how...

Other than the popular Arpeggiator, Logic's MIDI plug-ins often get overlooked — perhaps because some of them, like MIDI Note Repeater, seem just to chew up polyphony. However, others, such as the Modulator, can be immensely useful in reshaping the sound of a MIDI instrument. Being a MIDI plug-in, Modulator can only be used on MIDI tracks, but it can be used to control pretty much any parameter on any plug-in inserted below it in the same channel strip — both instrument and effect plug-in parameters — but not the channel strip controls themselves. There doesn't seem to be any way to route their output to control plug-ins in other channels or in audio channels either, which is a pity as I can envisage being able to set up some fun side-chain-style effects that way.

The way this plug-in works is that it generates MIDI data that is either free–running, or triggered by what is playing on the same MIDI track (or via a real-time MIDI input on that track). For the more adventurous there's a Scripter that enables you to create your own MIDI processing and generation scripts, but for this article the area of most interest for me is the ability to very simply assign a plug-in control to be controlled directly from the Modulator plug-in, though the ability to route the modulation directly to pitch–bend or other mainstream MIDI parameters is also very convenient. MIDI plug-ins have their own slot at the top of Instrument channel strips, directly below the EQ box, and show up in green when active.

Modulator's GUI shows an LFO section on the left and a triggered Envelope section on the right. If you need to control more than two parameters at the same time you could simply insert another Modulator or two. You can even use one instance of Modulator to control the parameters of another Modulator inserted below it, which should appeal to the modular synth guys who like to connect up stuff just to see what happens. You can't modulate MIDI plug-ins higher up the stack though — which at least avoids the possibility of runaway data feedback situations. Each of the two sides of Modulator can generate MIDI CC, aftertouch, pitch–bend messages and other common control parameters, as selected in the 'To' drop-down menu.

Modulator is essentially a tempo-sync'able or free–running LFO plus a largely independent Delay/Attack/Hold/Release envelope generator with a simple graphical interface. To add to the fun, the envelope generator can also be used to influence the LFO. Each section can control different targets.

The LFO section has a choice of sine, triangle, square and random stepped waveforms with variable steps per cycle, and control over symmetry so you can easily create Sample & Hold–style effects by sending the modulation signal, for example, to a synth's filter cutoff frequency. The Symmetry control takes the form of a thin horizontal slider with an orange knob at the bottom of the LFO waveform display and can be used to change the pulse width of square waves, bend sine waves into sawtooths, and so on.

In Sync mode there's the usual choice of straight and dotted note value divisions. In Random mode, the Symmetry slider below the waveform display changes to Similarity and sets the maximum variation allowed between consecutive random values. When the square or random waveform is selected, the Steps Per LFO Cycle slider is renamed Smoothing, and changes are reflected in the waveform display.

This is one of those seemingly simple plug-ins that only reveals its usefulness once you start to experiment with it...

The Envelope section can be adjusted just by dragging the nodes on the graph, after which you can set a Delay (another thin horizontal slider below the display) to offset the start of the envelope by up to 10 seconds after being triggered. Attack, Hold and Release can also be adjusted up to 10 seconds each.

In the analogue world, envelopes are usually smooth but, as with the LFO section, there's a slider control that determines how many steps there are in the overall envelope, from two to 100 and then infinity. So by reducing these we're back to some old-school Sample & Hold-style 'steppiness'. The manual step-rate control keeps the number of steps the same as the envelope time is adjusted.

The Env to LFO Rate knob does pretty much what it says: it allows the envelope to influence the speed of the LFO section. The Env to LFO Amp knob, which can go negative or positive, determines the amount by which the LFO level is affected by the envelope, allowing the LFO to be faded in or out via the envelope. The interaction between the envelope and LFO can give rise to some interesting rhythmic envelopes.

Both the envelope and LFO sections have their own amplitude and offset adjustment so that you can determine the range over which the target parameter is controlled. An oscilloscope–type display at the bottom of each section shows the shape of the modulation signal. 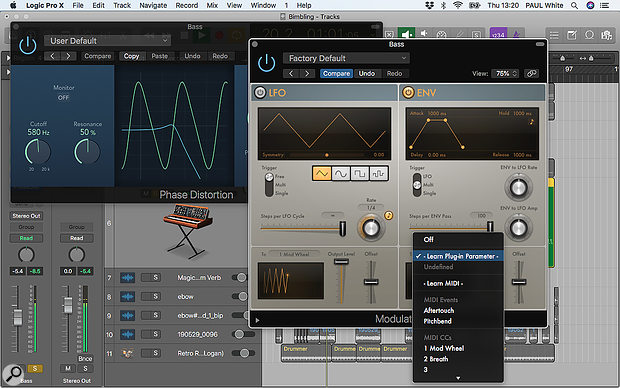 The outputs from the LFO and Envelope sections can be sent to MIDI CC numbers and traditional parameters such as pitch-bend and aftertouch or, using the 'Learn Plug-in Parameter' option, to any parameter of any plug-in inserted after it.

Putting It Out There

When working with MIDI, you can choose a MIDI output channel and then use the drop-down menu to pick from a list of target MIDI parameters. However, if you select 'Learn Plug-in Parameter' from the 'To' pop-up menu in either section, you can target any control in any plug-in sitting below it in the channel strip, just by adjusting the knob or slider you want to control. The name of the plug-in and the target parameter is then shown in the 'To' display. The process is the same for the LFO and Envelope sides of the plug-in, and either can be turned off if not required using the orange radio button in the top left–hand corner of the section.

A word of caution here: not all plug–ins are designed to allow all their parameters to be adjusted smoothly. For example, if you target the Delay or Level parameters of Logic's Phase Distortion plug-in, there are audible clicks and glitches, though its Intensity control works quite smoothly.

If you're wondering what you might use this plug-in for, I can offer a few suggestions, the most subtle of which is to add small pitch or amplitude changes to instruments to make them sound a touch more human — or more analogue. This works particularly well with sampled drums. You can also use a combination of LFO and envelope to add minor changes to the envelope of the original sound, again to add a touch of organic variation. Though you can't target the channel fader or aux sends, you can target any plug-in that allows smooth control over its output level if you need to modulate the overall amplitude.

One of my favourite bass sounds uses Logic's ESM Mono synth fed through the Phase Distortion plug-in, and if that lacks weight I'll double it with an EXS24 set to No Instrument, so I just get a sine wave that I can then feed through the sampler's envelope shaper. This combination gets to be a lot more fun when you target the ESM synth's pitch-bend using Modulator's Envelope output to add a slight pitch dive at the end of each note, while feeding the LFO side to Phase Distortion's Intensity control. Suddenly a rather dull old TB wannabe becomes a bass instrument capable of serious attitude. Other avenues of exploration that have yielded useful results include using both the LFO and Envelope sections to target the filter cutoff frequency of a synth — and that can produce quite complex-sounding results when you set the envelope also to modulate the LFO level.

There aren't many presets to play with as the designers don't know what plug-ins you plan to use, so the ones that are included are pretty generic, affecting pitch and level. However, the one called Pitched Vibrato is worth examining.

This is one of those seemingly simple plug-ins that only reveals its usefulness once you start to experiment with it, and once you start using it, you may find it becoming one of your go-to tools.