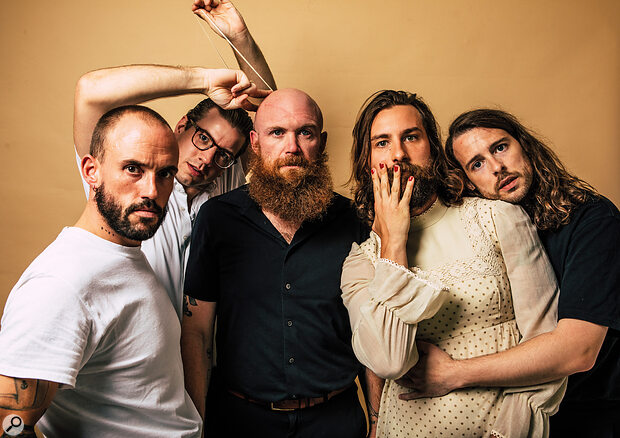 For their latest album, Crawler, Idles guitarist Mark Bowen adopted the role of producer for the first time.

Since 2009, and over four increasingly successful albums, Bristol five‑piece Idles have built themselves a towering reputation as an intense, soul‑baring punk/metal outfit. With their latest record, Crawler, the band have expanded into more atmospheric sonic territories, without losing any of their inherent heaviness.

Idles’ guitarist and co‑producer Mark Bowen tells SOS that the aim for the album was to create a “dark warmth”, inspired by the moody soundscapes of Portishead and John Carpenter’s film soundtracks, while maintaining what he describes as “doom metal techno sludge in the low mids”.

Down the years, the band have worked with various producers, including Space (the Prodigy) and Nick Launay (Nick Cave & the Bad Seeds). But, for Crawler, Mark Bowen chose to step into the role himself, working alongside Kenny Beats, the American hip‑hop producer whose credits include Vince Staples and slowthai.

“It was daunting,” Bowen admits. “I was worried about producing it on my own. So, I got Kenny involved. He’s an incredible producer. But he was just there to give me confidence, really. I knew if I surrounded myself with the right people around this project, that it was going to be successful.

“Honestly, it was the most pain‑free recording process, and mixing process, that we’ve had, from the audio standpoint,” he adds. “Because I think that everyone we were dealing with was open. Everyone was listening, and paying attention.”

Having spent years on the other side of the studio glass — as the guitarist with his amps in the live room, trying to capture his often brutally noisy and aggressive sounds through the control room monitors — Bowen admits he’s often been left frustrated. “I’ve always been, like, a production guy, and I’ve always been interested in effects,” he says. “And I’ve always been interested in how you transfer what you’re hearing. How putting a microphone in front of something doesn’t do it justice a lot of the time.

“It’s always really bothered me, that battle [laughs]. Especially as a guitar player, I stand in front of my amps, and I’m always like, ‘This sounds incredible.’ And then you get into the control booth and you’re like, ‘Aw… you’ve not found what it was that was great.’

“So, it’s been a real journey across the lifespan of Idles. We’ve been a band for 12 years, and we’ve been in a studio a lot of that time. A lot of stuff just never got released because we were struggling in that process. There’s been a big, steep learning curve.” 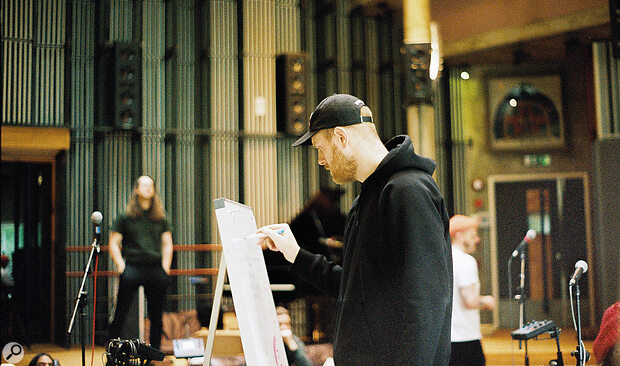 Out Of The West

Idles formed in Bristol at the end of the ’00s around the core of singer Joe Talbot and bassist Adam Devonshire, before adding Lee Kiernan and Belfast‑born Mark Bowen as guitarists, along with drummer Jon Beavis. Starting out with a series of EPs, culminating in 2015’s Meat, the band mainly worked in local studios, including Moles in Bath, and Bink Bonk and the now‑defunct State Of Art in Bristol (owned at the time by Portishead’s Geoff Barrow).

“My first experience of studios was really through Idles,” says Bowen. “A lot of it was kind of relying on the engineers. You’re very lucky in Bristol because you’ve got your kind of Massive Attack heritage and your Portishead heritage. There’s a lot of pretty wonderful engineers floating about in the studios.”

But it was with producer Space that Idles formed their most successful early studio alliance, resulting in their first two albums, Brutalism (2017) and Joy As An Act Of Resistance (2018). The former was recorded at Sugar Cane Studios in Wandsworth, while the latter was done at Monnow Valley Studio in Wales.

“We got on board with Space, who’s a really open‑minded producer,” says Bowen. “He was the right guy for the bill. He helped kind of engender and cultivate that move into the heavier sound, the more kind of blistering, chaotic sound. He definitely was very proactive in exposing that and pushing that with the band.”

In 2019, for Idles’ third record, Ultra Mono, the band decamped to La Frette, a residential studio on the outskirts of Paris. There, working with Nick Launay and his partner Adam Greenspan, the band were afforded more time to experiment with different methods of tracking and overdubbing.

As the title of Ultra Mono suggests, the idea was to further define — and even narrow — the range of Idles’ sound. “Joe really wanted it to be mono,” Bowen laughs. “There was some negotiating done there because it wouldn’t have worked.

“With Ultra Mono it was the first time that production was going to take a role in the song craft on the album. So, we were writing these deliberately obtuse, deliberately simplistic songs. Everyone was kind of playing the same part and the drums were bombastic.

“Everything kind of had to sound singular. So, there were a lot of discussions around that. The album was recorded in less than two weeks, but it took about four months to mix. It was about trying to find that sound within the cacophony a lot of the time. And that’s why the album sounds like it does, y’know. It’s supposed to be this abrasive, obnoxious, singular‑sounding thing.”

One of the great discoveries for Idles at La Frette — a studio previously used by Arctic Monkeys and Nick Cave & the Bad Seeds — was that it wasn’t a posh, upmarket residential facility: “It’s this beautiful, massive chateau,” says Bowen, “and because it’s got this faded glory, it doesn’t feel stuffy. It’s very vibey, very moody, and all the recording space is downstairs. A bit dingy, but an absolute banger of a [1973‑built] Neve [A646] desk. Lots of interesting mics, lots of interesting, weird vintage gear. It definitely adds a vibe to the recording process that is useful.”

The basement drum room at La Frette was formerly a brick‑walled wine cellar, so is particularly live‑sounding. To control the kit recording, Launay suggested to drummer Jon Beavis that he try out a trick the producer had learned when working with Kate Bush in the early ’80s.

“Then we set up in the other rooms. We had a big bass room, and for the guitars, we normally set up a big wall of our amps, and then kind of pick and choose what ones are being used.”

After the La Frette sessions for Ultra Mono, Idles — looking to add hip‑hop sonic dimensions to their traditional rock sound — first asked Kenny Beats to get involved with them in an additional production role. “The low end of the bass, the subs, needed to be cleaned up,” says Bowen. “If you listen to grime and drill and trap, the low end’s very, very concise. It’s in a kind of pocket, which guitar music...