The new high-end and mid-range iMacs look interesting for musicians, offering Core 2 Duo processors and rather attractive prices. Apple Notes takes a look at the spec.

The exciting news this month is the introduction of a new line-up of iMacs featuring the next-generation Intel Core processor, the Core 2, and a new high-end model featuring a 24-inch display. We briefly looked at the Core 2 in September's column, but the big difference compared to the original Core processor is that the Core 2 is a 64-bit processor, making the iMac 64-bit once again. The 24-inch display offers a resolution of 1920 x 1200 (the same as Apple's 23-inch Cinema Display) and this new high-end iMac finally includes a Firewire 800 port, in addition to a 400 port.

Although it was originally introduced as a consumer-oriented computer, the iMac now occupies an interesting position for those involved in making music. The original Core Duo-based iMac (reviewed in June 2006's SOS) achieved almost the same performance as a Power Mac G5, and with the improvements in the Core 2 architecture the new iMac is a pretty powerful computer, even for demanding musicians.

The price-point is also appealing: at £1349 for the 24-inch model, it's £650 cheaper than the base price for a Mac Pro (although the price of the latter can be reduced by choosing a Mac Pro with a slower processor). Considering the number of Firewire and USB music and audio peripherals now available, it's less important than it used to be to have internal expansion options, especially since there are few audio PCI-Express cards available right now for Mac Pro users.

In addition to a new high-end iMac, Apple have also introduced a lower-end 17-inch iMac that retails for just £679 and features a 1.83GHz Core 2 Duo processor with a 2MB level-2 cache (all other models offer 4MB), 512MB memory (upgradable to 2GB — all other new iMacs can now be upgraded to 3GB), a 160GB Serial ATA drive, a 24-speed Combo drive, built-in Airport Extreme and Intel GMA950 graphics with 64MB of shared memory. This low-end model also omits the Apple Remote (which can be bought separately) and on the whole feels like a machine aimed at the general-purpose office user.

For £120 more, you can get a 17-inch iMac with a 2GHz Core 2 Duo processor (featuring 4MB L2 cache), 1GB memory, a Super Drive, ATI Radeon X1600 graphics with 128MB GDDR3 memory, built-in Airport Extreme and Bluetooth 2, and the Apple Remote. This would definitely be the model for the musician on a budget: the larger cache aids processor performance for demanding applications and the dedicated graphics are useful for performance and a degree of future-proofing, as more system graphics are offloaded to the graphics processor (such as the forthcoming Core Animation in Mac OS X Leopard discussed in last month's column).

Do The iPod Shuffle

Apple held a special event this month dubbed 'It's Showtime'. At the event, they announced a long-anticipated move to begin selling movies on the newly renamed iTunes Store. Accompanying this change to the store was iTunes 7, a new release of the now-ubiquitous media player, offering an improved user interface with a better organised source list, gapless playback of tracks, and a neat new view called Cover Flow that allows you to flip 'virtually' through your music and video collection. 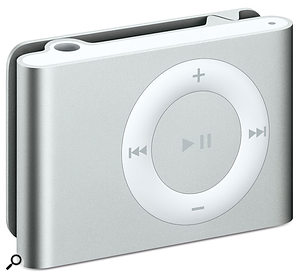 The new iPod Shuffle.Photo: AppleNot so long ago, it seemed that Apple were changing their iPod product line every month, but after the introduction of the video iPod and iPod Nano, last September and October, the iPod line has stayed pretty stable. As they're not a company known for resting on their laurels, though, Apple introduced an improved iPod at the 'Showtime' event. On offer are increased capacity for the high-end model (from 60GB to 80GB) and a reduced price for both models: the 30GB model now retails for £189 and the 80GB model for £259. Other improvements include a brighter screen, the ability to play advanced games that can be purchased from the iTunes Store, and a longer battery life: the 80GB model can now play 20 hours worth of music or 6.5 hours of video in a single charge.

The iPod Nano is apparently the most popular MP3 player in the world, and Apple introduced a new Nano at the same event. If you thought the original Nano looked pretty appealing, the new Nano makes it look like a dinosaur without any make-up. In fact, the new Nano is closer to the design of the iPod Mini that it originally replaced, with a body of anodised aluminium and offered in a choice of colours once again, along with bevelled edges.

Last, but not least, a new iPod Shuffle that takes miniaturisation to a ludicrous new level was announced — it's only a little bigger than the size of the circular button layout, at 1.07 x 1.67 inches! This new size, however, means that the iPod Shuffle no longer has a built-in USB connection (which was really handy on the original Shuffle, as it made the iPod double as a USB memory stick). It now comes instead with a special dock for connecting to your computer's USB port. There's now only one model of Shuffle, with 1GB memory, and it will be shipping in October for £55.