One of the new features added in the Sonar 7 update is a very flexible step sequencer. We investigate its features and suggest some ways to make the most of it. 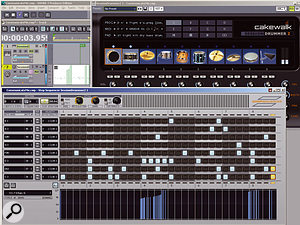 The Step Sequencer is driving Sonar's Session Drummer 2 drum module. Note the clip generated by the Step Sequencer in track 2, and the controller strip along the bottom of the Step Sequencer window.Sonar 7 is out, as I'm sure you all know, and if you read last month's review you'll be familiar with the new features that have been added. Rather than going over those features again in this column, we're going to home in on how to apply some of them... starting with Sonar 7's shiny new Step Sequencer.

Step Back In Time

The step sequencer's origins lie in the days of analogue synthesis. Typically having eight to 16 steps, these hardware devices stepped through a sequence of control voltages that went to an output. If you patched this voltage output to an oscillator's control-voltage (CV) input, you could create short melodies. Sequencer steps usually generated a trigger as well as a voltage, suitable for triggering an envelope or other modulation source.

Step-sequencing methods were later applied to drum machines, and in the case of something like Roland's TR808, 16 steps were available, where each step could contain one or more triggers for triggering drum-sound events at that particular step. For example, with a 16-step sequencer, if you programmed a trigger to occur on the 1st, 5th, 9th and 13th steps, and sent this to the kick drum, you'd have a 'four on the floor' kick-drum beat.

But step sequencing is not only limited to use with drums; one of its most famous applications was the step sequencer in the Roland TB303 Bassline, the early 'groovebox' that powered 'acid' dance music. The repetitive, cyclic nature of patterns generated by step sequencing lent itself well to this type of music.

Sonar's Step Sequencer represents a particular way to view, create and edit MIDI clips. There are several significant differences between this new view and the other editing views available in Sonar, quite aside from the interface (for example, the Step Sequencer inherently creates a MIDI Groove clip, and all notes must be quantised to a grid), but the concept is the same. You can have as many Step Sequence clips running as you want, on multiple tracks or the same track.

Like other step sequencers, this one consists of a matrix, with horizontal rows representing notes and vertical columns representing particular beats or sub-divisions thereof. You click at the junction of a row and column when you want to trigger a particular note event (or drum hit) at a particular time. As step sequencers are often used with drums, it's not surprising that this one integrates with Sonar's drum map feature: you can select a drum map for the Step Sequencer by choosing one from the associated MIDI channel's output field. (By the way, Sonar has, at last count, 5,344,785 drum maps. Or maybe it just seems that way! To find a drum map quickly, with the list of drum maps open, type a letter to zoom straight to a particular company —for example, type 'Y' and you'll jump to the part of the list that has drum maps for Yamaha equipment.)

Because of the Drum Map tie-in, each row can send to a different MIDI channel, or even MIDI port. You can make these assignments in the Drum Manager itself or, as a shortcut, double-click on a note name in a Step Sequencer row and it brings up a Properties box, where you can make a variety of changes, including remapping of notes.

The Step Sequencer has a seemingly unlimited number of rows. I gave up after inserting 130, which covers the available range of MIDI notes and then some.

You can mute and solo individual rows, and if you right-click on the right-hand side of a row, you have the option to insert or delete a row, shift all notes in the row left or right, or clear all triggers in all rows. Furthermore, you can move an entire row up or down to change its position, by clicking and dragging on the row's background (the strip between the Mute/Solo buttons and the Row Note Name or Row Velocity Offset fields), then, if desired, reassign the note it plays. This can be handy if you change drum-sound generators and find that notes that triggered, say, hi-hat for one drum set don't trigger hi-hat in a different set. 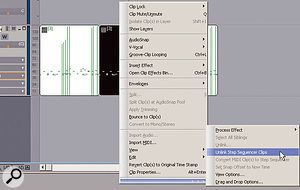 The second clip in a series of three Step Sequencer clips is about to be unlinked (see details on next page). Note that this menu is accessed by holding the mouse over the lower blue band of the main context menu.Each step sequence can be up to 64 beats long, with up to 16 steps per beat. So your step sequences can be pretty long and can feature rapid-fire series of notes. This, to me, is the most important Step Sequencer feature: you're not limited to, say, four beats of 16th notes.

Also included in the Step Sequencer is a controller strip along the bottom of the window, where you can do the same kind of controller manipulation as in the Piano Roll view — a very useful addition. The final feature to mention is Fit To Quarter Note, which allows you to take a clip and force it to fit into a specific number of quarter-notes. This is almost like time-stretching, as the notes are stretched to fit into a larger number of quarter-notes and shrunk to fit into a smaller number. For example, if you had an eight-beat 4/4 sequence and you made it fit 16 quarter-notes, the sequence would play back at half-time.

As you work with the Step Sequencer, it creates a MIDI Groove clip on the selected MIDI track. Because it's a Groove clip, you can 'roll out' the clip for as many repeats as you want.

However, let's suppose you roll out a clip for four repeats but want to make a few small changes on the last repeat. All repeats are linked to the same Step Sequencer pattern, even if you split this last repeat. However, you can unlink a split or copied Step Sequencer clip by right-clicking on the clip you want to unlink, and choosing Unlink Step Sequencer Clips. This command may be one of the 'hidden' ones, so if you don't see it, hold your mouse over the arrows that appear at the bottom of the context menu and the additional options will appear.

The 7.0.1 update to Sonar fixed some Step Sequencer quirks. If you're still on Sonar 7, make sure you download the patch.

This is actually a bi-directional process: you can also convert a MIDI clip to a step-sequenced clip, by right-clicking on the MIDI clip and selecting Convert MIDI Clip(s) to Step Sequencer (again, if you don't see this command, don't forget to hover the mouse along the bottom of the window, which will allow you to see additional, less often-used commands). Note that there are two limitations to the process. Firstly, the Step Sequencer can't place notes that don't fall on the beat — ie. notes that lead or lag slightly. As a result, upon converting, you'll be asked to specify a quantise resolution. Secondly, any controller data contained in the MIDI clip will be lost during the conversion process.

When you drop a note in place in the Step Sequencer, it defaults to a velocity value of 100. If you double-click on it you can type in a new value (or use '+' and '­' buttons or a 'spinner' to change the value), but I find it most convenient to use my mouse's scroll wheel. Holding Shift while you use the wheel provides a fine-tuning function. You can also affect all notes in a row with a per-row velocity offset, or multiply all velocities in a row by a constant. You can't, however, display velocity tails, as you can in the Piano Roll view.

Step sequencers are often used to produce bass lines for dance music, and in this context you may want longer or shorter notes than a simple trigger. In Sonar's Step Sequencer you can tie notes together into longer ones by Ctrl-clicking in the space between them, or just clicking and hitting Enter. The series of notes then plays as one note, using the first note's velocity. 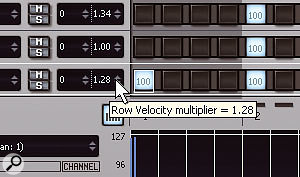 You can multiply an entire row by a specific ratio, or offset it by a specific amount, using the parameter to the immediate right of the Mute/Solo buttons.

There are controls for Articulation, Swing and Portamento (the last, a slide between two pitches, has an associated on-off switch; of course, the instrument you're controlling needs to support portamento for this to matter). While Articulation (which basically sets a gate time) and Swing are useful for drums, Articulation and Portamento are particularly applicable to bass. This is also a good application for the Mono mode, assuming you want a single-note bass line. The Mode switch chooses between Poly, which lets you enter several notes in the same column, and Mono, which allows only one note per column and typically makes sense for bass lines.

So why bother with step sequencing when you can do much of the same thing in the Piano Roll view? It's primarily a matter of personal preference, but it's also a matter of speed. With the Piano Roll, you need to place the note more carefully than you do with the Step Sequencer. There are also no zooming issues, because the Step Sequencer buttons always stay the same size.

I find that a Step Sequencer also tends to promote experimentation. It's so easy to erase and place notes that you can get into just 'painting' notes and then judging afterwards whether the results are any good. Being able to mute and solo individual drum sounds, as well as shift a row of hits left or right, and copy, cut and paste rows, makes it easy to try out various scenarios with different sounds.

Finally, a step sequencer seems to put you in a certain mood — for lack of a better term — and bypasses some of your musical habits. The bass parts I come up with using a step sequencer are very different from the ones I would play on a keyboard, and I suspect that most people would find the same.