Last month, we explained how the business of production music works. But if you want to get into it, you’ll need to learn how to make stings, cut-downs and the other elements of a usable library track. 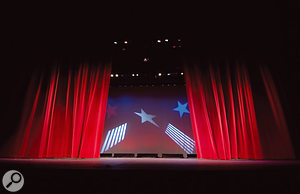 Film trailers often require a unique format consisting of two 30-second halves.OK, so you have been briefed to write some production music, or you want to write something as a pitch to a production music company. “What makes good production music, then?”, you ask yourself. The answer is almost anything, as long as it’s good. As I said last month, in addition to a good tune and very high production values, a spark of originality will often help.

Usually I start out to write a track as if it is destined for a top-selling CD. At this stage I don’t worry about specific timings and usually write something about two and a half to three and a half minutes long. I often use a standard form, which introduces a theme, follows it up with variations or solos, then restates the theme, sometimes with a breakdown either after the first theme or before the last.

Last month, we saw that it’s crucial to be able to offer versions of your tracks that clock in at exactly 10, 20 and 30 seconds, and most of the technical issues that are specific to production music stem from this requirement. However, at the composition stage, I won’t worry about making the tempo suit specific length versions. I’d rather concentrate hard on making the music have the best feel. I have found that if you set a tempo purely to make the 30-second or 20-second version easy to edit, you can end up fighting to get the right groove. The mood I’m in when I first compose a piece plays a large role in determining the tempo, and I find this emotional rather than purely technical connection with the music can really pay off in the long run.

I like to think of myself as owning several hats that I can put on as required; in fact, this approach is good for any kind of music production. So sometimes I have on my trained musician/composer/arranger hat and will be concerned with performance technique, intonation, orchestration. Before too long, however, I will put on my ‘bloke in the street’ hat and ignore all the rules about music I was taught at college, or all the production techniques I’ve gleaned from books (yes, even Paul White’s Recording And Production Techniques, which is never too far from reach). This hat comes in very handy for indie, pop or folk but it also can work well for jazzy stuff, especially, which benefits from unexpected or out-of-the-mainstream elements. I have arranged a few covers of classical tunes, and once again this approach can result in something a bit different to the vast stock of classical music that already exists in production music libraries. (There are some example tracks on my web site at www.petethomas.co.uk/production-music — the one called ‘Nutty Crackers’ is a good illustration of this.)

It can be very useful if you write into the music plenty of good edit points for the film editor. These can include obvious hits, drum breaks and sudden silences (listen to the audio example called ‘Boomtown’, which has drum breaks every eight or even four bars). Key changes and tempo changes are usually a bad idea, as these can make it very difficult to create sensible edits.

As well as full-length versions and various edited cut-downs, there is another format geared specifically for film trailers. This requires a one-minute total length, but with a very definite edit at 30 seconds — in other words, a false ending — so that just the first half can be used. With this format the first 10 seconds can form an intro, with the main theme stated for the next 20 seconds. The second half should be more exciting, building up to the end: think of the typical car chase or rescue.

In addition, I always supply a ‘backing track’ mix without any lead instruments or vocals. This is useful for programme makers to use as an underscore.

Use of effects on production music need not be different to any other kind of music. I might just have a touch more reverb on production music than I would for a CD, but only if it’s a style of music that can cope with it. If you are aiming for something big and brash that might get picked up for a game show or comedy theme it might be appropriate, but I’m always aware of how too much reverb can be disastrous and make the track end up sounding like a bad ’80s demo recording. So, if in doubt, just assume you want the same style and quality of sound as if you were making an album track.

If I know the mixes will be mastered, I will probably not put any compression on the final mix, apart from maybe a very gentle touch of multi-band compression. If there isn’t going to be any mastering then I usually add a medium amount of multi-band and bring the overall level up by about 4 to 6 dB.

It is important that the producer of production music can supply convincing shorter versions and alternative mixes. This saves edits being done by the production music company or the end user, and keeps you in control of how they sound; it also is better to edit in multitrack rather than the final stereo mix. Ideally, each version should work as a piece of music in its own right, as if it had always been intended to be 20 seconds long, or whatever. In practice this can be almost impossible, but at the very least you need to make sure none of the edits sound like, well, edits. You should not have to resort to changing tempo to achieve the exact length: adding a pickup beat, or lengthening or shortening a final chord or reverb tail are acceptable.

Of all the shorter versions you can supply, the 30-second one is probably the most crucial, as many TV commercials and title themes are this length; also, the music is licensed in 30-second chunks. (In the UK, however, a 30-second commercial has a half–second of silence at the beginning and end, so my 30, 20 and 10-second versions are actually 29, 19 and 9 seconds long respectively.)

Whenever I’m commissioned to write a 30-second commercial theme, I channel all my mental processes into making that piece of music fit the length, complete with intro, theme development and coda. However, production music needs not only to be versatile, but to make sense in its own right: it cannot rely on the images to make it work. For this reason I usually start out to compose a meaningful piece of music without any timing restraints. I choose a tempo that will suit the tune and the arrangement, not just one that will make an easy 30- or 20-second version. For me, this means the music can really live and breathe as a track. The tricky bit is then editing it down to the right length!

When I first started production composition I created a new Logic project for each shorter version. Wrong! If you subsequently need to do a remix or restructure, you have to open each version and apply the changes. So I developed an alternative method that works very well in Logic, and possibly better in other sequencers. As described below, I’m assuming that you are creating your cut-down by removing just one chunk from the middle, but it can easily be adapted to taking out two or more chunks. Note that it can be slightly more complex if tempo changes are involved — I always try to avoid them in production music, as the end user may need to do further edits and tempo changes will make this awkward.

At this stage you have a very approximate cut-down version. It might be just right, but the chances are you will need to make some changes. Play it from beginning to end and note how close you are to the target timing. I like to use Logic’s Giant SMPTE Display option (again, found in the shortcut menu in the transport window). Unless your edit is exactly right — which is unlikely — use Undo to get back to the uncut version, and attempt some of the following adjustments:

When you’re happy with the 30-second version, repeat the whole procedure for a shorter cut-down, either by copying and pasting this cut-down as a starting point, or using the original full-length version again. And bear in mind the following tips:

The most important thing is to plan the process from the start — for instance, by making sure the important thematic material is stated at the beginning and the end of the full version.

Always A Sting In The Tail

As well as the shorter versions, you need to supply a ‘sting’, which is a very short fragment of the tune. Often, the final few notes are the most suitable, but it can also be the opening phrase, or any memorable short hook that serves to identify the tune. Stings can be very powerful. On TV you generally hear them just before and after a commercial break, or during the last few seconds of a commercial (the ‘pack shot’). A good sting will lodge itself in the viewer’s mind and should summon up the entire theme. It will act as a musical logo and will be identified by the public along with the title graphics of a programme or brand logo of a product on an advertisement.

You must have a good ending.

As Heard On TV 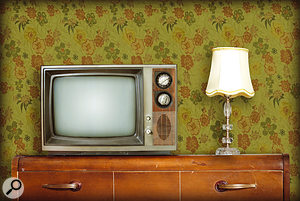 You can’t rely on television viewers having the latest and greatest stereo sets.Television is the most common medium for production music, so it’s a good idea to bear that in mind when recording and mixing. It’s no longer the case that every television has a tiny mono speaker, but some still do, and very few have really good hi-fi audio. Even if they do, people watching are spread around the room (you can’t force them to sit right in front of the TV unless they are five years old and Scooby Doo is on). In addition, in the digital download age, more and more people are watching programmes on computers and portable devices. The crucial factors, therefore, are bottom end and mono compatibility.

A nice wide stereo spread is fine as long as it also works well in mono, and as long as there are no instruments crucial to your mix panned hard left or right. I have found that the most effective region for bass energy is around 80Hz. If I’m not sure of what’s going on below about 60Hz I might put a high-pass filter on the output, although if you know that the mix will be going to a mastering studio any unwanted stuff down there can be dealt with then. I learnt an important lesson about bass frequencies in TV mixes when I provided music for an Orangina commercial. I booked a bass player to play guitarron (a great big bass Spanish guitar), which had a lovely, very low sound; on big studio monitors it sounded beautiful. Unfortunately, on the television it was practically inaudible. The two ways round this kind of problem are either to EQ the instrument to boost around the magic 80Hz (and/or filter above and below), or else to make sure the notes are higher up the instrument.