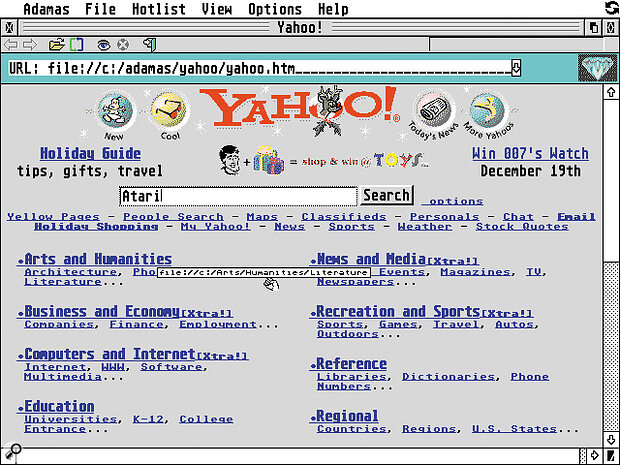 The Light of Adamas web browser: odd name, but does the job!

The free Internet access now being offered by so many companies and the availability of inexpensive net software mean that your Atari computer could be the cheapest way to get on line. Derek Johnson checks out a new German web‑access package and also rounds up some drum machine and synth emulators for the STE and Falcon.

With more and more Atari life moving online (see my news about Atari Computing magazine elsewhere in this column), perhaps it's logical that some of the most active developments in Atari software are to do with email clients, web browsers and other Internet connection tools. And with many ISPs (internet service providers) offering free net access, there really is no excuse not to consider going online with your Atari.

I've news this month of a suite of programs called Draconis, from German company MUCS. The package, which is available in an English version, is compatible with all flavours of Atari, Falcon or clone, provided TOS 1.04 or higher is installed, and will run fine under any enhanced operating systems or alternative desktops that might be installed. A hard disk is pretty much essential, with 10Mb of disk space needed by the software. Note that while the standard ST‑family can handle Internet tasks, its modem port is a little under‑powered; the likes of The Upgrade Shop (+44 (0)1625 503448) and System Solutions (+44 (0)1753 832212) can provide you with the necessary modifications to use modern fast modems with your ST.

As mentioned above, Draconis has several components (some with unusual names; the email program is called Marathon Mail and the graphical web browser is known as The Light of Adamas!). The package is completed by the necessary drivers and a dialler. Direct support is provided for loading GIF and JPEG images (including animated GIFs), and audio is handled by Götz Hoffart's popular plug‑in, GEMJing, which is also included. Installation is made simpler by an easy‑to‑use configuration wizard, and once you're ready to get on line, connection is via TCP/IP or PPP. A 'pro' version of the software will add FTP and Telnet programs to the suite, and also expand the browser with a JavaScript module.

If you're already online (or know someone who is), an evaluation copy of the software can be downloaded from the MUCS web site; it's fully functional except that it times out after a 10‑minute session. The full version costs DM69.95 (about £25), or DM99.95 (£35) for Draconis Pro; that's plus postage, of course, which is 18DM (just over £6) to destinations outside Germany. The MUCS web site is at www.mucs.com/draconis/index.htm, and I found a lot of useful English‑language support at dc2.uni‑bielefeld.de/atari/edracon.htm. Contact: MUCS‑Hannover, Gustav‑Adolf‑Str. 11, D‑30167 Hannover, Germany. 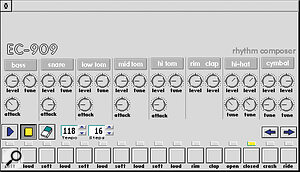 Electronic Cow get the look right with their EC909 TR909 emulator.

Over the last year or so, a couple of PD libraries have left the Atari scene, and this month I have to say another 'goodbye', since the producers of Atari Computing magazine are closing the title. Although the mag's three‑year run has proved that an Atari publication can survive in the late '90s, and there has been noted success in attracting new readers recently, the fact remains that the team are unable to sustain the effort — and cost — involved in producing the mag. This really is a shame; as regular readers of this column will know, I think the magazine is great and have been happy to plug it whenever possible. The publishers have planned the farewell issue for the end of the year, and before then will be putting out two more healthy issues.

If you're a subscriber with any issues due past issue 16, you'll be entitled to a refund (minus a £1 administration fee), though the value of your remining sub could be used to order goods instead, with the admin fee being waived in this instance. Atari Computing reader offers include individual reader disks for all past issues, at £2.50 each, many back issues at £3 each, Steinberg's Pro 24 III at £10.99, and more.

The final issue of Atari Computing will be launched at the ACC 99 computer show towards the end of the year. The date to note is November 13, and the location is once again Bingley Hall, Stafford. (Contact Sharward Promotions on +44 (0)1473 212113 for details.) After that, AC recommend that you get online — the Internet really is the best resource for Atari users.

For now, though, there's Atari Computing issue 14, which arrived recently. As usual, it's full of good stuff; of particular relevance to Atari‑wielding musicians are reviews of Electronic Cow's Charming Chaos and Soundpool's DeNoiser. Also of interest is a quick run‑down of two Falcon accelerators — FX Blowup and Nemesis. The issue costs £3.50, or £5.50 with reader disk full of software. That's £4/£6 to Europe, £5/£7 outside Europe (except for Australia, New Zealand and Japan, which costs £5.20/£7.20). Contact Atari Computing Subscriptions, 73 Bentinck Drive, Troon, Ayrshire KA10 6HZ, or visit their web site at www.atari.computing.com/rpl/defa.... 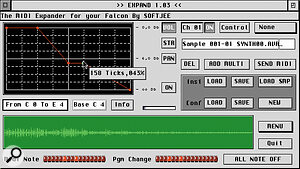 For the last couple of months, I've given over some space in this column to summarise some of the high points in music and MIDI software for the Atari. This month, here's some more of the same: I'm going to quickly run through the available sound‑module and drum‑machine emulators for the Atari and Falcon, for those of you who'd rather like to turn your computer into a virtual classic drum machine. This will be a quick run‑down, though, because there's only a handful of such products, and they either only work, or work best, on a Falcon.

First of all there's EC909, from the intrepid Electronic Cow, which, not surprisingly, emulates Roland's TR909. It runs on the STE, TT and Falcon (but not the STFM). The software offers 16 TR909 samples, an interface that makes a good stab at matching the original's, and controls that include pitch, volume and attack shape. With this program you can compose single‑bar drum patterns and export them to other digital audio software (such as a MIDI + Audio sequencer) as 8‑ or 16‑bit AIFF or AVR‑format sound files, in mono or stereo. Samples can be saved via MIDI Sample Dump, too, and if you want to take EC909 further, you can even replace the drum sounds with your own samples. Additionally, drums and patterns can be triggered over MIDI, and a MIDI File can be generated from finished patterns. EC909 costs just £25 (plus £2 postage & packing), and Electronic Cow can be reached on +44 (0)1426 281347 (or ds.dial.pipex.com/electronic_cow/cownet.shtml).

Electronic Cow's only competition in this field comes from the the equally active French software house Softjee (www.softjee.com). Their EasyBeat (£39.95) is Falcon‑only, and also takes the Roland drum machines as a model. In this case, though, the software comes on two disks, with TR808 and TR909 sound banks; once again, you could also use your own samples in the drum machine. The sequencing side of the program offers 16 patterns, each with 16 bars, and users have control over individual drum level and pan position. Up to eight voices can sound at once. Effects, in the shape of distortion, reverb and echo, are available, and each step can have its own pitch setting. Though the program is French, the documentation is in English.

Softjee have also been working on the virtual sound module idea for some time. The simplest option is MidPlay, which combines a simple MIDI File player with a virtual General MIDI instrument. Again, this is a Falcon‑only product. Their Expand program is more configurable, and behaves more like a user‑definable 16‑part multitimbral sample playback unit. You load samples, arrange them into keygroups, modify the samples with the onboard synthesis feature and play them from a MIDI keyboard or MIDI sequencer running on the same machine. If you're worried about memory limitations, Expand has the option to play sounds off hard disk, so sample size is only really limited by the size of your disk. Sample formats recognised include AVR, D2D and AIF (the latter is used by Steinberg's Cubase Audio Falcon), and the software can handle sample rates of up to 50kHz. By juggling sound quality against processor speed, polyphony in the range of 12 to 20 or more voices is available. Expand costs £44.95.

Softjee products are distributed in the UK by Cortex Design (+44 (0)121 693 6669, www.titan‑bss.co.uk). If that sounds like a new name to you, it's actually the company that was previously known as Core Designs (which was previously known as Titan Designs). Apparently, it was discovered that another company has been trading with the Core Designs name, hence the sudden change. All other details of the Birmingham‑based company remain the same. 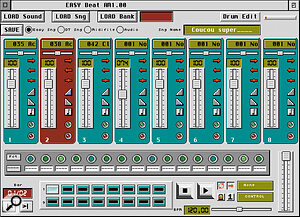 Softjee's Easybeat: get the virtual drum machine treatment for your Falcon.

Atari software writer Dave Murphy has recently gained employment as a Gameboy developer, and to celebrate he's released his Videlity Falcon screen enhancer as freeware. The software provides full support for the external hardware from the Blowup and Screenblaster packages, and will allow access to the quarter‑pixel VGA true‑colour settings allowed by BSS's Nemesis accelerator. Dave mentions that a registration scheme may be put in place at some time, whereby users can get the latest version sent automatically for a small fee. Check out his web site at www.users.zetnet.co.uk/dmurphy/v....