We dig deeper into the audio and MIDI effects included with Live 11.

Live 11 comes with new sound libraries, instruments, and audio and MIDI effects, all of which enhance Live’s sound‑design and processing capabilities. In this month’s column we’ll take a detailed look at the audio and MIDI effects, and you’ll find brief descriptions of the new instruments and sound libraries in the ‘Sound Packs’ box. One thing to keep in mind as you explore the new devices is that Live 11 Racks now allow as many as 16 Macro Controls as well as presets called Macro Variations. When you’re exploring one of the Rack examples, it’s a good idea to reveal the Macro Variations (camera button icon along the left edge of the Rack) and create a new variation with your initial settings. That lets you easily return to those settings after tweaking the Macro knobs (and saving a new variation if desired).

Let’s start with PitchLoop89 (Screen 1), a Max For Live device by Ableton co‑founder Robert Henke that emulates the vintage hardware pitch‑shifting delay, the Publison DHM 89. Think of its parallel pitch‑shifters as tape‑loop recorders with moving heads. With a pitch‑shifter channel’s Hold button (∞) turned on, the channel’s captured audio will loop continuously. You may want to assign a MIDI note, pedal or switch to each Hold button. To the left, the wedge pointing down links the two channel’s settings — changes in the top channel are reflected in the bottom channel, but changes in the bottom channel do not affect the top channel. The Back buttons reverse the playback direction and the Short buttons result in shorter, rhythmical delays.

The main controls for each of the delays let you set the size and position of the grabbed slices with the option to randomise or apply an LFO to the position. You can also alter the pitch of the grabbed audio and apply vibrato. The output section includes a band‑pass filter and feedback control for each channel, three output modes, and stereo and dry/wet mix settings. Check out PitchLoop89’s default lesson, presets and Ableton tutorials for all the details.

Live 11 comes with new sound libraries, instruments, and audio and MIDI effects, all of which enhance Live’s sound design and processing capabilities.

You’ll find two new spectral effects, Spectral Time and Spectral Resonator, in Live’s Core Pack. Both begin with a real‑time spectral analysis of incoming audio and let you manipulate that in different ways. Spectral Time is the more aleatory of the two, but both can produce results ranging from slight modifications to unrecognisable alterations. 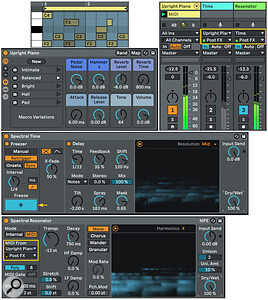 Screen 2: Spectral Time and Resonator combine to process the Upright Piano. That is mixed with the unprocessed piano track.In Screen 2, I’ve used both effects to process Spitfire Audio’s Upright Piano played by a two‑voice MIDI clip that is also routed to Spectral Resonator to control its polyphonic transposition. The setup uses separate tracks for Upright Piano, Spectral Time and Spectral Resonator. Their input routings let you audition individual parts by simply soloing or deactivating tracks while tweaking settings. You could use a single track and manipulate the effects’ dry/wet controls to audition their settings, but using separate tracks also lets you easily mix the three parts in the final result. Each Spectral effect has a display graphing its output’s Dry/Wet (orange/blue) mix. You can hide the display with the wedge at top‑left to save space. When you want a more detailed look at what’s going on, group the three tracks and insert Live’s Spectrum effect on the Group track.

Spectral Time comprises Freezer and Delay sections, which you can enable individually or in series. With the Freezer in Manual mode, toggling the Freeze button (snowflake icon) toggles the Freezer. In Retrigger mode with the Freeze button on, you can trigger freezing with onset transients or sync’ed to tempo or time. In Screen 2, the Freezer section is set to freeze parts at quarter‑note intervals. In the Delay section, the top controls set the delay time and pitch shift, whereas the bottom controls affect the frequency range and mix. The Spectral Blur effect in Live’s Creative Essentials Pack is an interesting alternative to Spectral Time in this example.

Spectral Resonator offers a more pitch‑influenced spectral process. In Screen 2 it uses the pitches in the piano track’s MIDI clip to generate a polyphonic output. In the middle section, the Transp. knob transposes the input, whereas the Stretch and Shift settings affect the output. The Decay and Damp knobs control the tail of the sound. The Chorus, Wander and Granular buttons process the output relative to the Mod Rate and Pch.Mod settings.

Inspired By Nature is a free Live 11 Pack of six Max For Live devices by Dillon Bastan:

Each Inspired by Nature device has numerous parameters and presets.

Live 11’s new Hybrid Reverb combines convolution and algorithmic reverbs followed by an optional four‑channel EQ. You can use the reverbs by themselves, in series (convolution comes first) or in parallel. When both are in use, the Blend knob controls their balance. The algorithmic reverb offers five digital delay simulations. The convolution reverb includes nine categories of impulse response samples. A User category lets you add your own impulse‑response samples, and this is where Hybrid Reverb comes into its own as a sound design tool. 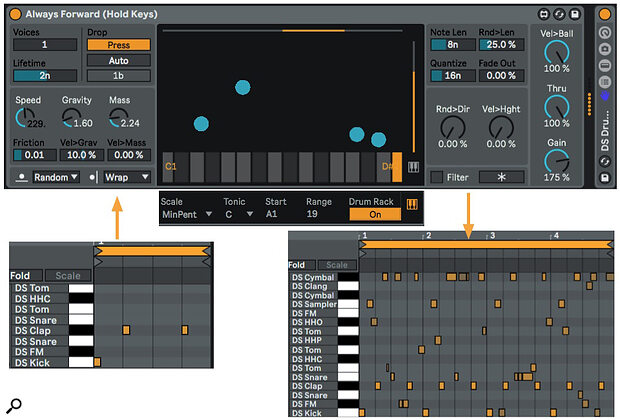 Screen 4 shows settings for a Hybrid Reverb inserted after the Bouncy Notes' Drum Rack in Screen 3. The Convolution IR sample is taken from the Upright Piano track in Screen 2. The reverbs are arranged in parallel so that the algorithmic reverb adds a sharp echo to the drums while the convolution reverb provides a piano‑like ring triggered by the drums. The Blend and Dry/Wet settings determine how much of each effect is heard. Hybrid Reverb’s EQ settings give a significant cut to the low end and boost the high end. 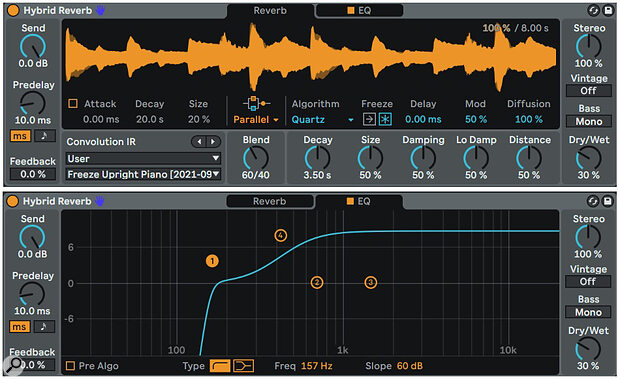 Screen 4: Hybrid Reverb processes a drum track using an echoey algorithmic reverb in parallel with a convolution reverb using a piano clip as its impulse‑response sample.

Designed primarily for experimentation and improvisation, Drone Lab is a collection of Instrument and Drum Racks. Categories like Harmonic Drone Generator, Laboratory and Xtonal give you an idea of what’s in store. A good starting point for this Pack is to load the Earth or Tremors set from the Improvisation Sets folder. Both Sets use Session view Follow actions to trigger clips on multiple tracks. All volumes but the first track’s are zeroed — manipulating them is the ‘improvisation’ part. The MIDI Clips and Samples folders are also good places to explore. And you’ll find an Audio Effects Racks folder with effects for adding mayhem to any of your Live sounds.

At the other end of the spectrum, Mood Reel offers a huge collection of Instrument and Drum Racks designed primarily for tonal and Foley sounds. Categories described as broken, disembodied, ominous, playful and tranquil give you an idea of the textures available — you’ll find many unusual and eminently playable instruments.