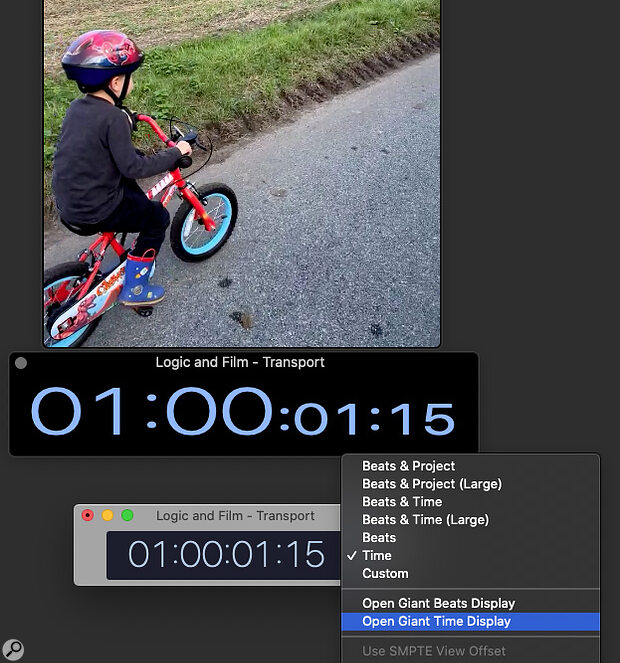 Logic Pro X contains everything you need to add high‑quality audio to your videos. Let's find out how...

Logic Pro X may not be the first DAW you think of for working with visual media, but it is in fact more than capable of creating sophisticated soundtracks for video content. In fact, its close integration with Final Cut Pro makes it the ideal DAW if you are working with that particular non‑linear editor (NLE).

To get a movie into Logic, just drag the file onto the Arrange page. You’ll be asked to open the movie and whether you want to extract the audio track — this is probably a good idea. Depending on the file, Logic may also complain that the default frame rate isn’t the same as the imported movie, so you should choose the option that conforms the Project’s frame rate to the video’s. This will then load the video into a separate window and place its audio on a new track. Depending on your computer, you may want to avoid using 4K+ resolution videos, although the latest Macs won’t break a sweat working with these. I find that 720x960 resolution is just fine, and Logic can import almost all the common video formats.

The Video window can then be resized, either by Ctrl‑clicking and selecting a preset size and location or by using the mouse and dragging it. When you’re working with audio and video, the positioning of content in absolute time is essential. Movie time is usually measured in SMPTE timecode values of hours, minutes, seconds and frames, so open the Preferences from the Logic Pro menu and choose Display Time as SMPTE, with or without subframes depending on how much resolution you require. If you Ctrl‑click on the control bar and change the LCD to Time, these preference changes will then be reflected in the Time window. It’s useful to have a timecode display running alongside your video, so create a Transport Float from the Window menu, Ctrl‑click on it, set the LCD to Time and de‑select every other option. This creates a resizable timecode window. Next, click on the downward arrow on the right and select Open Giant Time Display (Screen 1). This generates a nice timecode window that you can place under your video. These window positions can be saved as Screensets from the numerical menu to the left of the Help menu.

If you click on the Global Tracks button, you’ll see the movie path already there, and dragging this area down should display thumbnails of the video. You should Ctrl‑click and open the Marker Global track while you’re here, as Markers can help when moving around lengthy sections of footage. You can also auto‑create Markers from scene cuts or Marquee selections from the Navigate/Other menu.

If you’re a seasoned Logic user, you probably have strategies for moving Events and Regions around, but there are some specific tools that are particularly useful when working with video. You’ll want to turn Snap off as it’s unlikely that any audio you place against a video will be on a defined grid (unless it’s a music video, perhaps). You can move the playhead in frame steps by holding the Ctrl key down when dragging. You’ll probably want the Toolbar visible — it’s in the View menu — as this is where you’ll find the Nudge value settings (you’ll usually want to select Frame or finer). There are several Nudge Region/Event key commands available when dealing with SMPTE time, and you’ll find it easier to finely move Regions or Events using these, rather than dragging them with the mouse. 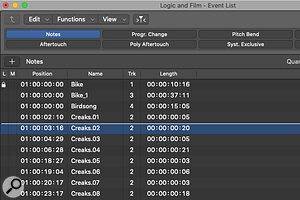 Screen 2: The List Editor in SMPTE mode.If you are acting as sound designer and audio editor on a production, the audio you might want to use could consist of pre‑composed music, dialogue, sound effects and ambient noises. You might also be composing directly alongside the video. But the basic concept is that you want to make sure each piece of audio is located precisely where it needs to be on the Arrange page, in sync with the video footage — it’s no good the sound of an explosion being off by a few milliseconds! If you’re working on sound design, you’ll first want to import all the audio files you’ll need for the production. If you open the Brower’s window from the View menu, you can add audio files from the Project tab. These are added to the Project and can be auditioned and looped.

To position the audio roughly where you want it on the timeline, move the playhead to the position you want (or type in the position in the Control Bar Time window) and drag the audio file or region to the playhead — a new track will be created. You could then move these regions into the precise location using the Nudge key command, but sometimes it’s easier to do this numerically using the Event List editor. Open this either from the Show List Editors option or the Open Event List entry in the Window menu. You’ll need to change the Position display to SMPTE using the Show Event Position and Length as Time or Bars/Beats key command, and de‑select all the display filter values except notes, as shown in Screen 2. You can now change the precise SMPTE time position of the start of your regions, by either typing in values directly or click‑dragging with the mouse. If you Ctrl‑click on a position, you can select Lock SMPTE Position, which fixes the Region or Event to an absolute time value and can be useful if you start messing about with Tempo changes when adding music, for example.

If you listen to old films, you’ll often hear jarring changes in the audio quality of dialogue in a scene. This is often because dialogue has been replaced that was recorded in a different location than the original audio, and dubbed on later. Unless the audio engineer was very careful, changes in background ambience will have a profound effect on how this extra dialogue fits in with the original. Film sound people would usually record long sections of ambient noise for each location, but these days, canny engineers also take an impulse response of the location’s ambient space. Creating these using Logic’s Impulse Response utility was covered in Sound On Sound February 2008, and the files generated can be loaded into the Space Designer reverb (Screen 3). This response can then be blended in, alongside any recorded ambience, to better recreate the conditions that were present when the original dialogue was recorded.

The process of replacing dialogue in post‑production is called Automated Dialogue Replacement (ADR), and is often recorded live to a playback of the film, with voice actors attempting to lip sync to the original speech. The name is somewhat of a misnomer though, as it’s rare that anything is automated! In Logic, once a performance is recorded, you could use Flex audio to position elements of the dialogue precisely where you want it to be, but the method outlined below might be more useful and, er, flexible! Film sound designers also often add the sounds of footsteps, breaths, creaks and so on, either to create a hyper‑realism effect or because no original audio was captured. Again, these sounds are often recorded in real time to a playback of a video, but sometimes ‘stock’ effects are used, which obviously will not conform to the footage.

Logic Pro’s Quicksampler is great for synchronising ADR or Foley to a video.

Logic Pro’s Quicksampler is great for synchronising ADR or Foley to a video. If you drag a region of dialogue or Foley to the Track area, you’ll be asked if you want to create a Quicksampler — choose Original, and the plug‑in’s interface will be opened. Now select Slice and reduce the sensitivity to zero. You can then manually add slice markers to the start (or at points that need lining up) of portions of the audio (to delete a marker, Ctrl‑click it). Each of the slice marker areas is assigned a MIDI note (see Screen 4), so you can then position each of these separate audio portions as MIDI data and finely adjust their position using the List Editor or Nudge key commands. You can also record directly into Quicksampler if that will help your workflow, using the Recorder tab. You can be very precise in adding slice points to your audio, and moving these snippets into the correct place using MIDI events is easier than trying to synchronise portions of an audio region by dragging Flex markers around.

If you need more sophisticated editing of the slices, you can swap the Quicksampler for Logic Pro’s Sampler in the Instrument slot. The Quicksampler slices are automatically moved into Sampler, and each can then be treated separately in the Mapping window. Here you can change individual slice’s pitch, level, pan and velocity values, and select several Follow Tempo options. There’s more on Logic’s samplers in SOS November 2020.

Once all your audio is recorded or imported and mixed, you can bounce down to a stereo or multichannel file for reloading into an NLE for post‑production. If you are still lucky enough to have Quicktime 7 Pro available, you can paste your audio into the original video footage file — a feature that the latest Quicktime Player is sadly lacking.

While you can buy plug‑ins that are specifically designed to work with film, such as Synchro Arts’ Vocalign, Logic can perform most of the duties unaided. The latest smartphones video recording facilities are of an extremely high quality, so creating professional‑looking footage has never been easier. Logic Pro is perfectly capable of making sure the audio is up to scratch too.