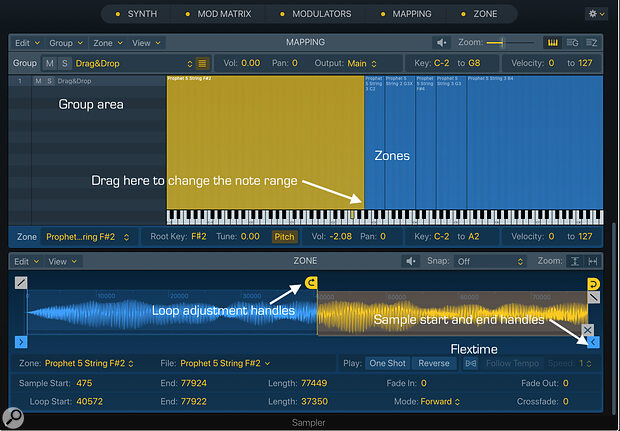 With the introduction of Logic Pro X 10.5, EXS24 has been ‘replaced’ by a plug‑in instrument called Sampler.

My first sampler was an Ensoniq Mirage, on which editing was performed using a two‑digit LED display and the parameter values were in hexadecimal. When Emagic’s EXS24 software sampler became available at the turn of the millennium — and at an extra cost of £249 — it was a game‑changer for Logic users. Fast, easy on the CPU, and with a simple‑to‑use interface (well, compared to the Mirage!), Emagic soon upgraded the sampler to version 2. But time has passed, and the ease of use and sonic and programming potential of other sampling software, notably Native Instruments’ Kontakt, left Logic users crying out for an EXS upgrade. And with the introduction of Logic Pro 10.5, we finally got one.

EXS24 has been ‘replaced’ by a plug‑in instrument called Sampler. I put the word replaced in inverted commas because Sampler retains much of what was good in EXS24, including its thrifty CPU usage. When a Logic Pro song is opened in 10.5, any instance of EXS24 will be replaced with Sampler, complete with all samples and settings. The first thing you’ll notice is that Sampler’s interface now conforms to the look and feel of Logic Pro’s other instruments and is much bigger, with easier‑to‑adjust controls (EXS24 was designed for a pre‑Retina, pre‑4K world). Sampler still works with many of the nomenclatures you’ll be familiar with from EXS24, namely Instruments (the preset containing samples plus settings), Zones and Groups, which are all much easier to create and use. It’s available as a stereo, mono, multi‑out or 5.1 surround instrument.

You can drag files from Finder or the Arrange page, or even a Marquee selection, into the Sampler window, which will then display several options for importing your audio. Which one you choose will depend on what you’re trying to achieve. The separate Zones boxes will appear when you drag over the Chromatic and Optimized boxes.

Sampler provides a number of options for automatic importing and processing of your samples.

Use Chromatic / Zone per File if you have a single sample you want to play across the keyboard. You can drag the note range that the audio will play over and an automatic loop will be created. By default, the samples will change speed from the root key as you play across the keyboard, but clicking on the little Flextime ‘bow tie’ at the bottom right will make sure that all samples are in time. You can change the loop start and end by dragging the handles, add a crossfade and make the sample play a single time (‘one shot’) or in reverse. If you want to have several different samples play over the keyboard, just drag another file onto the area just over the keyboard and set their root key and range. You can also drag the start and end of the samples using the on‑screen handles, and change the sample and loop parameters numerically.

If you have several notes from an instrument, say a recording of each of the notes of a piano, you should select the Optimized / Zone per File option. Logic Pro will automatically detect the pitches of the notes and place these into the sample window, create loop points and optimise the balance of the levels of the different Zones. If you have samples with the same root note but different velocities, Sampler will create velocity Zones. You can also quickly create a Sampler Track by dragging your audio files onto a portion of the Arrange page grey Track area and choosing Sample (Optimized map) from the pull‑down menu. 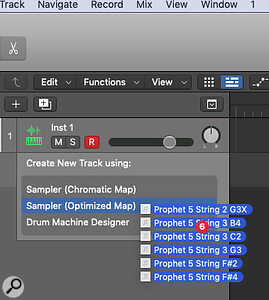 You can easily create sampled instruments out of your own recordings, whether they’re separate per‑note files or a single continuous recording.You can quickly separate out notes from, say, a vocal or bassline, by using the Optimized / Zone per Note option. You can also use this feature if you have a single audio file with separate notes recorded in it (every note on a synth, say), to save a lot of time cutting the audio into separate files. I found the results of this to be quite hit and miss, however, as it all depends on Logic Pro correctly detecting the pitch and duration of the separate parts of the audio. My favourite use so far is to take a bassline recorded by a real musician and drop it into Sampler, which then separates out the notes and creates a multisampled Instrument that I can use if any remedial/new bass parts are required.

If you want to split audio into its separate components at positions of silence, drag the audio to the Chromatic / Split at Silence area. This splits the audio at these points and maps the resulting splits into Zones. You can fine‑tune these using the start and end handles of the selected zone. This, for me, was the least useful import option, but I’m sure it’ll find use somewhere.

You’ll notice that dragging audio files onto Sampler will create a Group. If you then add more audio via the import options above, another Group will be created, and both sets of samples will play back when triggered by the same MIDI note. You can change the relative levels, pan and outputs of the Groups and decide their responsiveness to incoming velocity. In this fashion, you can quickly create complex multilayer instruments.

Once you have your samples mapped, it’s likely that you’ll want to process them in some fashion. The Synth area covers the overall pitch volume and pan of your instrument, and also houses two filters that can be arranged in series or parallel. I love filters and these are some of Logic Pro’s best, with a wide range of types that sound either lovely or interesting. Using the Drive control, I managed to make a passable imitation of my MS20’s high‑ and low‑pass filters that I think sound better than Korg’s own virtual version. 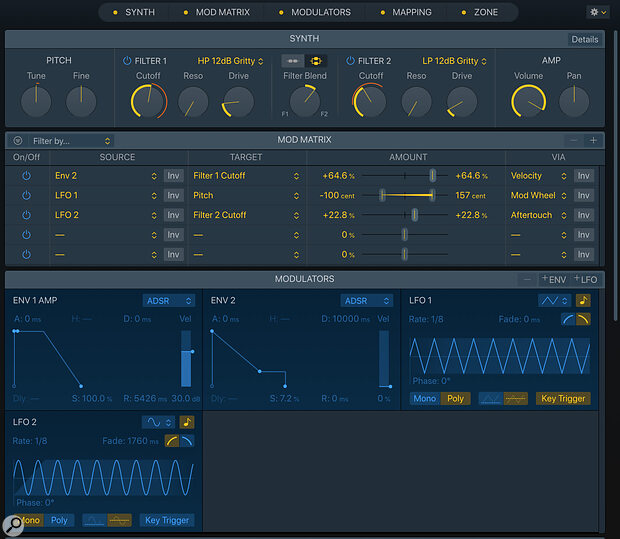 The envelope generators have a wide range of shapes from AD to DAHDSR (Delay, Attack, Hold, Decay, Sustain, Release) and are available alongside four multi‑waveform LFOs with fade in and out, mono, polyphonic and tempo‑sync settings. The envelopes and LFOs are assigned to the parameters to be modulated in the Mod Matrix section. Here you choose the source (LFO, Envelope, etc) and what it will affect (Pitch, Filter cutoff and so on). The Intensity and Via sections work together so, for example, if you choose the Modwheel to affect the LFO in the Via menu, you can set the lower and upper intensity limits for the effect, depending on the wheel position. The Mod Matrix is 20 modulations deep and most Sampler parameters can be modulated, so that should be enough wobbly options for anyone.

I love filters and these are some of Logic Pro’s best...

Logic Pro X also has a cut‑down version of Sampler called Quick Sampler. This supports a single audio file and has just two loading options when dragging files into the plug‑in window: Optimized crops any silence from the audio and searches for loop points, while Original just loads in the file so you can edit it manually. 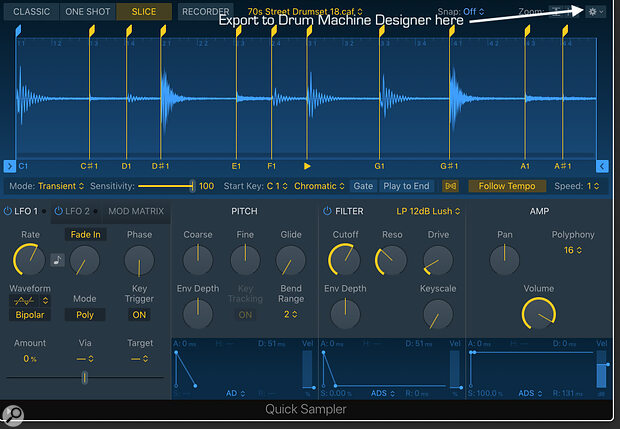 Quick Sampler is ideal for creating your own drum instruments, and can export samples and settings straight to Logic’s Drum Machine Designer.

Once loaded, many of the parameters available in Sampler can be applied to the audio, such as loop points and sample start and end points, alongside more limited versions of Sampler’s filter (one only), Envelopes and Mod Matrix. The Slice setting is really useful: it places ‘slice’ markers on the audio display, each mapped to a MIDI note, which you can drag to adjust the range of the slice and define how they will be played back. This type of beat slicing is particularly useful for cutting up drum loops to create new rhythm parts, and once you have your slices, you can send them to a Drum Machine Designer track (from the ‘cog’ icon at top right) to create an instant, bespoke drum machine. It’s stupidly easy to use and I put it to work right away cutting up a recording a band of mine did in the 1980s for reuse in a new piece of music. If you drag an audio file to the Track column, you can create a Quick Sampler Track in the same fashion as you can for the Sampler. Quick Sampler also has a feature that’s been almost completely absent since the world moved to software: you can record audio directly into the plug‑in! Simply choose the audio input, whether you want to monitor the input or not, click record and voila!

This has been a very brief overview of the new Sampler instruments, but once you have your samples imported, the finer editing of the samples, Zones and Groups is quite extensive and very EXS24‑like, so old hands should find the processes familiar. Sampler doesn’t contain any of the extended scripting features of Kontakt, but it does address most of the common sampling features. Apple have created a sampler plug‑in that is easier and quicker to use and more integrated into the workflow of a modern DAW, and the new filters sound great too. EXS24 is dead: long live Sampler!