Noises Off By Neil Cowlan 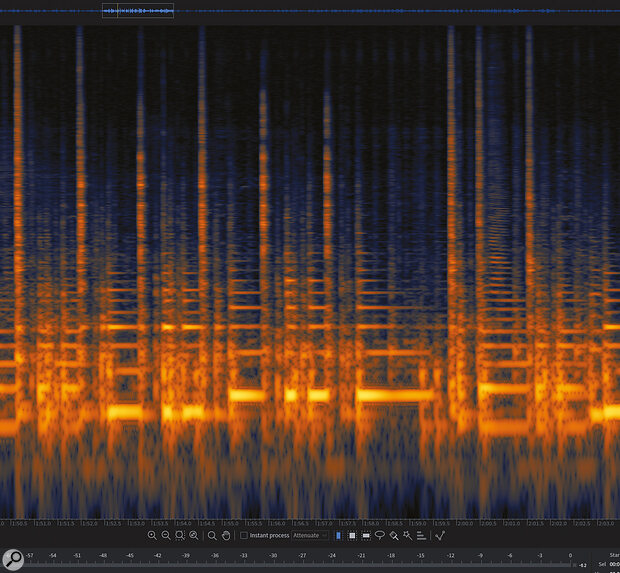 With the right guidance, iZotope's RX can remove problem sounds that would otherwise ruin a mix.

Last time in Part 1, we introduced some of the features of iZotope’s RX Audio Editor and considered how to use it to perform fairly simple noise‑reduction tasks such as removing buzz, hum or hiss from a recording. This sort of ‘system noise’ is usually fairly constant, and especially if you have a section of recording that contains only noise, can be targeted pretty effectively using the presets in RX modules such as De‑hiss. In Part 2, we’re going to look at a different and more challenging application for RX‑type spectral processing: removing unwanted sounds that have been captured along with the wanted audio at source.

My first example comes from a recording where the double bassist had played a lovely part. It had been recorded nicely, in a nice room using nice microphones. Sadly, the bassist had a habit of tapping the edge of the neck, and his timing was so good it completely covered the snare! In this case I was working on the track as a mix engineer and the client hadn’t noticed it because they were listening with what I call ‘attached ears’. It’s always hard to be objective on your own music.

Screen 1 (above) shows the bass part loaded into RX. As usual, you can see the horizontal lines which represent the notes. There’s some ambient noise that we don’t want — in this case, a little room noise and some spill from the headphones, plus some other incidental noises from the performer — but it’s nothing too severe. The problem noises are easily identified as the tall vertical spikes. When the player slaps the neck, it generates a sharp transient which contains energy throughout the frequency range, from 50Hz right up to 20kHz. The only real option here is to manually select these noises and try to remove or subdue them, being careful to not affect the tail on the notes. There are a few ways of approaching this, and my eventual solution was arrived at only after working through a few different options. 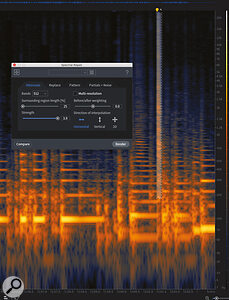 Screen 2: Here, I’ve made a selection around one of the noise spikes, going down into the lower frequencies as far as possible. The Spectral Repair tool will be able to attenuate the noise without causing too much damage to the overall audio and I can then remove the lower parts with the manual select tool. A steady hand is advised!As we saw last month, RX processing is applied to the area that you select within the spectral view. A key challenge, therefore, is making the most appropriate selection. You can do this manually, or use various semi‑automated options. In this case, I wanted to leave the low frequencies alone, because applying processing in the bass region would affect the wanted sound of the bass notes, which sustains below the clicks. For this reason, I used the variable selection tool, which allows me to define a rectangle within the spectral window covering only the part of the click that I want to process.

Once I had selected only the area that contains an unwanted click (Screen 2), I could then experiment to find the most natural‑sounding way to process it. Simply removing or attenuating the contents of that region risks leaving a ‘hole’ in the audio which could be just as problematic, so I turned to RX’s fiendishly clever Spectral Repair module. This allows you not only to attenuate or remove the selected audio, but to fill in the resulting gaps by interpolating or resynthesizing a convincing‑sounding alternative using the wanted audio either side of the hole.

Four algorithms are available, called Attenuate, Replace, Pattern and Partials + Noise, and some trial and error is usually involved in finding the most appropriate for any given situation. In this example, I used the Attenuate algorithm. The Surrounding region length slider determines how large an area outside the selection is to be used as source material for the regenerated audio, while the Before/After weighting slider tells RX whether to lean more heavily on material to the left or right of the selection. 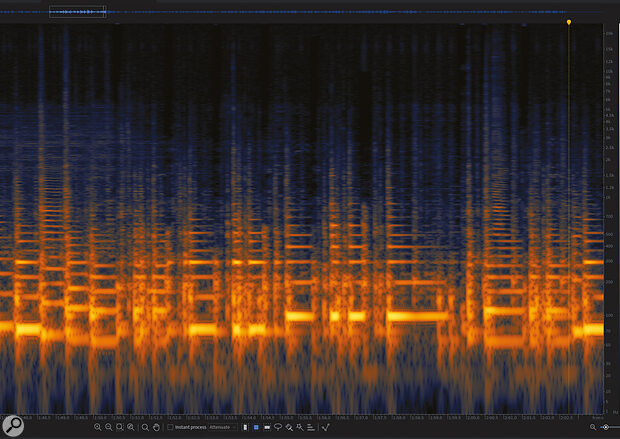 Screen 3: The mid‑ and high‑frequency sections of each click have been removed, but there’s still some residual noise in the low frequencies.

Screen 4: Removing the remaining low‑frequency components of the noise without also affecting wanted audio requires manual selection and a steady hand.Screen 3 shows the results of applying this process to each click. You can see that the spikes have gone, but there are still some parts of the noise remaining in the lower frequencies. (To do detailed work in this frequency range, it’s useful to switch RX’s display to the ‘extended log’ view so that you can see this part of the spectrum more clearly.) Making a single selection covering the whole vertical range won’t let me remove these without affecting the pitched elements of the sound. Instead, I need to use RX’s freehand selection tool to manually draw around each one. It’s possible to have multiple separate areas selected simultaneously: to do so, draw around the first area, then hold down Shift and draw around the next one.

In Screen 4 you can see where I have manually drawn around the remaining low‑frequency elements of one of the problem noises. The question then is to decide whether to cut them completely, or interpolate material using the Spectral Repair as before. Cutting them completely is simpler and in this case, didn’t cause a problem.

Once you’ve gone through and found all of the issues, the last step is to check that it sounds good. This is where you need to remember the overall goal of the work. In this case the bass part was going into a track, so the minor issues that have been caused by doing the work will actually be masked by the other parts of the band. This is important to remember, because on this audio I could have been overly obsessive and spent too long working on it. Always think about the end result.

Having worked through and addressed the problems, the next step is to reintegrate the repaired audio into its context — in this case, the mix within my DAW. Sometimes this can be a bit like matching the paint on a car for a respray, especially if you are only repairing sections within a part. The EQ will need to be adjusted on the repaired regions, and these may even need some gain adding at times. On this example, the repair work didn’t affect the notes themselves, so I could simply splice the repaired regions back into the track. You can hear the result in the audio file example online.

I’ll end this brief guide to RX with an example which really pushes its capabilities to the limit, and required very detailed manual work. This was taken from a post‑production context, but similar scenarios can arise in music too. We’re dealing with dialogue recorded outdoors in a very busy street. There are hundreds of people. There are cars. There are wind gusts. It’s got it all!

With this sort of job, you need to pick your fights. You’re never going to turn it into a quiet studio recording, so which elements of the audio can you work on to make a real difference? In this example, I eventually removed the sound of a family walking past the camera talking and laughing loudly, lots of wind gusts, and various car noises. As an example, I’m going to take a car horn that sounds twice, slightly overlapping the first word of the dialogue. The skill here is to remove the horn without making it sound like we have made something ‘censored’ for a photo. We don’t want the sound to just be blurred over, we want to remove it or subdue it.

Screen 5: This outdoor dialogue recording is a mess of random sound! 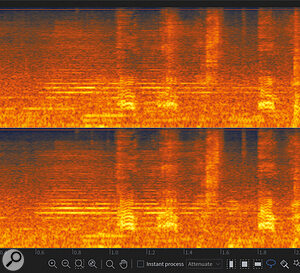 Screen 6: Zooming in enables us to see the harmonics of the car horn in detail.The first challenge is to identify the horn in RX’s spectral display. As Screen 5 shows, there’s a lot of sound, at all frequencies! Counter‑intuitively, this can be quite helpful here, because the ambient sound consists of things like crowd noise and engine rumbling, which are chaotic and continuous: in the zoomed‑in view in Screen 6, the sudden blast of the horn, with its pitched content, stands out in contrast. RX has done a fine job of displaying the harmonic content of the horn tone as a series of stacked lines.

As you’ll see, there are a lot of these lines. That raises the next question: do we try to remove them all, or just enough to lower the sound of the horn relative to everything else, and thus stopping it from being a problem?

RX processing is applied to the area that you select within the spectral view. A key challenge, therefore, is making the most appropriate selection.

RX’s wand tool is designed to automate the selection of visible sounds within the spectral window. There is also a harmonic tool, which automatically identifies the upper partials of a sound you select. In this case, however, the wand tool was confused by the presence of so much extraneous noise, and I wasn’t sure that everything the harmonic tool was picking up was really part of the horn sound, so I used the manual tool to very carefully draw around the harmonics one by one. This was a process of trial and error, requiring patience and a steady hand to go through each of the obvious bands of sound and attenuate them in turn using the Command+E function. RX has a very useful activity log at the bottom right of the screen, which allows you to retrace your steps. 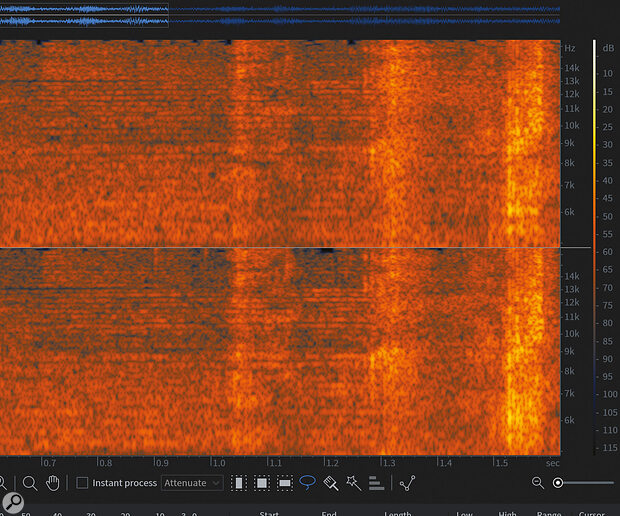 Screen 7: The high‑frequency region with the car horn removed...

Again, I used the cut tool rather than Spectral Repair: as long as I was accurate with the selection tool and checked every step of the way, cutting did not seem to introduce artefacts. Screens 7 and 8 show the results, zoomed in first to focus on the upper frequencies and then the lower. You can see the very fine dark lines where I have removed the sound, showing how delicate I have had to be. 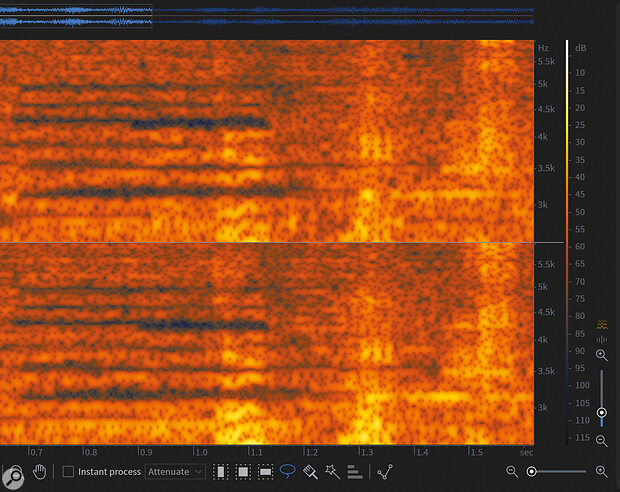 Screen 8: ...and the low frequencies.

As with any piece of complex software, it takes patience to get the best from RX, and the more manual input you give it, the better the results are likely to be. I liken it to restoring a painting: it takes delicacy, patience, passion and skill, but the result is a juice worth the squeeze. And with RX8 launched as we go to press, the tools for squeezing it are getting ever better.

Download WAV versions of these audio examples to use in your DAW.