Inside Track: Pop Smoke 'The Woo'

Secrets Of The Mix Engineers: Jess Jackson By Paul Tingen 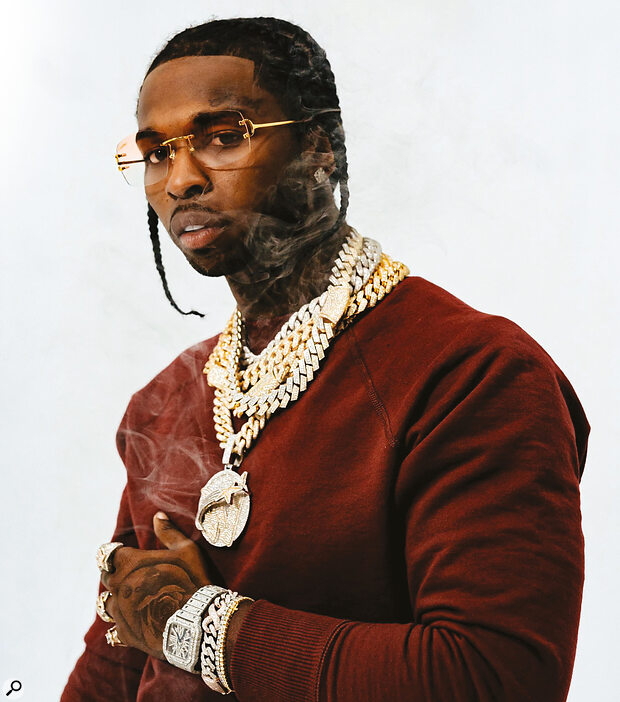 The lead single from Pop Smoke’s posthumous debut album was stitched together from two demos in different keys. Mix engineer Jess Jackson turned it into a piece of pop magic.

“Our brains don’t like symmetry. We are programmed not to like perfect symmetry. Instead we like imperfection. And we like thirds. So I don’t look at my speakers as left and right, I look at them as two independent mono channels. I may use a completely different reverb on the left as on the right, or EQ things differently on one side than on the other, and so on. I’m not much of a stereo guy. I wouldn’t just put things in stereo and let them live symmetrically in the speakers.”

Speaking is Jess Jackson, who explains that he likes to “analyse the human mind and why it enjoys certain things and not others”. When asked what he means about humans thirds, he replies: “I apply the rule of thirds from photography and painting to mixing records. I see music visually, I don’t hear it with my ears per se. So I frame things visually, splitting width and depth into three areas.”

Jackson’s love of analogue is also in part informed by his adherence to the rule of thirds and his quest for imperfection. “When you pan things left and right on an analogue desk, they’re not 100‑percent the same, because there are electronic idiosyncrasies inside each channel, and this is going to give you a slightly different sound on the right and on the left. Essentially you get a pseudo‑stereo acoustic environment that is not perfect. The problem with digital is that you need to go out of your way to achieve imperfection. But with analogue you achieve imperfection accidentally, and our ears tend to really like that.”

Reading the above without having seen Jackson, you could be forgiven for assuming he’s been in the business for decades and has long since stopped making cutting‑edge records. Nothing could be further from the truth: at 39 years old, Jackson is in the prime of his life, and he’s recently mixed and/or co‑produced 32 tracks on one of the biggest albums of 2020, Pop Smoke’s Shoot For The Stars, Aim For The Moon.

How the album came into being, after Bashar Jackson, aka Pop Smoke, was killed on February 19 of this year aged only 20, is an interesting story in itself, on which Jackson touches further. But first he elaborates on his idiosyncratic viewpoints and methods, which he applies for the most part in his own studio in Los Angeles.

“I have Pro Tools HD in my studio, as well as an SSL Sigma summing mixer, Amphion BaseTwo25s paired with Two18s, and Tannoy DMT II speakers,” explains Jess Jackson. “I have the latter because they’re dual‑concentric and I’m hyper‑sensitive to phase. If something is playing up with phase I correct it immediately, mostly using iZotope RX’s Azimuth. I have two Antelope Goliath 32‑channel I/Os, one for my SSL console and one for my outboard gear. I have all my outboard on inserts, so they come up as plug‑ins in my Pro Tools sessions. Once I have the sound I want, I commit it and print the part in the session. I’m not someone to use many plug‑ins, as I prefer analogue gear most of the time.

“I also often use sampling keyboards as outboard,” Jackson continues. “My associate Sage Skolfield and I ran every sound on Pop Smoke’s album through one of my vintage hardware samplers. It is part of my process. I run them as inserts in Pro Tools and commit them like they are already mixed. It usually doesn’t need much else. Every sampler has a different sound, so you get different coloration, distortion and transients. You’re introducing nice artefacts that are like analogue. It unites the sounds, as if they are coming from one original source, which was my aim with Pop Smoke’s album, as the material came from different producers, studios, etc.” 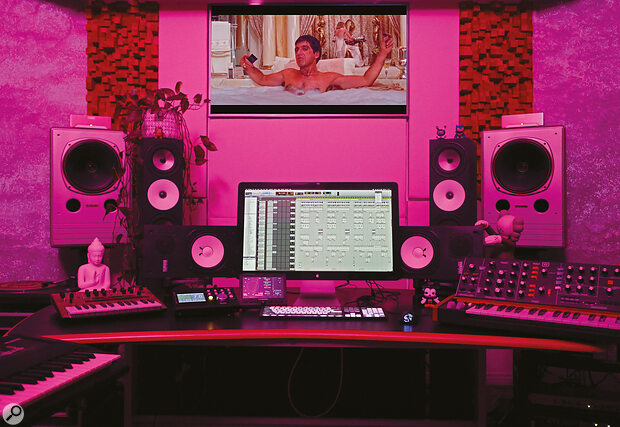 No Place To Hide

It’s not just phase for which Jackson has a well‑tuned ear. “Kanye, Pharrell, Mike Dean, Dr Dre, all the greats, all their drum sounds came from one source,” says Jackson. “I can most likely listen to any beat and tell you whether it was derived from Ableton, FL Studio or out of an ASR‑10, MPC or Emu SP‑1200, for instance. I learnt a lot about vintage drum machines from working with Mike Dean, who is my mentor and friend. One golden rule I learned from working with Mike is that if something needs to be turned down, take it out. It’s either present in the song, or it’s gone. There’s no hiding things.

“I approached the Pop Smoke album like this also. If you’re doing very heavy drum‑driven tracks, why be delicate? We’re not making a detailed painting. I once visited Picasso’s house in the south of France, and saw that he was not using small paint brushes. He was using three‑foot paintbrushes and standing back from the canvas. It was about the bigger picture, rather than the fine detail. I try to apply the same concept. As a result, I barely solo tracks. I only solo to see what I have and maybe if I need to work on a troubling vocal breath, or something like that. I don’t understand why people regularly solo all their elements. You’re not hearing them in their correct context. You’re not seeing the bigger picture.”

Jackson was born in London in the ’80s, where he made a connection with the world of music very early on via his father, who was an underground rock & roll guitarist. As a teenager, Jackson began producing music in his bedroom and at age 17 he produced a song called ‘Hobson’s Choice’, released under the name Active Minds, that laid some of the foundations for the UK garage genre. It has been credited with changing UK garage from funky and soulful to more dark and bass‑heavy. Jackson continued to make music, spent a lot of his time DJ’ing, and at 21 signed to Pure Silk, a UK garage label. 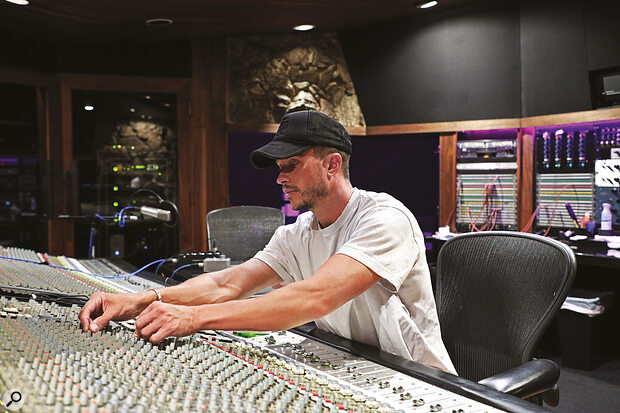 From humble beginnings in the underground world of UK garage, Jess Jackson now works with some of the biggest names in US hip‑hop.

He recalls: “I was DJ’ing on pirate radio, in nightclubs and rave warehouse parties and Pure Silk’s Ibiza club. When I was 23, my mother introduced me to Pete Townshend. They had met by coincidence because he lived down the street from her, and Pete offered me a publishing deal with his Eel Pie Publishing company, and this included money for me to buy some equipment. I’d been working with a rudimental setup consisting of a cheap computer, the Atari 520ST with Cubase 1.1, and an Akai S3000XL sampler. I was into Cubase and Logic 4.2 at the time, but Pete insisted on me buying a Digi 001, because he said I needed to learn Pro Tools! That was life‑changing!”

In 2006, Jackson moved to Los Angeles, and quickly became involved with the hip‑hop scene there. As an engineer and producer he worked with the Knux, and Fredro Starr of Onyx, and later became Tyga’s main producer. He also worked with Kanye West and Mike Dean on Tyga’s fourth album, The Gold Album: 18th Dynasty [2013]. In addition, he worked with the likes of Chris Brown, Nicki Minaj, Busta Rhymes, Lil Pump and Pusha T, the latter on the Grammy‑nominated album Daytona. Jackson also has an acumen for business, and has founded or co‑founded a number of publishing and record companies. As of 2016, he is co‑owner of Antares Audio Technologies, the creators of Auto‑Tune, and he is closely involved with new developments at the company.

“I got into mixing more recently, to be honest. I’d been doing a lot of production and engineering for Tyga, and working with Chris Brown as well, and I was sending the tracks to Serban [Ghenea] to mix. One day he was like: ‘What do you want me to do to this? You’ve taken it as far as it can go.’ This was around 2012. That gave me the confidence to do mixes myself. So I sharpened my tools, used speakers that were more mix‑friendly and had my room acoustically treated. Serban has this great, polished pop sound, and I wanted to take that consistency and polish into the hip‑hop domain, while retaining some of the rawness.

“Mike Dean also took me under his wing, and I’ve learned so much from him. We constantly share all of our new discoveries and tricks with each other. I was talking with him recently about what it is that we do, and we thought of a whole new title, which is ‘finisher’. We mix, we master, we add production, we reformat songs, and so on. We don’t do just one thing, we do everything that’s necessary to finish or even start a record from scratch. I can get bored easily, and I like creating. I do photography, I’m really into vintage cameras and I buy canvases and paint. I enjoy anything artistic. I don’t like putting myself in a box, I just like to create.”