Secrets Of The Mix Engineers: Jess Jackson By Paul Tingen

Jackson’s idiosyncratic talents, and his unusual position as someone who straddles the worlds of not only hip‑hop and pop, but also UK and US music, were what got him involved in working with Pop Smoke. Jackson first worked on Smoke’s second mixtape, Meet The Woo 2, released on February 7th of this year, and in that same month the rapper flew over from New York to LA to work on what was to be his first album.

Soon afterwards Pop Smoke tragically died in what is assumed to be a burglary gone wrong. It was a devastating blow. After much reflection, Victor Victor label founder and CEO Steven Victor and rapper 50 Cent, both working as executive producers, decided to finish the album, in Smoke’s memory. It ended up taking four months. “The album was only going to be 10 songs,” explains Jackson. “The plan was to drop multiple albums throughout the year. Instead, after he passed away, the decision was taken to pull all the songs together into one collective body of music. So the album ended up being 34 songs.

“Victor got me involved because Pop Smoke’s sound is UK drill, essentially. I am from the UK garage and drum & bass world, so I understand UK drill and rap, but also American rap. I presume they thought I’d be a good fit. I worked with Steven Victor, Oggizery Los and Pop Smoke almost every day on Meet The Woo 2. After he passed, my work on the album was finished in my home studio with just myself and Sage, but this was also due to Covid‑19 and lockdown measures.

“Many of the songs were incomplete demos, often recorded very roughly at people’s houses. It was stuff that we’d otherwise have re‑recorded with him. There were some tracks that were maybe only 30 percent ready. Although my main credit on the album is as a mixer, I was often changing out kick drums and snares and doing other changes to the production, because when it came to the mix, there were things that sometimes didn’t feel right. When you get to that finishing phase, you start to realise how certain things don’t always fit together so well, and you take out elements or change the arrangements in other ways.” 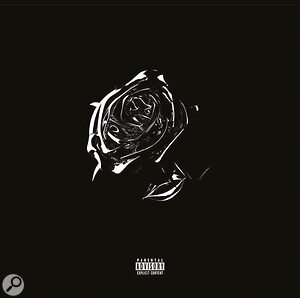 In recognition of his work, Jess Jackson ended up with additional production credits on four of the songs on Shoot For The Stars, Aim For The Moon, including on the most successful single of the album, ‘The Woo’, which also features 50 Cent and Roddy Ricch. The song started with a production by UK beatmaker 808Melo that was based around a Spanish guitar with a drill beat underneath.

“When I received the song, it was only Pop’s hook and Melo’s beat, lasting about 50 seconds. It didn’t have 50 Cent and Roddy Ricch on it yet. Then Ben Lust, A&R of Victor Victor, and myself found another verse by Pop on one of the hard drives from another version of the song. It seemed to fit, but it was in a different key. My associate, Sage Skolfield, tried several things, and we attempted to Melodyne the vocals up by a fifth, but it sounded too Mickey Mouse. I called Mike Dean, and he suggested that I just create a key change in the song. It appears in bar 57. I wasn’t sure it would work as it’s risky, but it was a genius idea!

“From a sonic perspective, the song initially sounded a little muddy, and busy. There was a lot going on. I wanted to get it to a place where it could thrive with its busy‑ness, and it also was my job to choose what the most important elements were, to make sure those stood out, and to find a way of hiding the elements that are not so important. Panning and placement of sounds are also very big for me. Obviously, the main element that carries the song is the guitar. You could mute all of the drums in this song and just keep the guitar, and it would still be a hit record.”

Jess Jackson: There’s something about the sound of analogue... When you mix in the box it’s clearer, sharper and more immediate. But at the end of the day it sounds less like a record.

Jackson’s mix of ‘The Woo’ made extensive use of his outboard rack. With even the likes of Michael Brauer now opting to mix in the box, it’s an increasingly unusual preference. “There’s something about the sound of analogue,” says Jackson. “When you mix in the box it’s clearer, sharper and more immediate. But at the end of the day it sounds less like a record. I’d rather go for something that sounds like a record and that has a vibe, than use gear that sounds pristine.

“There also are small issues with ITB mixing, to my ears. I find that when I add plug‑ins on top of other ones, the sound becomes wishy‑washy and almost diffused. It becomes less immediate, less true to the original. It sounds anti‑aliased. I prefer to do level rides on the VCAs of the SSL over using the DAW faders.

“I use Pro Tools because there are certain things in the workflow that I just cannot find in other DAWs, but because of what in‑the‑box does to the sound, I use analogue in conjunction. I’m not doing it for the process. I’d actually prefer not to have to press buttons on hardware. It’s a nightmare. The fact that I have to recall stuff in hardware is also something I wish I did not have to do. It really is purely about the sonics that I want to achieve.”

Returning to the subject of his mix of ‘The Woo’, Jackson focused on his treatment of some of the most important elements, starting with the guitar. “To me it sounded overly dynamic. I wanted it to live more in a pop space, and get rid of peaks and transients that were too sharp. The track was printed back into Pro Tools after having gone through my old SSL channels that came out of an original G+ console. I did some edits on it, to correct the timing in some places, and I also flew the part around in some places. I then used a UAD 1176 to compress the guitar some more, and I widened it slightly with the Brainworx bx_solo plug‑in.” 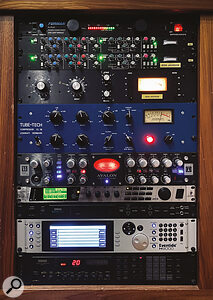 Jess Jackson made good use of his collection of outboard when mixing ‘The Woo’. His rack comprises two racked SSL G+ channel strips, an 1176 compressor, a Tube‑Tech CL‑1B, an Avalon channel strip, a Behringer V‑Verb Pro, a Yamaha SPX‑90, an Eventide 000 and a Yamaha Rev‑7.The main hook group tracks include some plug‑ins, but also made extensive use of Jackson’s outboard, as he explains: “The hook section came to me as a Pro Tools session, so I could switch out the plug‑ins if I wanted. The vocals had Auto‑Tune Pro, but I changed it to Auto‑Tune Live, because Live had been used on many of the other sessions, and I wanted to keep the sound of the album consistent. The delay effects come from my hardware Eventide 000, and V‑Verb is my Behringer REV2496 V‑Verb Pro, set to a plate sound. As for the SPX90, I wanted that famous ’80s reverb sound used on a lot of rap from the early ’00s. It’s the main effect I used on the lead vocals in the track. The Yamaha Rev‑7, meanwhile, has a shorter, metallic‑sounding reverb that you can’t really get from modern plug‑ins.

“I applied the plug‑ins only very subtly. They were more used as an afterthought or for an additional tweak. I use the McDSP AE‑400 [dynamic EQ] to carve out some frequencies. I love that plug‑in for subtractive EQ — it does not actually compress the frequencies. The SoundToys MicroShift is on a backing vocal throw at the end of his hook; I wanted something to shoot over into the verse. I also slightly detuned the vocal with the MicroShift. I am a big fan of the Roland Dimension‑D, for its widening capabilities, without putting your signal out of phase. I have access to real Dimension‑Ds, so would typically use that, but in this case it was just quicker to do the one throw with the MicroShift.

“One of the most tedious tasks was left up to my assistant Sean Solymar, who created all of the clean edits for the album. He did a great job and found very creative ways of hiding cuss words in extremely explicit songs. The screenshots are of the clean version, and you can see many instances of tracks that have ‘clean’ in the comment box, which means words were taken out, and the track below it has words that fill the gaps that were left. For example, there’s an a cappella from 50 in green, and you can see how I chopped up the vocal to be able to rebalance the vocal using Clip Gain, and also adjust some timings. Below that is a track with the clean words.”

According to Jackson, he was “changing arrangements and parts right up the last minute, even while mastering.” Interestingly, he doesn’t put any plug‑ins on his master bus. “No, I don’t do anything before I master. I can get ‑8 LUFS coming back from my SSL console, without worrying about using limiters or any of those enhancers. I did the mastering on this track with some help from Mike Dean, but cannot talk about this in depth. Typically it’s limiting, EQ and some Mid‑Sides stuff.

“You can see in the screenshot that I have two inserts on the SSL IN track, and they are a little secret that I do. Inside of the SSL there’s a parallel mix bus, so you have Mix A and Mix B, and you can blend Mix B in to taste. We built some harmonic distortion and coloration tools which are set up as inserts on Mix B, which is like a parallel, adding a bit of colour, as required. That is how I can get to loud RMS places without the need to have stuff on my master bus. Because when I come back into Pro Tools, I am hitting zero on the converters, and I am at mastering engineer levels without breakup or clipping or artefacts. I’m very excited about working this way.”

It’s the last step of Jackson’s job as a ‘finisher’, after an unusual process that includes much analogue hardware, asymmetry, the rule of thirds, and more leftfield approaches, which surely are vindicated by the enormous success of Shoot For The Stars, Aim For The Moon. Food for thought…

At the bottom of the session are about 14 aux effects tracks, with the last one going to a hardware Yamaha SPX90, a blast from an ’80s past if ever there was one! Especially notable in the session are the main guitar track, in purple, and the fact that there are relatively few plug‑ins in the session, the only exceptions being the hook backing vocals and 50 Cent’s vocal track. There are, however, many sends on the vocal tracks, going to aux effect tracks that in some cases have outboard inserted.

Five pink tracks in the middle of the session constitute Pop Smoke’s vocals, with Auto‑Tune Live on them, and they go to two yellow aux hook tracks and a dark red verse aux track. The hook group tracks have tons of sends called things like V‑Verb, Rev‑7, Delay, Doubler and so on, while the verse aux also has the McDSP AE‑400 and SPX90.